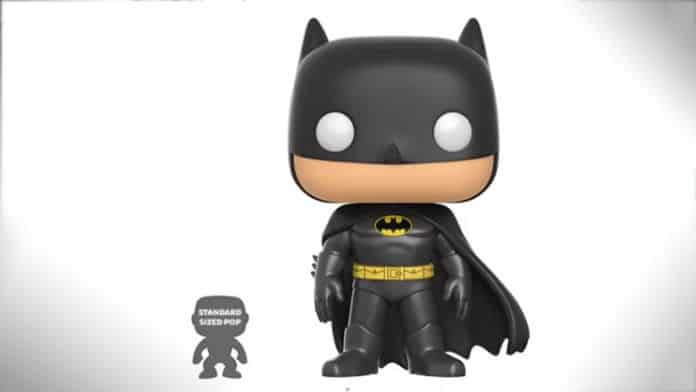 You either die a hero or live long enough to see yourself become a POP! figure. In this case, a super-sized POP! figure.

This 19-inch Batman Funko Pop! figure sports his signature black cape and cowl with the iconic black and yellow emblem on his chest. The oversized POP! towers over the smaller figures. It’s the ultimate collectible for Batman and POP! fans alike.

With a 19-inch POP! Batman on the scene, there’s no way Joker, The Riddler, Penguin, or Two-Face are going to get away with anything. Super-sized Batman, equipped with his trusty utility belt, will stop them in their tracks — especially since they’re 15-inches shorter than this gigantic Batsy.

The city of Gotham has never been safer. Average-sized Batman needed an extra edge over his worst villains, and now he’ll stand tall even when next to his more vertically gifted foe. Killer Croc, Clayface, and Solomon Grundy are no match for the 19-inch POP! vinyl of The Dark Knight.

Keep him protected in the window display box or set Batman free to let the Cape Crusader do what he does best – stand perfectly still while his cape blows dramatically to the side. Even as a vinyl figure, Batman is an imposing force that villains should fear.

Complete or start your Batman POP! collection with one of the most unique Funko figures you’ll find of The Dark Knight. The 19-inch Batman is the first super-sized vinyl in Funko’s POP! line and will likely be the pioneer for future releases.

The only thing this oversized vinyl Batman needs to hope is that Funko knows an equally-as-tall Joker POP! would be devastating for all humanity. Before that happens, pick up this Batman figure and enjoy a collectible that’s almost the same length as a human baby.

Previous articleNightmare Before Christmas Ugly Halloween Sweater
Next articleAlien Queen Wall Statue 1:1 Scale
Bobby Bernstein
Bobby is the co-owner of Nerd Much?. Bylines at Heavy, Den of Geek, HiConsumption, and More! Like his nerdtastic tweets by following @Thirstiestgamer on Twitter..