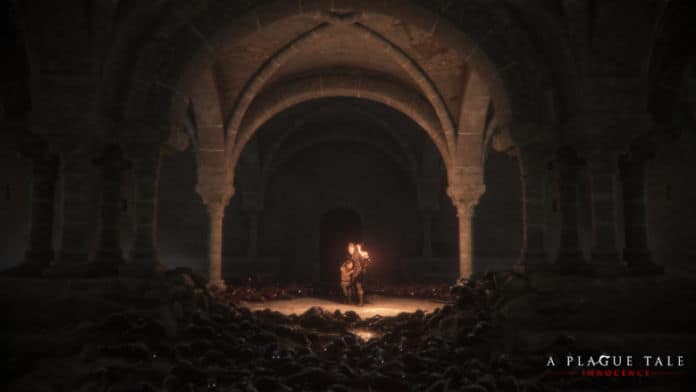 The Black Plague was one of the most destructive events in human history. It’s a period of misery, suffering, paranoia, and cruelty that is ripe for exploration in video games. Enter developer Asobo Studios’ horror/adventure game, A Plague Tale: Innocence. Recently, we got a chance to play the first three chapters of the upcoming game on PC. Keep in mind, the game is set to release in May, so we will be focusing less on bugs and more the core experience.

Set during the Hundred Year War, players assume the role of a teenage girl named Amicia. Born into nobility, Amicia’s world is turned upside down when the Inquisition raids her estate. As events unfold, Amicia eventually becomes responsible for her younger brother Hugo who is sick with a mysterious disease. What followed was roughly two hours of trying to find the location of a doctor in a town afflicted by this deadly plague.

Asobo Studios has done a terrific job of creating a world that feels lived in and accurate to the time period. Navigating the spiraling, often complex streets of a medieval town feel ripped right out of reality. Despite being a  linear game, A Plague Tale consistently kept the environment both intriguing and engaging. Whether this will continue throughout the rest of the game is unknown, but I saw quite a lot of variety during my time exploring this world. 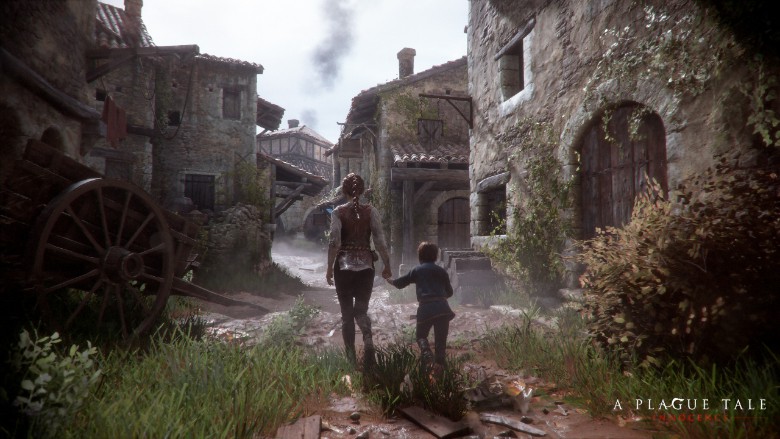 Visually, A Plague Tale offers some impressive lighting and details on PC. There’s a restrained use of colors as one progresses through the first few chapters. Much of this is due to the horrific and often dread-inducing themes that Asobo Studios is attempting to portray. Light quickly becomes the most critical aspect of A Plague Tale, both figuratively and literally. As this disease spreads through the land, the world seemed to get darker and more desperate.

Yet, the light also appears to be A Plague Tale: Innocence’s key mechanic. Outside of human enemies, Amicia must contend with hordes of diseased rats looking to turn you into their next meal. It’s a horrific concept alone, but Asobo masterfully treats these beings as a force of nature. Moving like a swarm of ants, the rats will cover anywhere light doesn’t touch. Just shining a light on them will cause the rats to part like waves crashing against a large rock.

A lot of the puzzles we encountered focused around manipulating and using light to create a safe passage. Given that Amicia will die if she comes into contact with these vermin, careful planning and timing are key. However, I am concerned about how many times “Use the light to scare the rats” will work as an engaging gameplay mechanic. It will be vital that the game constantly presents more complex puzzles instead of simply lighting torches or knocking down large lanterns. 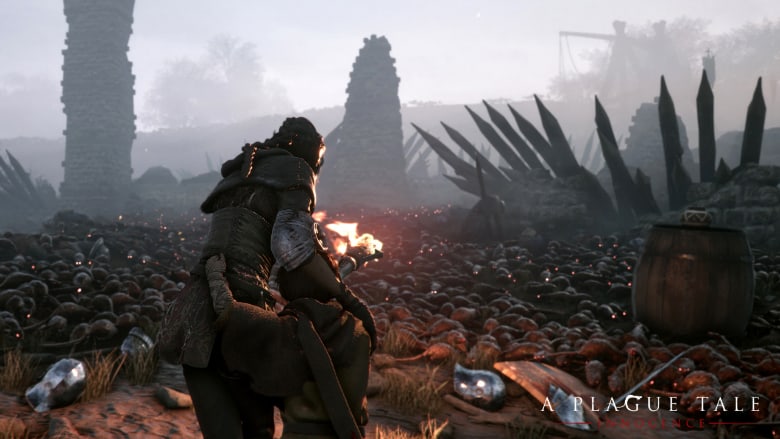 There’s also a stealth mechanic for the human sections, but it’s fairly standard. Amicia and her brother can hide in tall grass, use objects to distract guards or sneak around patrols. Her weapon of choice is a sling, however, the player isn’t encouraged to fight unless it’s absolutely required. We also had a boss fight that was fairly tense, mainly because she can die in a single hit.

A Plague Tale: Innocence’s real driving force is the story and relationship between the siblings. From what we saw, there was some solid writing and voice work on display. Some of the moments involving Hugo were a bit cliche, but the chemistry between the leads made up for some odd script choices. Something beyond the plague is clearly going on here and we only got small hints at what that could be. There’s more to this story, especially around the waves of vile rats taking over the countryside.

While there is still a lot unknown about what direction A Plague Tale: Innocence plans to go, the first three chapters certainly caught my attention. In an era of big budget games and open world RPGs, A Plague Tale: Innocence feels like a throwback to an earlier era. Its emphasis on a strong, polished linear story was clear from the moment I picked up the game. If the gameplay continues to evolve and challenge the player, this may be one indie horror game worth checking out when it launches on PC, Xbox One, and PS4 in May.

Previous articleKingdom Hearts III Critical Mode, Paid and Free DLC in Development
Next articleToeJam & Earl: Back in the Groove Review: Not So Funky
Collin MacGregor
Collin is a complete film geek and the one person who actually likes playing the medic class. When he's not raiding in Destiny, making poor choices in Dark Souls, or watching Mad Max: Fury Road for the 100th time, you can find him writing for Nerd Much and Heavy.