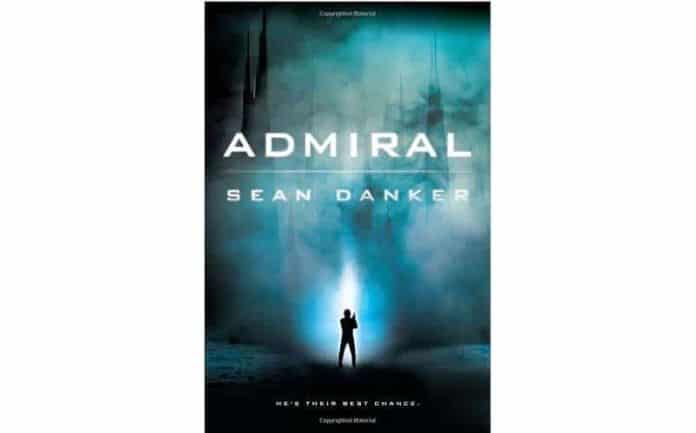 Admiral is the first installment in the new military sci-fi series Evagardian, and marks military man Sean Danker’s debut as an author. This book reminded me vaguely of The Martian but with a much darker twist; the protagonist, referred to only as the Admiral, wakes up from a sleeper pod with three imperial trainees on a seemingly deserted alien planet. Their ship is without power, the systems apparently sabotaged, and all three trainees are suspicious of the Admiral, who doesn’t seem like an admiral at all. They have no choice but to trust him for the time being, however, as his knowledge may be the key to their survival. Also, it turns out that they are very much not alone on this mystery planet.

The use of the first-person point of view was both interesting and mildly annoying at times; the Admiral is the one narrating the story, yet his internal monologue never betrays his true identity. One of the other characters manages to work out the truth (or something close to it) and there is an ensuing dialogue in which neither openly verbalizes it, which seems far-fetched. She also never relays the information to the other characters, even though they are clearly dubious of his claims. It’s a huge secret for no apparent reason, even after it’s actually revealed. He could have easily earned his companions’ trust had he just told them, so it’s not really clear why he didn’t. Could have been guilt, I suppose, but it felt like a rather cheap plot device.

I can’t deny that it works, though. This mystery is the main point that drives the story, even more than how the characters are going to get out of their current predicament. Yeah sure, I want to know how they’re going to survive, but more importantly: who the heck is this guy?

Also, I think the author asked himself: “What’s the most terrifying alien life form I could possibly come up with?” [toggle title=”Spoiler below” load=”hide”]The answer, of course, is gigantic spiders that, in their larval form, can infiltrate the bloodstream and turn their victims to ash.[/toggle]
Well-played, Sean Danker. My skin was positively crawling by the end of the book.

There are a total of four characters in the entire book, and while we don’t get to know them on an intimate level, each is interesting in their own way. They initially come across as one-dimensional military personnel (which I think the author intended), and while there is not a ton of room for character development due to the fast pacing and short length of the book, each reveals something of their true nature when faced with repeated crises. I especially liked Deilani, and almost think the book would have been more interesting from her point of view; she was intelligent, witty, and her open contempt for the Admiral in critical situations made for some amusing dialogue.

The reader is dropped into this universe with zero backstory aside from the fact that a war just ended, and the plot begins moving at a breakneck pace; one might expect to feel lost in these circumstances, but that is not the case. More background information might have made the ending less anticlimactic, but it in no way hindered my enjoyment of the story. Hopefully in the sequels we get to see more of the fascinating world that Danker has built, as well as the characters’ stories, which are only alluded to in Admiral. It’s unclear at this point whether we’ll actually see more of the this unlikely team, but I certainly hope so.

It will also be interesting to see how the author drives the plot from here on out, with that core mystery having been solved. He’s demonstrated his ability to write a gripping plot, however, so it may well not be an issue; also, we know the basics but we still don’t really know who he is. Like the other characters, there was a scant amount of backstory and we don’t really know how he came to be…well, where he was. I’ll say no more, to avoid spoiling it.

Minor complaints aside, this was a fun, atmospheric story that was difficult to put down. The tension mounts throughout the book as the characters continually solve one problem, only to be immediately faced with something more dire. Every small victory is followed by a huge setback, which feels rather contrived at times but is still thrilling. We would recommend this to sci-fi fans that are looking for a lighter read, and can’t wait to see what Sean Danker has in store for the rest of the series.

Buy a copy of Admiral here.