I don’t have children myself, or younger siblings, but for much of my adult life I’ve had students. Students I’ve tutored, students I’ve taught in classroom settings, and students I’ve worked with via non-traditional/extracurricular education. This story comes from the latter (all names have been changed to pseudo names for privacy purposes).

I’m currently working at a STEM summer camp for grades 1-8 and, sadly/unsurprisingly, it’s mainly boys. Despite the racial diversity present the gender demographics are still <10%-15% girls. And they notice. Here are just a few observations these young women have made aloud: “I thought  there’d be more girls at this camp.” “Were there more girls last week?” and “I wish there were more girls here.” But I was moved by how quickly these girls took that negative and used it to root themselves in positive affirmations

“At least the teachers are all women” —Desire, Grade 6.

“That’s why I have this shirt that says girls can do anything” —Abby, Grade 5

“Girls can do anything. A long time ago girls weren’t allowed to do stuff, like math and science. But now we can” —Zia, Grade 1.

Growing up, I had only a few friends and none of them gamed. The media I consumed, and even stereotypes today, tell me that video games are for boys and that to embrace gaming is to reject femininity. Even women can propagate this stereotype by adapting an “I’m not like other girls” persona.

All of this served as backdrop when my student, Andrea’s, eyes lit up when she found out I knew about her favorite game: Animal Crossing.

What did I know about Animal Crossing? Admittedly, not much. I knew the premise and could name a few characters but I was far from being a part of the community.

I had Animal Crossing: New Leaf. I even started it up, named my town and everything. But that was back in January and my town has been collecting dust ever since.

I told Andrea I’d bring my game and 3DS in so she could show me the ropes when we had our scheduled breaks between class sessions. It was an eye opening experience to say the least. Those outside the Animal Crossing community may look at this series as childish and trivial but try picking it up without any help and let me know how it goes.

Seriously. I need someone to mail me a walk through for this thing.

Upon loading up my town, Lagunita (because Lagunitas didn’t fit), I emerged from my tent looking busted as hell. My hair was disheveled and I was sweating from the clothes I had picked out in winter. I had zero bells and no clue where to start. At this point Andrea became my Sherpa.

The majority of my time at work was instructing so it was a heartwarming and humbling experience to have this young, enthusiastic gamer teach me something for a change.

Animal Crossing is a long, step by step process

In order to get my hair fixed I had to go to a salon, which I don’t have in my town. Fortunately, Andrea’s town did have a salon. Andrea’s town had everything since she’d been playing this game since the day it came out. But to go to another person’s town I needed an I.D. which costs a few hundred bells… I had zero bells.

So now it was a matter of getting money. Apparently you can shake the trees and fruit will fall out (which you can sell) and even money falls out sometimes. It wouldn’t take long to get my I.D. money. But as I furiously shook these trees a bee hive fell out. “What do I do? What do I do?? How do I run” but it was too late. Andrea told me I’d need medicine to get rid of the swelling which she offered to give me when I arrived to her town. With a swollen face and a bird’s nest of hair, my I.D. photo was more mug shot than mayor (not that the two are mutually exclusive).

Upon arriving to Andrea’s town she kindly gave me 50,000 bells because she has a Jay-Z level cash flow (what’s a couple dollars to me). She also hooked me up with some adorable clothes for free and taught me that I could accessorize with the flowers I found.

Hair proved to be its own ordeal. In classic Animal Crossing fashion I had to google a chart that would show me what answers I needed to give the stylist in order to get my desired hair cut. 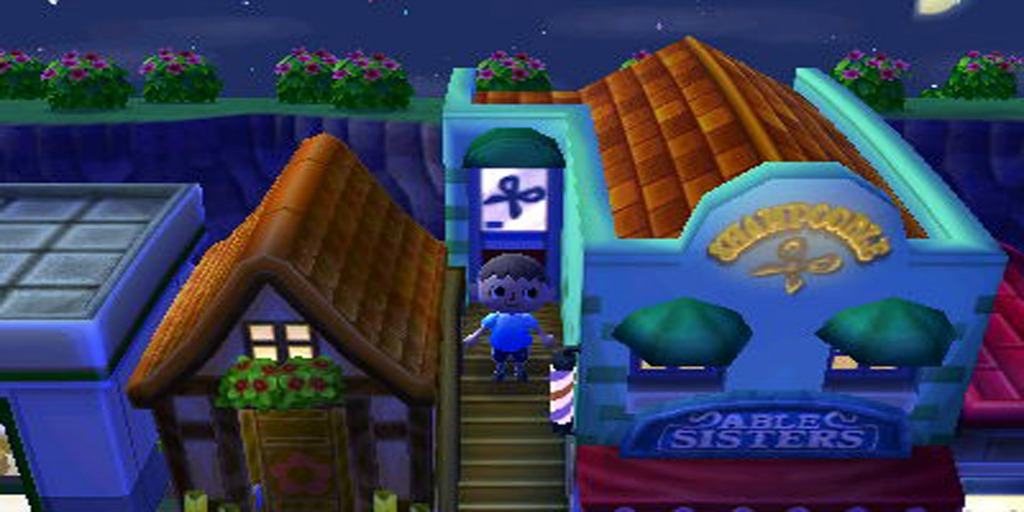 By the end of our short Animal Crossing sessions, I had a nice outfit, combed hair, and had made the first? payment on my house (I’m still not entirely clear how all of that works). Now that camp has come to an end, my job is to not undo all the help Andrea has given me and to take what I’ve learned and build upon it. Her guidance and generosity was helpful but what stuck with me the most is the how layered this charming game is, how genuine her Animal Crossing love and expertise was, and the entire experience reminded me how much I value the gamer girl community.

Andrea gave me a lot of Animal Crossing information and, to be honest, it was a little too much to process/fully retain…. but it reminded me of myself when I was a kid. She genuinely loved Animal Crossing. And because of that she not only knew the ins and outs of the game, she wanted you to know them too. During lunch time, or when she was waiting to get picked up, she’d regularly walk up to me and show me something that was happening in her town or explain a feature I wasn’t familiar with.

As we grow older, as gamers, we learn to rein in our passions so they don’t become pestering; but there’s something magical about that level of obsession because it’s so rare that a game will ignite that in us.

I remember feeling that way about Super Smash Bros Melee and Mario Party 4, two games I literally asked my brother to play with me every day for hours. I’ve been chasing that level of obsessive dedication ever since.

And there’s something beautiful about loving a game and wanting to share it with others in the hopes that it’ll have that kind of positive impact on their lives too.

Whether we game casually, seriously, or publicly (i.e streamers, YouTubers, podcasters, writers, etc), only a handful of games will resonate on a deeper level with us. But when they do we need to share that. Not in an aggressive or overbearing way, but in a way that’s kind and genuine. People won’t always love the games we love but, often, we simply forget to invite them in.

This was a reminder of not only how positive gaming can be and but, as a female gamer, how affirming it can be as well.

Games are for girls

For Andrea, I was primarily her teacher at STEM camp. But I was also visibility, proof that nerdy girls can grow up to be resilient nerdy women. I was an okay to shop in the men’s department when the women’s department offers only glittery Star Wars shirts. I was an example that gaming wasn’t all child’s play, with my 3DS next to my binder of lesson plans.

I’ve said it before and I’ll say it again, women make up half the gaming community. But as long as sexism exists, and plagues the industry, it will always feel amazing to meet another girl/woman who plays video games. Not because we are rare but because we fight so hard to claim a space here.

And over the course of that week something wonderful happened, another girl at camp saw the game and fell in love with it too. Now she’s asking her parents for a 3DS, if she gets one it will be her first console ever.

So when you love a game pass it on and always be willing to hear someone else’s out.