The giant snake was probably the best part of the Assassin’s Creed: Origins trailer, even to the seasoned Assassin’s Creed fan. According to creative director Ashraf Ismail, who has been kind enough to tell us almost all the gameplay details thus far, the snake isn’t necessarily any less “credible” than the fiction belonging to the rest of the series. Fiction which, I might remind you, contains things like magical artifacts and ancient alien races. 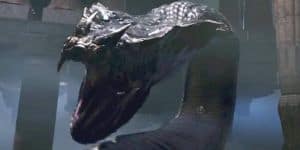 In an interview for the latest issue of the Official Playstation Magazine (OPM), Ismail commented on the number of questions regarding the giant snake. Some clearly unable to to reconcile such a creature with the rest of the AC fiction, but Ismail wants to make it clear that “Assassin’s Creed is a credible experience.”

He states that though the game has the aforementioned ancient alien race in the form of the First Civilization, the AC fiction won’t “go randomly high fantasy.” Ismail claims that the franchise has its lore, they don’t “really break that immersiveness by all of a sudden going fantasy out of nowhere.” He also gives a rather vague hint, asking us to think about how the main character, Bayek, would reconcile the existence of such a giant snake in his world.

Well. That very much depends on how accurate to Egyptian history Ubisoft is going to be. Judging by their past AC games, likely very little accuracy will be involved. That said, Ubisoft usually bases their “history” on the accumulated stereotypes that history has. For example, each successive Pharaoh did their level best to erase the history of their predecessors. It makes for a tough historical nut to crack in the first place, never mind that each Pharaoh mythologized themselves. Meaning that they in someway inserted themselves into the religion of the time. This could be compared to a kind of divine right to a throne, to actual heroic tales as a part of their god’s pantheon.

Let’s go with the divine right to the throne theory, as I believe this is the more commonly understood. The Pharaoh usually helped things along by believing that they were the embodiment of an already existing god here on Earth. By this logic, there are a few ancient Egyptian gods to choose from that favor snakes. Any on of them could manifest as a giant snake for the sake of AC‘s fiction.

What are your thoughts on the matter? Is a giant snake at all believable? Let us know in the comments below!