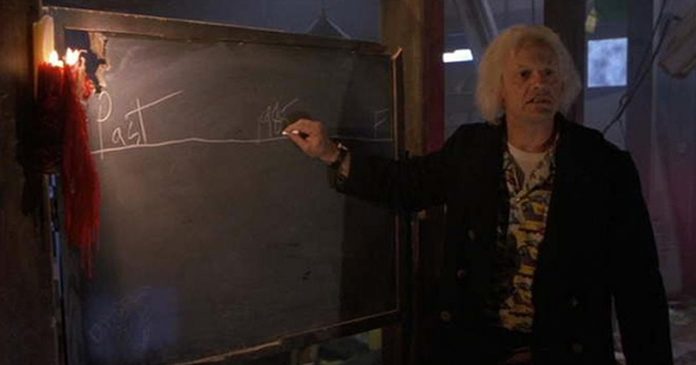 Back to the Future is a near-perfect movie. It is a masterful blend of genres; it’s a big special effects action spectacle, a fun twisty sci-fi thriller, a slice-of-life period piece comedy, an equal-parts romantic and buddy comedy and a sincere character-driven coming of age tale.

The movie has almost turned 35 years old but continues to be one of the most popular and talked about movies ever. Despite most people agreeing it is a great movie, plenty have discussed what they perceive as plot holes, and even Avenger Endgame calls out Back to the Future for mishandling time travel mechanics.

PLOT HOLE: George and Lorraine should recognize their son Marty as ‘Calvin Klein’ from 1955. 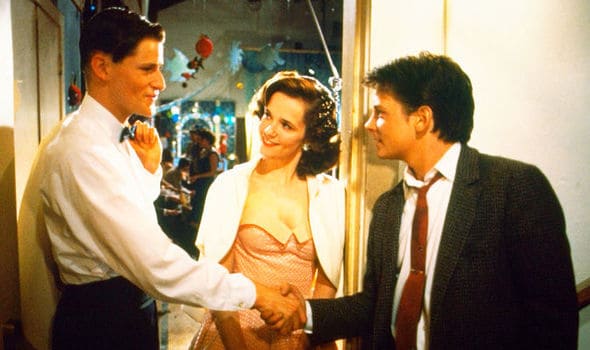 This is probably the most cited and discussed plot hole from the movie. The argument is that Marty McFly’s parents would remember the person who played a pivotal role in them getting together. Some argue that Lorraine should remember a significant high school crush.

While I used to think this was a plot hole, but now in my 40s with high school a distant memory, I totally believe Lorraine and George would only have a vague memory of what Calvin Klein looked like from 30 years ago. He was around for one week in their life and he wouldn’t be in their yearbook or any photos they’d have. I spent four years with classmates in high school who when I see photos of them that I don’t remember at all.

Some argue that Lorraine fell hard for Calvin, and she wouldn’t forget someone that significant. But in the original timeline, Lorraine fell in love with George largely based off him being hit by her father’s car. Since in the new timelines  Marty was the one hit by the car, she now crushes on him. Unless the ingredients for true romance were very different in the 1950s than when I was growing up, this is more a sign that a teenage Lorraine probably had a habit of crushing on boys and ‘Calvin Klein’ was just one of many destined to be lost in the sea of failed romances.

I dated a girl in high school for about a week and I am not even confident I remember her correct name and I definitely don’t remember what exactly she looked like.  I am sure at the time she was going to be the love of my life, and my feelings were probably as strong as Lorraine’s for Calvin Klein.

Lorraine and George likely do remember Calvin Klein but they wouldn’t have a picture-perfect vision of what he looked like 30 years later. Maybe they’d look at their son and think he sort of looked like someone from high school, but since they don’t have the benefit of having seen Back to the Future in their world, they likely wouldn’t scream ‘Hot damn, time travel exists!’ Screenwriter Bob Gale, who has been involved in almost everything about Back to the Future,  recently argued something similar.

PLOT HOLE: The Marty McFly from the new 1985 would have a totally different life and likely drastically changed things when going back to 1955 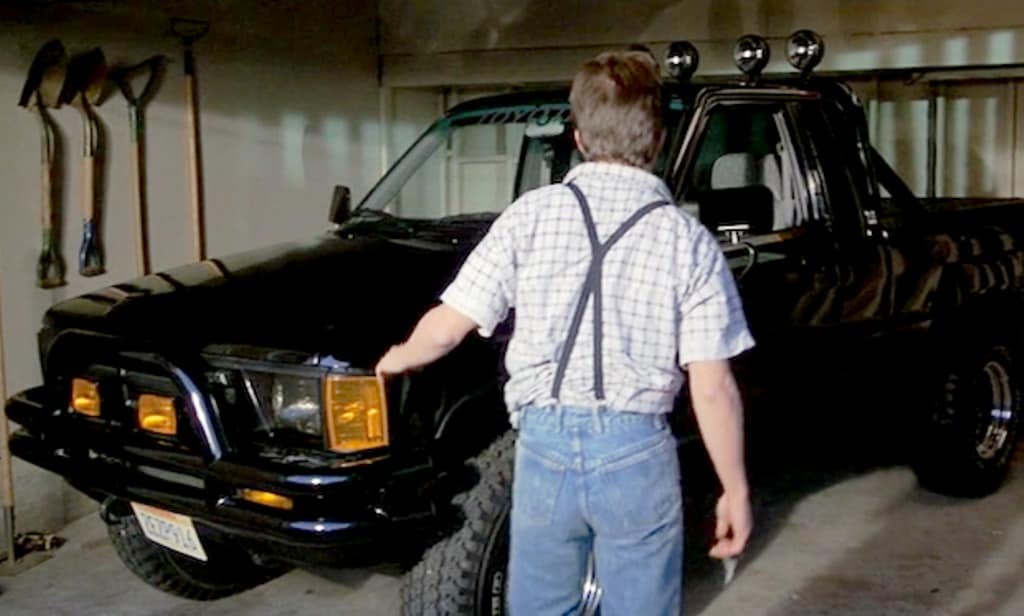 In the altered 1985, Marty’s life is much better and privileged than the one at the start of the movie, and this means that Marty would have been raised very differently. He also would have been given a different story on how his parents met since George was no longer hit by his future father-in-law’s car and the real event that triggered their relationship of dad saving mom from being raped wouldn’t have been a regular dinnertime story.

Those arguing this is a plot hole believe the new timeline Marty blasting off to 1955 at the end of the movie would likely royally mess things up or at least, definitely not do the things the way that the Marty we followed the whole movie had done. The Marty we followed may enjoy the life that he now has at the end of the movie, but it won’t last for long after privileged Marty is done stomping around 1955 Hill Valley.

Except Doc Brown would have expected that. We learn pretty quickly that Doc was pretty paranoid about time paradoxes and so he would have done everything he could to avoid them. Doc knows that he is going to be shot up by Libyans, so he got himself a bulletproof vest, so he also would have put measures in place to make sure the Coke 2 of Martys would have lived a life to prepare him to follow a similar path in 1955. Maybe Marty 2.0 did end up altering things and that is the reason that Marty now has that shiny new truck or that his girlfriend looks like Elizabeth Shue. 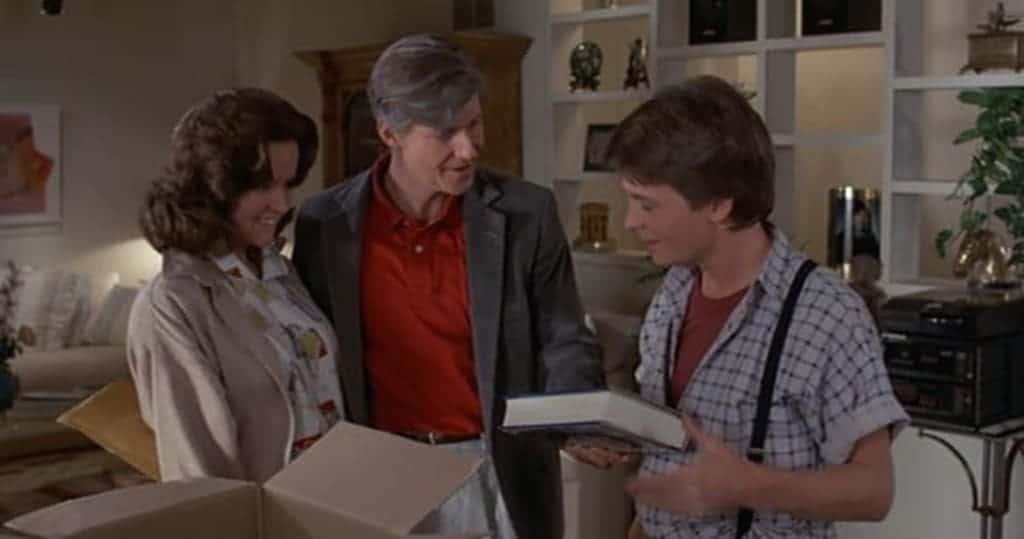 This isn’t exactly a plot hole, but it has been pointed out many times that the Marty at the end of Back to the Future would not know anything about this new life that was created by his actions in 1955. It is established that his life is drastically different, so this means when his family references a vacation or a memory that Marty wouldn’t know what they were talking about and have to mindlessly nod along with the stories. It would be pretty sad that poor Marty would not have any memory of all his happy experiences growing up. Plus his parents and siblings have turned out to be very different people, so Marty would feel like he was living in a house of strangers.

There is a good chance that Marty doesn’t remember anything from this new timeline because it just takes time for those new memories to start coming to him. Back in 1955 when Marty messes up the original meeting between George and Lorraine, he doesn’t get wiped out immediately. He gradually starts fading away even though he messed up the timeline where Lorraine has no interest in George. Much like that scenario, his memories would start adjusting to this new reality. We never learn how Marty’s life and memories go after this day because Robert Zemeckis wasn’t that interested in Back to the Future Part 4: Just a Normal Day for Marty.

PLOT HOLE: George only stands up to the jerk who cuts off his dance with Lorraine because of his newfound confidence. 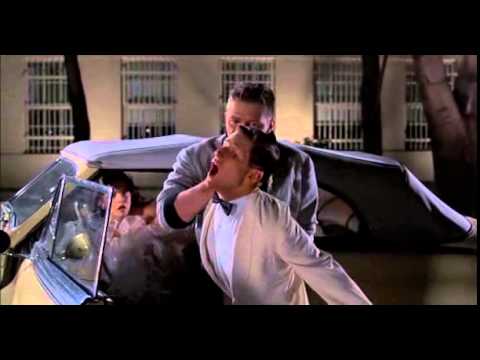 During the dance with ‘Earth Angel’ playing, George is just about to kiss Lorraine but then a previously unseen in the movie jerk cuts in and starts dancing with Lorraine before the true love kiss can happen. Marty is about to disappear again as it seems George and Lorraine will not fall in love. Of course, this is a new George McFly who just vanquished Biff and won’t be pushed around, so he stands up to the jerk and goes back to dancing with Lorraine. But the issue some have with this moment is that George only comes back due to his newfound confidence that he didn’t have in the original timeline. In the original timeline, how did George stop the jerk from stealing away Lorraine?

In this new timeline. George and Lorraine started dancing much later since this time they didn’t come to the dance together and they had the new confrontation with Biff. The band also was delayed from starting the song because Marty was stuck in their truck and the guitarist injured his hand. Originally, George and Lorraine would have kissed much sooner while the jerk was busy getting fruit punch. The problem with the jerk was caused by Marty altering the series of events. 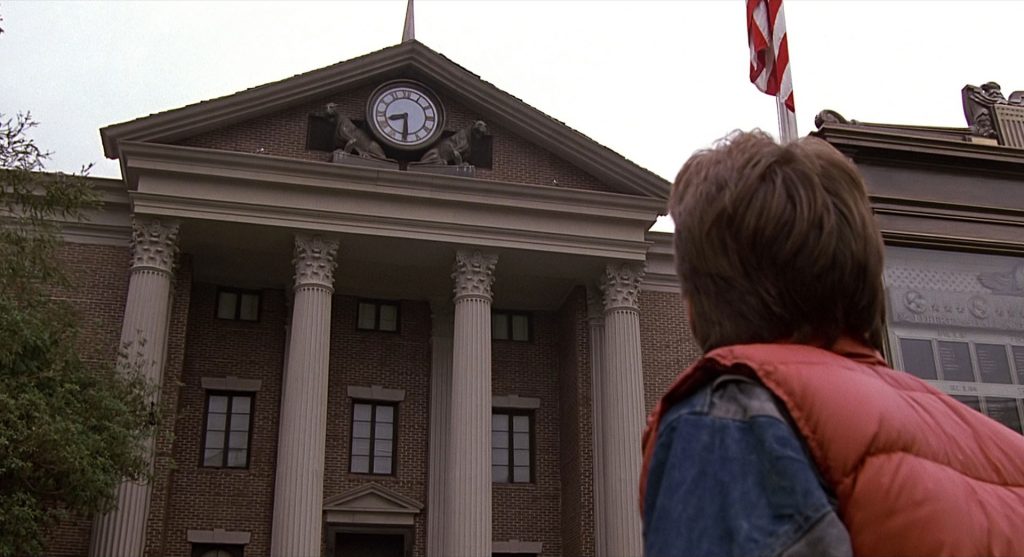 Marty gets back to 1985 because Doc harnesses the power of lightning about to hit the clock tower. Brown knows about this freak occurrence because he finds a pamphlet Marty has about saving the clock tower. Marty has the pamphlet because in 1985 there is a group of people adamant about stopping the demolition of a clock that hasn’t performed its one job for 30 years. The perceived plot hole is that since Doc redirected the lightning from the clock tower to the Delorean that the clock should now be working, which means there would be no pamphlet to alert Doc where lightning will strike. So, how does Marty get back to 1985 now?

Well, again Doc Brown is paranoid about time paradoxes and he would be aware they need to know about the lightning about to strike the clock tower. He would have made sure to short circuit the clock with one of his wacky inventions then blame it on lightning in order to birth the pamphlet armed defenders of broken clocks.

Disagree with any of this? You can angrily tweet at us here.

Christopher Spicer
Christopher is a freelance pop culture writer who especially loves analyzing movies. He could talk about movies all day, which is why it is good that he co-hosts a weekly movie review podcast, The Movie Breakdown. He also takes great joy in sharing the beloved movies of his childhood with his movie buffs in training son and daughter.