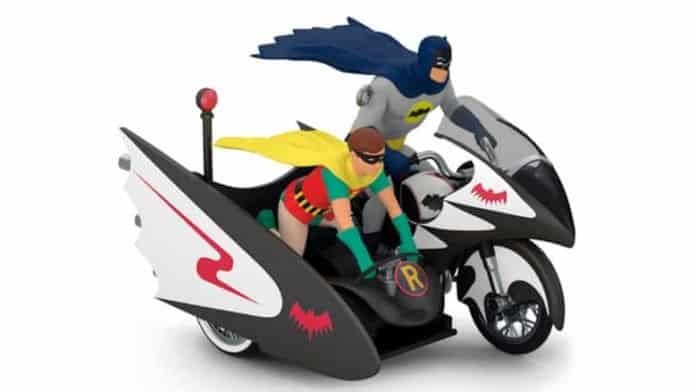 Whether you go artificial or real (you got to go real), everyone that celebrates Christmas needs ornaments for their tree. And there’s perhaps no better way to show off your classic nerd status than with this Batman Batcycle Christmas ornament.

The Batman Batcycle Christmas ornament comes to us from our friends at ThinkGeek with the design itself originating from Hallmark. Hallmark opted to go with the iconic Adam West rendition of the character. It comes complete with Burt Ward’s take on Robin in his sidecar and features wheels that turn for authenticity. Just don’t let your 2 year old get a hold of it (I speak from experience).

ThinkGeek and Hallmark’s Batman Batcycle Christmas ornament is officially licensed from the classic Batman TV series. The series ran on ABC for 3 seasons across 120 episodes from January 1966 through March 1968.

The design of the Batman Batcycle Christmas ornament is quite gorgeous. Crafted by Orville Wilson, the ornament sports a matte finish that really boosts the contrast in the designs of West’s Batman and Ward’s Robin. The characters’ respective capes are also ruffled and positioned horizontally, making the dynamic duo look as though their flying through the streets of Gotham chasing down any of their iconic adversaries. But unlike the vehicle that this awesome ornament is inspired by, this miniaturized version doesn’t come equipped with all of Batman’s cool gadgets.

ThinkGeek has the Batman Batcycle Christmas ornament currently listed for $29.99 before shipping and taxes are calculated. It’s available now so getting it well before you decorate for Christmas definitely won’t be a problem.

If you’re a Batman fan and are seeking out some new Christmas décor to prove it, you can’t go wrong with the classic versions of Batman and Robin on your tree. And then in 2019 you can use your same Bat-ornament, same time of year.