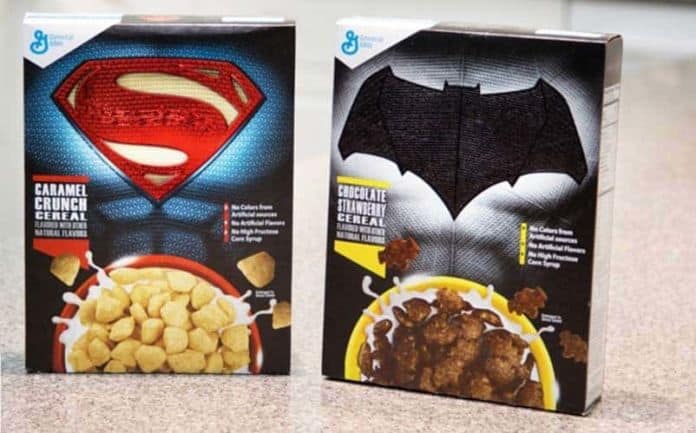 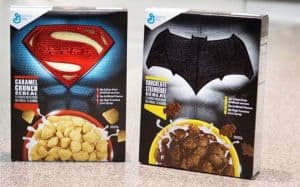 There will be two new cereals hitting store shelves across the U.S. (and in Canada for a limited time), one named Superman Caramel Crunch and the other named Batman Chocolate Strawberry. The new Superman cereal pieces will be shaped like the Superman shield, with the Batman pieces being shaped like the Batman emblem (the one seen in Batman v Superman, of course). We’ll also note that the shapes are VERY, well, “loose” in formation for lack of a better term (meaning they hardly look like what they’re supposed to).

“Superman and Batman continue to appeal to the generations of fans that have enjoyed them for decades, as well as new Super Hero fans experiencing them for the first time,” says Alan Cunningham, senior marketing manager at General Mills. “So it doesn’t get much more exciting for us than having the opportunity to feature these iconic characters on their two new cereals.”

The brand new Batman v Superman cereals will officially make their debut at Wizard World Comic Con in New Orleans (January 8-10), and then they’ll be rolled out to grocery stores nationwide.

Meanwhile, Batman v Superman: Dawn of Justice will be released in theaters on March 25, 2016, and it’s one of our most anticipated movies of 2016.

The Flash to Appear in Batman v Superman