We have a new contender entering the battle royale mix. Battlerite Royale has been announced this morning. It’s top-down MOBA perspective and style gives it a unique twist on the current battle royale landscape. 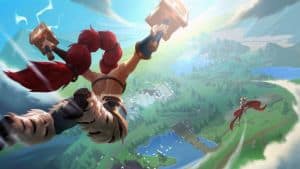 Battlerite is a combination of action MOBA gameplay in an arena brawler environment. Battlerite Royale is going to take that formula and combine it will the elements that have made the battle royale genre such a phenomenon these days.

The developers at Stunlock plan to utilize a map that is 30 times larger than what is standard in Battlerite matches. Known for their “spectacular fantasy landscapes”, Battlerite Royale will throw 20 players onto these maps for a “Free for All” match in which only one can come out alive. Both Solo and Duos modes will be supported.

“With a top-down Battle Royale mode we’ve set out to bring the ultimate survival experience to Action RPG and MOBA players. We want to give players the excitement of a Diablo-esque exploration experience combined with the character variation of a MOBA and the thrill of a survival game. That said, I think anyone who’s looking for a fresh and different take on the Battle Royale genre will have a blast.”

Battlerite Royale matches will last 10 minutes and include 27 unique Champions to duke it out with. Stunlock says that “Every champion plays differently and mastering their abilities is the key to survive on the island, which makes Battlerite Royale stand out from similar titles.”

Battlerite is a free-to-play title for PC. Downloading the free version grants access to 6 unique champions each week on a revolving rotation. Players can unlock characters permanently via in-game currency or in-app purchases.

To quickly unlock all 27 Champions currently available, and those coming in the future, players can drop a one-time payment of $29.99. There’s no word yet when Battlerite Royale is planned to launch. For more on the current slate of upcoming battle royale games, checkout Nerd Much’s complete list.

Previous articlePUBG Desert Knights Begins Today
Next articleSOS Battle Royale Has Arrived
Jeff Scott
Growing up a 90's kid, Jeff found his love for gaming during Nintendo's heyday. Because of that, you could (perhaps sadly) call him a "Nintendo Fanboy" to this day.