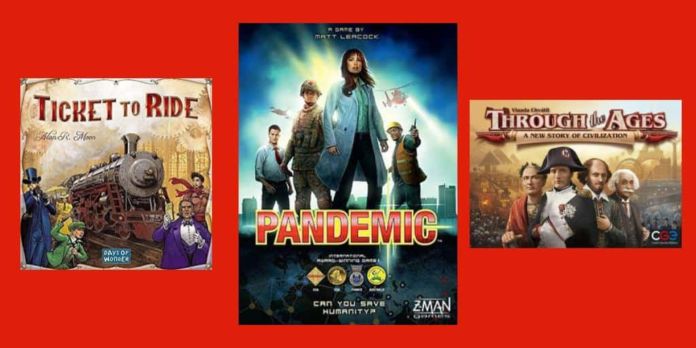 Sometimes it’s nice to play a board game without all of the shuffling and bits and pieces—and sometimes you just can’t convince your friends to play your favorite game.

Mobile board game apps fix both of these problems, and it’s rare that an app can’t simulate the real thing. But some digital versions of board games capture the feel better than others.

The interface and intuitiveness are key—if the screen is filled with text and buttons or the game lacks smooth controls, it can be frustrating rather than relaxing. It’s also frustrating when the artwork of an app doesn’t match the original artwork (unless it’s a much-needed upgrade).

Competitive and versatile artificial intelligence (AI) is also a must. If the AI is predictable and doesn’t present a challenge, you’re left playing solitaire for a high score. And of course, pass-and-play and online multiplayer are great features to have.

Board game apps have been a surprising evolution of a thriving hobby that is so centered on getting away from devices and gathering around a table. With most popular games, it’s inevitable that a digital adaptation will follow.

Here are the best mobile board game apps: 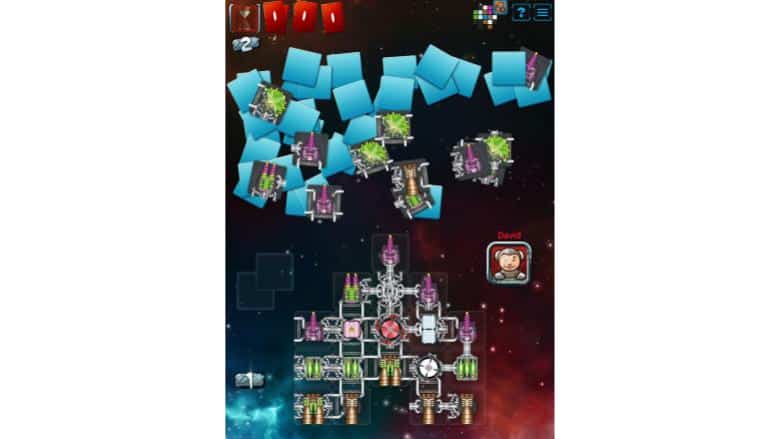 For a game that is so tactile and requires you to read a lot of info from your board at once, this is a remarkably clever and faithful adaptation that eliminates the fiddliness and upkeep of the original.

Vlaada Chvátil’s Galaxy Trucker is a real-time game of building spaceships out of plumbing materials. Each player is building the best ship they can for a perilous journey, adding as many guns, engines, and cargo holds as they can. It’s stressful and chaotic, and there’s a decent chance your ship won’t make it, but that’s the fun of it.

Developed by Czech Games Edition (the same company that published the board game) the app has a satisfying campaign mode, simple pass-and-play, and online multiplayer. It’s a blast to play against the computers in the campaign mode and is a good way to hone and practice your skills in the original game. 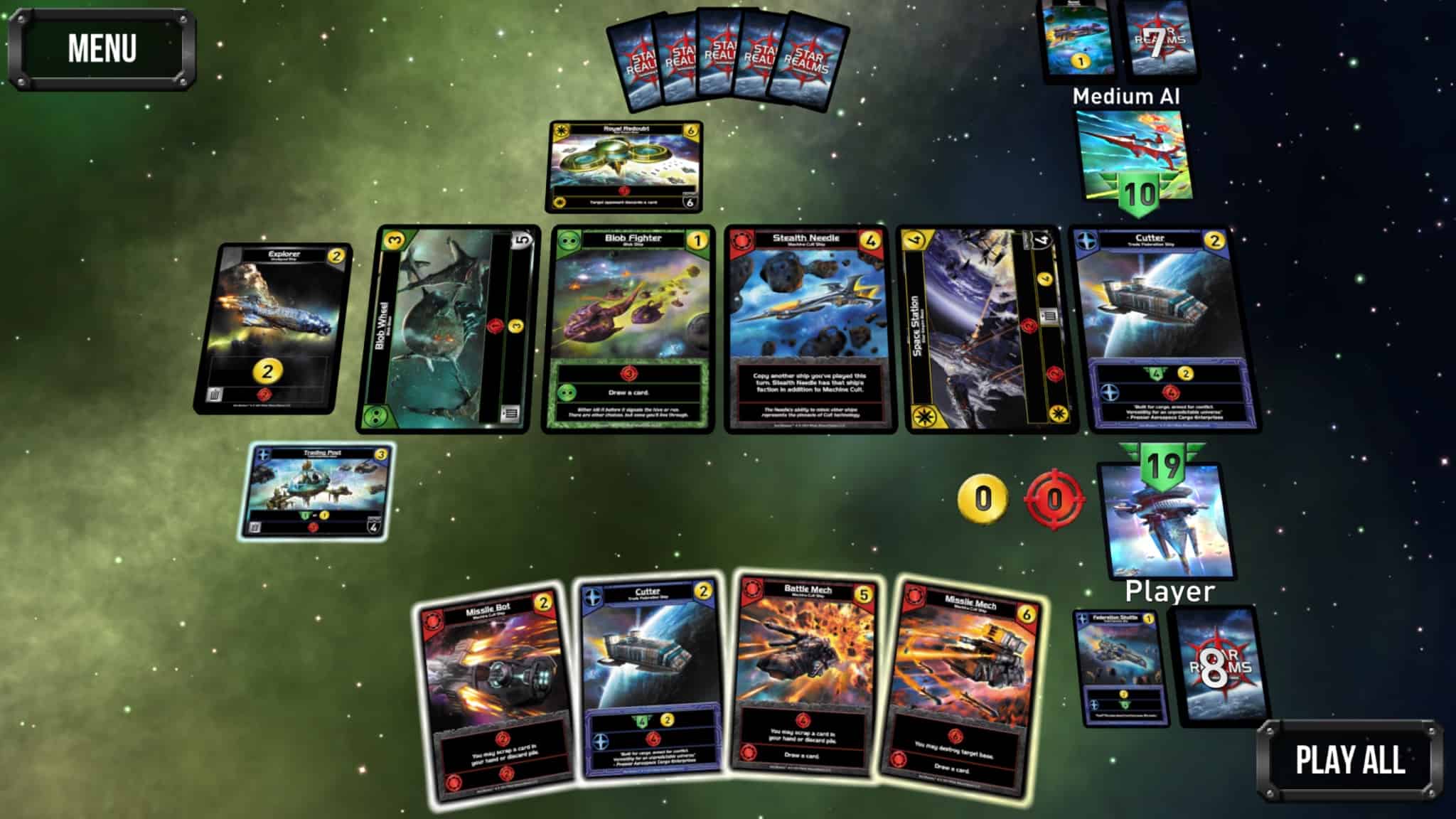 Star Realms, designed by Robert Dougherty and Darwin Kastle, is a space combat deckbuilding game where players purchase ships from different factions and launch assaults on their opponents.

The card game retails for $15, so it’s fitting that you can play against the easy AI for free. As far as interfaces go, this is one of the best. If you’re familiar with the card game, you can skip the tutorial and you’ll already know how to play with its straightforward controls. The multiplayer mode is well worth the cost, especially if you have friends to play against.

Developed by the game’s publisher, White Wizard Games, Star Realms stands out as a stellar free digital board game with a lot to offer.  There’s something about tapping your opponent’s hit points to trigger a screen-shaking explosion that make this app extremely satisfying.

The Castles of Mad King Ludwig 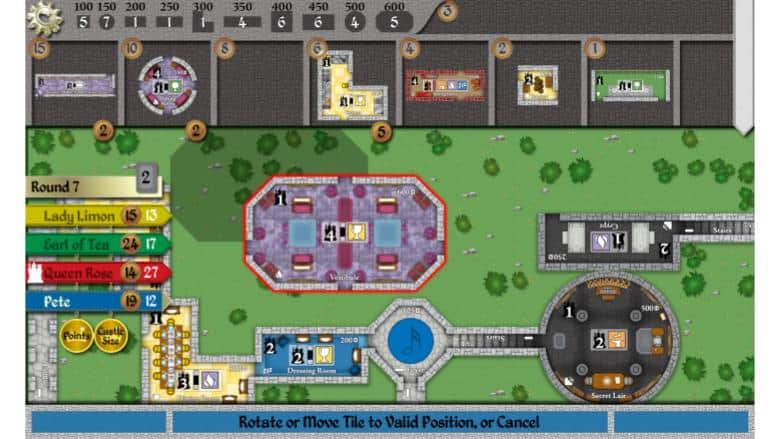 Setup and gameplay time are crunched down from an hour and a half to a decision-packed 20 minutes in this straightforward adaptation.

Ted Alspach’s The Castles of Mad King Ludwig is a spatial puzzle and economic game of competing architects designing a castle for a deranged king. One player sets the prices for available rooms, then the other players purchase the rooms and add them to their castles.

The board game has quite a lot of setup with 75 differently-shaped room tiles that need shuffling. The digital version, developed by the publisher, Bezier Games, has a functional interface that makes gameplay a breeze. Pricing rooms is easy, as you can click on an opponent’s name to view their castle and simply drag the rooms to the desired prices. The campaign offers some minor twists on the original rules that keep things fresh and offer potential variants to try in the analog version. Unfortunately, the game lacks online multiplayer, but the AI is serviceable and two- to four-player pass-and-play works well. 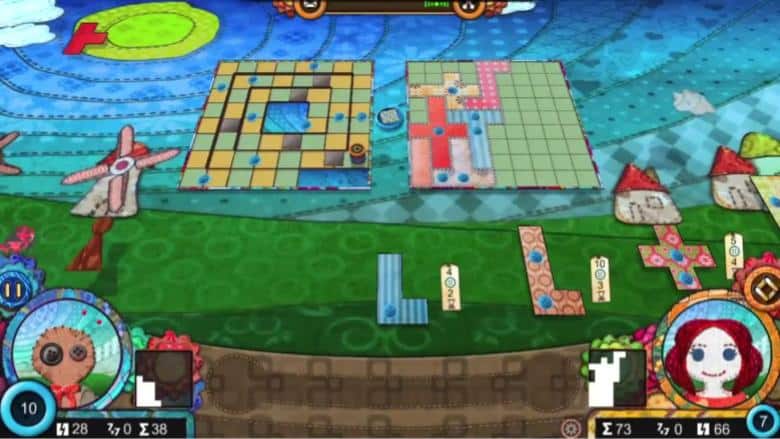 It’s no wonder that a Tetris-esque, tile-laying puzzle game translates well to the screen.

Patchwork, designed by board game superstar Uwe Rosenberg, pits two players against each other as they vie for the best pieces of fabric for their quilt. The game features an interesting time track mechanic that makes time a major currency and means that you sometimes get several turns in a row. It’s one of the best two player games out there (which is why it made our list of the best two-player board games for couples), and its app version shines.

Though the look differs slightly from the physical game, it’s fairly close, and the controls are simple and intuitive. The AI presents a formidable challenge, and the inclusion of both pass-and-play and online multiplayer make leaves little to be desired.

Published by Asmodee Digital, the Patchwork digital adaptation works so well it’s a wonder it wasn’t an app first. 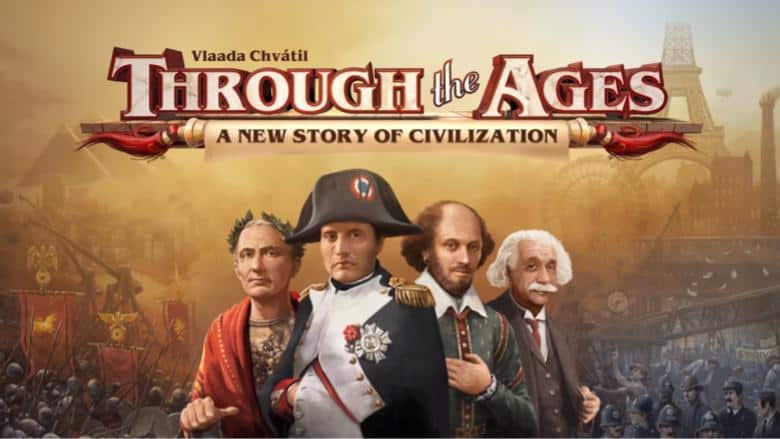 The classic civilization game by Vlaada Chvátil sheds its physical form of hundreds of cards and wooden bits to take on an easy-to-use digital form.

Through the Ages is a deep, strategic, and involved game of cultivating civilizations filled with monuments and historical figures. It’s a beast, taking from two to four hours to play, but that’s all a part of the experience. It has long held a position among the top ranked games on boardgamegeek.com—its two versions are both among the top 100 games.

The app, developed by the game’s publisher, Czech Games Edition, compresses hours into a much smaller window of time and eliminates the clutter and shuffling. Some games benefit from the pleasing tactility of their components; Through the Ages has never been one of them. Fans of the board game will appreciate this digital rendition, and newcomers will find the tutorial helpful and possibly a useful teaching tool for the physical game. The AI is fantastic, and the online and pass-and-play multiplayer modes make this a great game to play with friends. 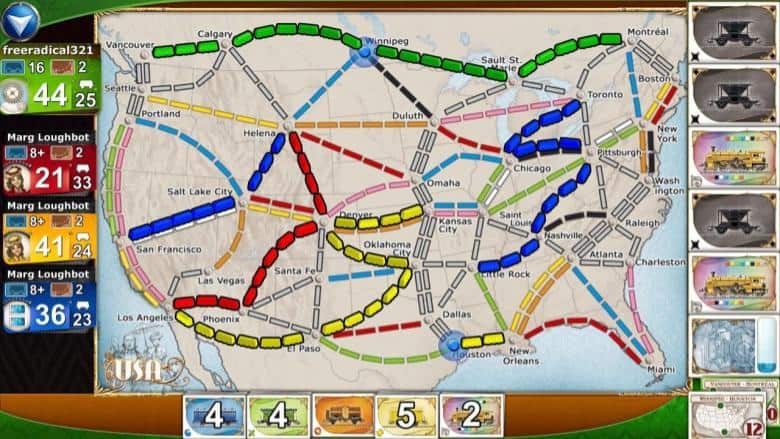 An already intuitive game of building train routes across continents makes for a sharp and snappy app that is a great time killer on planes or subways, especially if you have a friend to play with.

Ticket to Ride, the bestselling game by Alan Moon, sends players across America, linking routes of trains to connect cities. It’s one of the few modern board games to come close to the level of popularity of Monopoly—it may someday be as popular or more popular as a family game due to its simplicity and fast gameplay.

The digital version, developed by Asmodee Digital, takes an already simple game and makes it somehow more streamlined. Routes are conveniently highlighted, and laying trains is as easy as tapping on a route. The AI is lacking, but pass-and-play and online multiplayer offer hours of entertainment. The app comes with the original U.S.A. map, with other maps available to purchase as expansions.

Race for the Galaxy 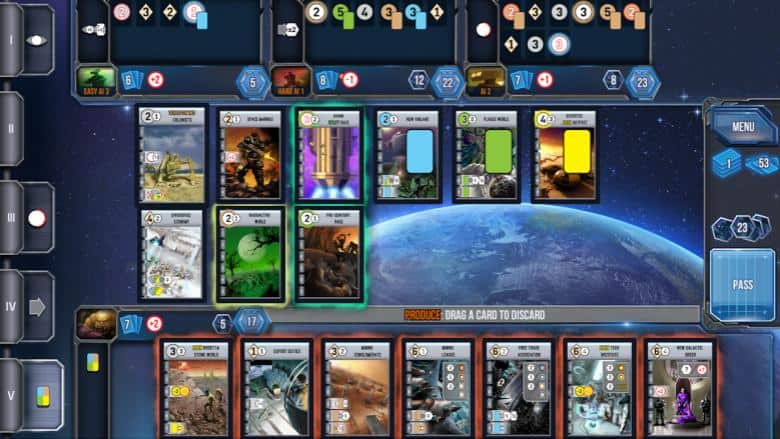 In Race for the Galaxy, designed by Tom Lehmann, players race to build the most successful space empires they can by settling planets and developing technologies. It’s heavily card-driven, and there are numerous expansions that make an already replayable game even more diverse.

The digital version, developed by Temple Gates Games, has great AI that makes it easy to play game after game, and the online multiplayer works well. All expansion are available to purchase, so your digital version can match your physical one—or, you can get a sense of each expansion for the low price of the digital version before you purchase the physical version. The lack of a pass-and-play mode is unfortunate, but the nature of Race for the Galaxy’s gameplay explains this missing feature. Overall, it’s one of the better digital board games out there. 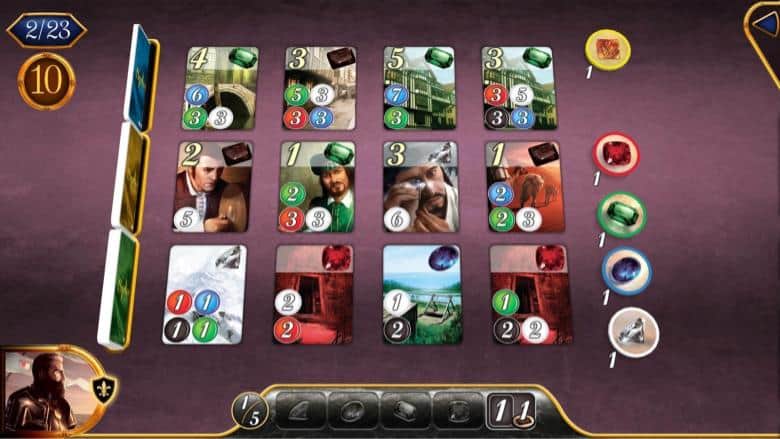 A lot of the fun of Splendor is in the heavy chips, but it makes for an attractive and feature-packed app.

Players take on the role of gem merchants in Splendor, designed by Marc André, by collecting gems and building an engine that will attract nobles for victory points. Its short gameplay, engaging strategies, and gorgeous artwork have made it one of the more popular games of the last five years.

Despite losing its charming components, Asmodee Digital’s Splendor still shines as an app and makes for a great little puzzle game. The “challenges” feature creates new ways to play that will hone your strategy even in the classic version of the game, and the optional cities expansion offers even more versatile gameplay. The AI is fairly easy, but the app does include pass-and-play as well as online multiplayer.

When Plague Inc. has you feeling a bit morbid, it might be a good idea to save humanity from deadly diseases for a change.

Matt Leacock’s classic cooperative game has arguably defined modern co-op board games. In Pandemic, players are a team of scientists, researchers, and specialists racing around the globe as several diseases threaten to wipe out humanity. It’s an intense, 45-minute adventure that always ends in disaster or narrow victory.

The board game hardly needs streamlining, but Asmodee Digital’s mobile app is a heck of a lot of fun. Though there’s no online multiplayer, pass-and-play is a blast, and the game’s cooperative style translates well to solo play as well. Whether or not you’ve played the original, Pandemic makes for a great strategy game you’ll want to play over and over.