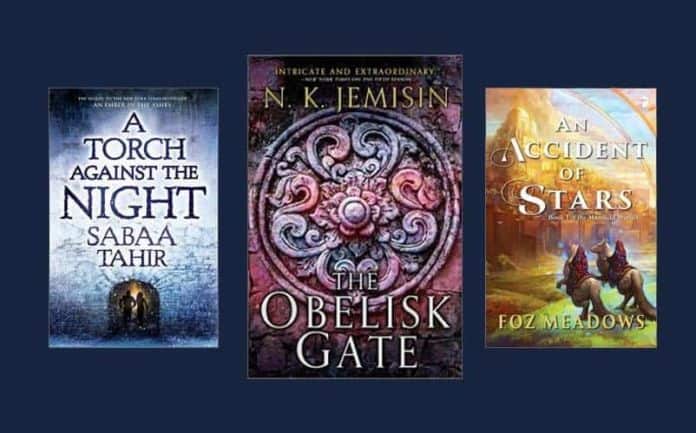 We’re back with our monthly edition of the best new releases in fantasy and science fiction books. If you’re an avid reader and you haven’t been following this column, you definitely should; in addition to our list of list of the most 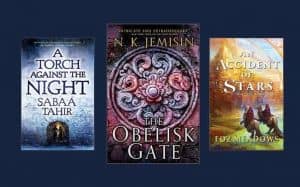 anticipated books overall for the entire year, we also break it down month-by-month and add smaller gems that may or may not have been included in the annual list; if not, it’s either because we didn’t know about them at the time or because they are lesser known, but not necessarily less worthy.

Having said that, here are the fantasy and sci-fi books coming out in August that we think you shoulder consider (sorry in advance about your to-read list). 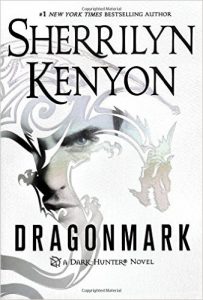 International and #1 New York Times bestselling author Sherrilyn Kenyon has something of a cult following, and her fans undoubtedly don’t need to be told that she has another book coming out. For those who don’t already follow her series, the progression can be a bit confusing, and the sheer number of books daunting. You’re certainly welcome (and even encouraged) to try, though, and the official book list can be found here; it’s not a reading order, exactly, but a quick search will reveal multiple unofficial ones circulating the web.

This newest installment, Dragonmark, focuses on her character Illarion, a dragon who was unwillingly made human and forced to serve as a dragonmount in the army. He was forcibly exiled to a fey realm and lost everything he held dear, but now he may have a chance to regain that if he is willing to pay the price. The question is, how far is he willing to go? Fans of the urban fantasy writer won’t want to miss this chance to delve deeper into Illarion’s past, as well as dragon folklore in general. 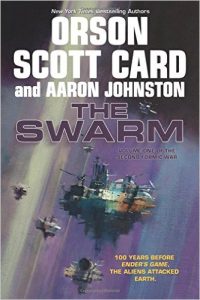 Bestselling author Orson Scott Card has been collaborating with Aaron Johnston on an Ender’s Game prequel series, and The Swarm is the first volume in a new trilogy about the Second Formic War. Ender’s Game and it’s side-by-side series Ender’s Shadow are arguably some of the best science fiction out there, so anything new in that universe is always exciting, and the First Formic War trilogy received largely positive reviews.

The Swarm takes place in the aftermath of the First Formic War, as Earth struggles to rebuild. After the massive damages that China suffered at the hands of the Formics, scientists determined that the offending ship was merely a scout ship and that the mothership is out there and headed for the solar system. Under the new Hegemon and Polemarch, the planet must now regroup and prepare to defend itself a second time, and also avoid being torn apart from within by ambition and politics.

3. The Hike: A Novel by Drew Magary 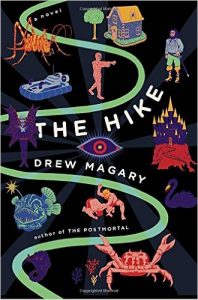 The Hike by Drew Magary (author of The Postmortal) is something of a modern day Alice in Wonderland with video game elements mixed in. Wired calls it “kind of a more cynical version of The Phantom Tollbooth mixed with a game of Dungeons & Dragons”. It’s perfect for readers seeking a lighter fantasy adventure that’s a little on the eccentric side.

This fantastically weird novel is about a man named Ben who, on a business trip in Pennsylvania, takes a walk in the woods behind his hotel one afternoon. In doing so, he finds himself on an epic quest fraught with bizarre creatures and magical objects. He must track down the one known as the “Producer” – the one responsible for creating the world and the only one who can free him from the path.

4. An Accident of Stars (The Manifold Worlds #1) by Foz Meadows 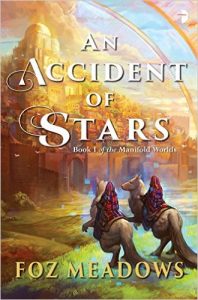 Everything about An Accident of Stars intrigues us, from the cover to the description to the author. Foz Meadows is a genderqueer author and blogger from Brisbane with several fantasy novels under her belt, and this is the first of a new series called The Manifold Worlds. The main characters seem to be almost entirely female, which is amazing and rare for a high fantasy novel, and it takes place in a world made up of matriarchal societies. In fact, all the traditional societal roles are completely gender-swapped.

Saffron Coulter unwittingly travels through a hole in reality to the magical realm of Kena. There, she forms a bond with three rebel women who are pursued by a dangerous ruler. They flee to the matriarchy of Veksh, ruled by the Council of Queens, and as Saffron finds her fate more and more deeply intertwined with the fate of her companions, it becomes clear that the fate of this world may rest on the shoulders of this accidental worldwalker.

5. The Last Days of New Paris by China Miéville 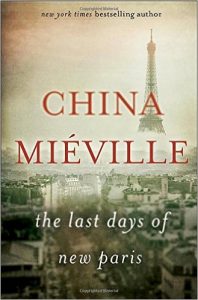 China Miéville is part of a loose coalition of authors sometimes referred to as “New Weird” and refers to his own work as “weird fiction”, and that is about all you need to know about him. The Last Days of New Paris is set in an alternate universe in WW2-era Paris, where a surrealist bomb is detonated following the city’s fall to the Germans. The book itself is written in an almost surrealist fashion, which is typical of Miéville – it is bizarre, chaotic, and wonderfully imaginative.

Fast forward nine years and the story follows a Surrealist fighter named Thibaut in Paris, where the Nazis and the Resistance are in constant conflict. To escape the city, he teams up with an American photographer named Sam and a figure known as “the exquisite corpse”. If you’re a fan of structured, cut-and-dried stories, this is probably not the book for you; however, if offbeat, borderline esoteric reads that stretch the limit of your imagination appeal to you, then you should definitely check out Miéville’s work. His writing is beautifully haunting, vivid, and utterly unique.

6. The Guns of Empire (The Shadow Campaigns #4) by Django Wexler 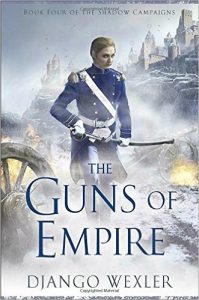 The Guns of Empire is the fourth installment in Django Wexler’s highly rated military fantasy series The Shadow Campaigns, which is a must-read for fans of George R.R. Martin. The series is set in an alternate 19th-century universe, in a place known as Vordan, and follows the characters Marcus d’Ivoire and Winter Ihernglass. Like A Song of Ice and Fire, it is high fantasy with a strong military and political focus and just a touch of magic. The constant action and political intrigue, in addition to the well-developed and dynamic characters, makes this series highly captivating.

Marcus and Winter find themselves caught between a rock and a hard place when Queen Raesinia hopes to negotiate an end to the war with the Sworn Church of Elysium, and general Janus bet Vhalnic does not believe this to be possible. How can they choose between their queen and general, and what will be the consequences for each choice? Meanwhile, in the heart of fortress-city Elysium, a mysterious dark entity is rising which threatens them all, and defeating it will require terrible sacrifices.

7. The Obelisk Gate (The Broken Earth Book 2) by N.K. Jemisin 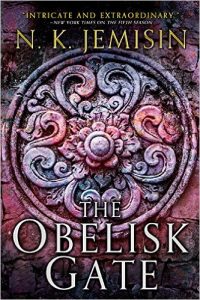 The Obelisk Gate is the sequel to N.K. Jemisin’s multi-award nominated The Fifth Season and the second book in The Broken Earth series. The series is set on a world ironically named the Stillness, which is wracked with natural disasters and covered in ash due to relentless seismic activity. This leads to frequent near-apocalyptic events known as Fifth Seasons (hence the title of the first book).

The official blurb is fairly enigmatic, but we’ve been able to glean this: a powerful orogene woman known as Essun is searching for her daughter Nassun, who was kidnapped by her father in the hopes that he can cleanse her of this power. However, Essun’s mentor, Alabaster, is dying and he wishes Essun to use her powers to end the current fifth season. Essun is faced with impossible choices in a sequel that promises to be every bit as enchanting as the first, and which develops Nassun into a character as wonderfully complex as her mother.

8. A Torch Against the Night (An Ember in the Ashes) by Sabaa Tahir 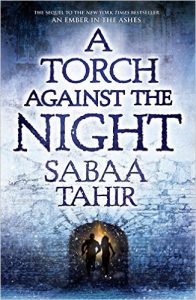 A Torch Against the Night is the highly-anticipated sequel to the New York Times bestselling novel An Ember in the Ashes by Sabaa Tahir. An Ember in the Ashes was Tahir’s debut novel and met with overwhelming praise when it released last year, and its follow-up looks to be equally stunning. It may be classified as YA fantasy, but that doesn’t mean that older adult readers should dismiss it; it’s undeniably one of those series that can be enjoyed by readers of all ages.

In A Torch Against the Night, Laia and Elias set out on a dangerous mission to rescue Laia’s brother from the horrific Kauf Prison, because he holds knowledge that may be the key to their future. However, in order to survive they must outsmart the enemies that pursue them: Emperor Marcus, the Commandant, and the Warden of Kauf. They are also hunted by Helene, Elias’s ex-friend and now the Empire’s Blood Shrike, who is on a mission to kill them in order to prove her loyalty to the Empire.