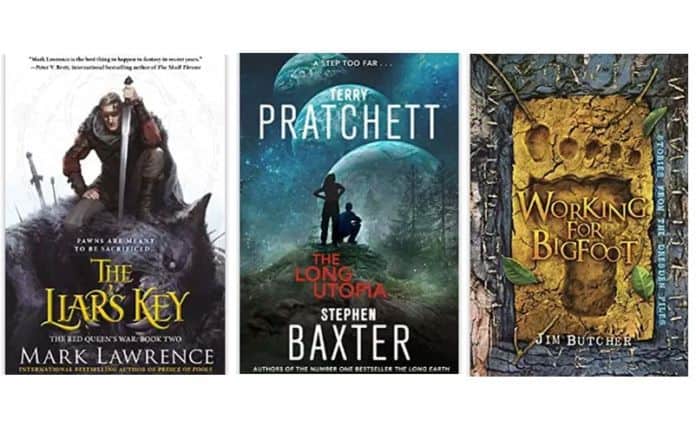 The month of June will see multiple new installments in already well-known sci-fi and fantasy book series by some highly acclaimed authors. Featured as well are a few one-shots and a couple works by up-and-coming authors that are relatively new to the fantasy and sci-fi scene — but that you should definitely consider reading.

So, without further adieu, we present the 10 best new sci-fi and fantasy books to read in June 2015:

1. ‘The Darkling Child: The Defenders of Shannara’ by Terry Brooks 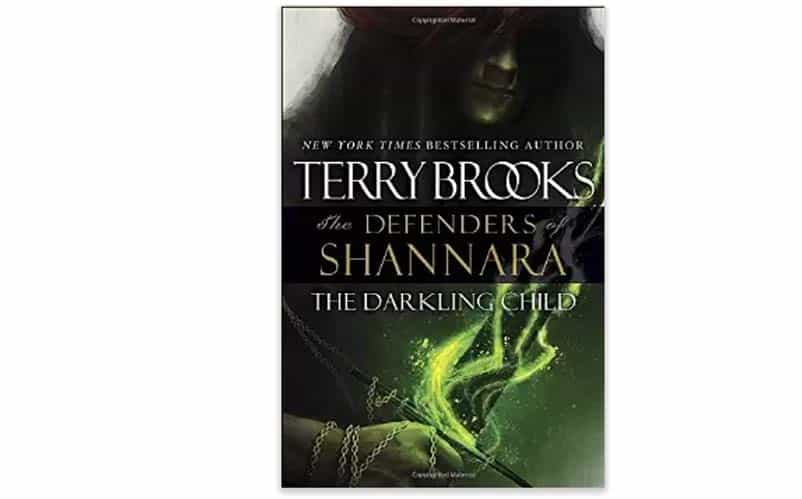 “After taking up his enchanted sword against the dark sorcerer Arcannen, Paxon Leah has become the sworn protector of the Druid order. Now a critical hour is at hand, as a beloved High Druid nears the end of her reign and prepares to pass from the mortal world to the one beyond….For in a distant corner of the Four Lands, the magic of the wishsong has been detected. Paxon must accompany a Druid emissary to find its source—and ensure the formidable power is not wielded by the wrong hands.”

If you’re unfamiliar with the works of Terry Brooks, this is the perfect opportunity to delve into the famous Shannara series. The second installment in the loosely-connected Defenders of Shannara trilogy, The Darkling Child is intended as a standalone novel. So if you haven’t yet read this 23-time New York Times bestselling author, we strongly recommend you do so now.

Buy ‘The Darkling Child: The Defenders of Shannara’ here.

2. ‘From a High Tower (Elemental Masters Book 11)’ by Mercedes Lackey 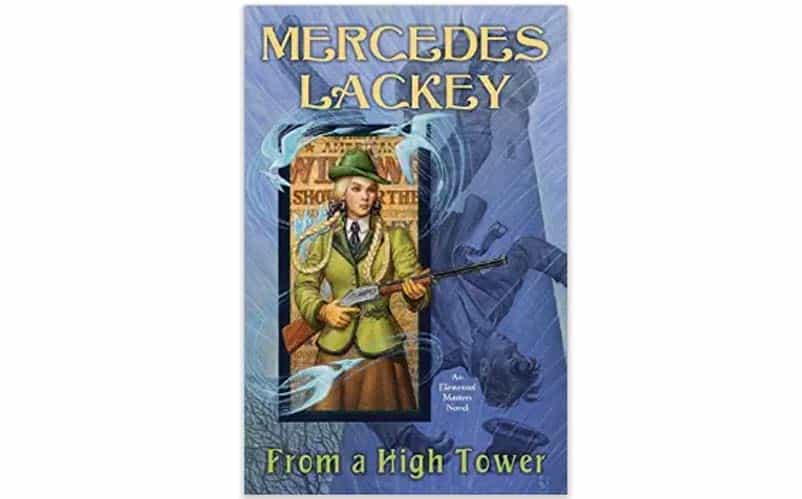 “From a High Tower is newest adventure in Mercedes Lackey’s Elemental Masters series, featuring a retelling of Rapunzel’s not-so-happily-ever-after ending.”

Another author that you should consider picking up if you haven’t already is Mercedes Lackey, who is coming out with the 11th installment of her Elemental Masters series. Each book in this series is loosely based on a fairy tale, with this one based on the story of Rapunzel. The series takes place on an alternate Earth where Elemental Masters have control over the four main elements – earth, water, air, and fire – as well as elementals. From a High Tower is sure to be another great installment in the series.

Buy ‘From a High Tower’ here. 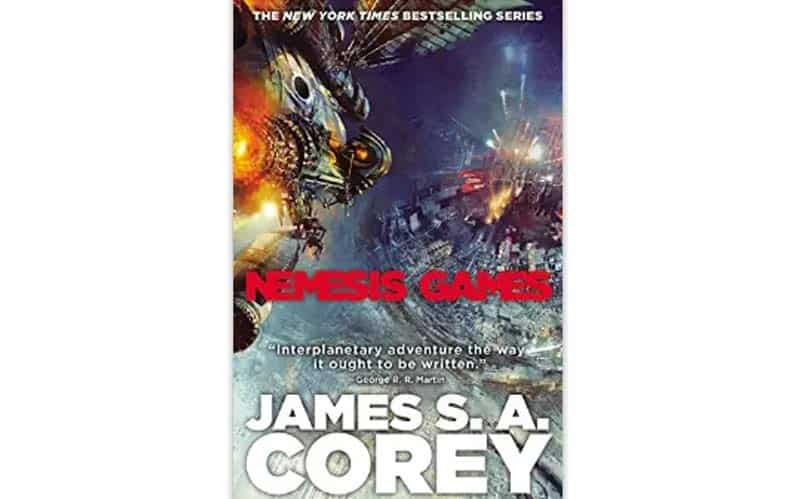 “Ships are disappearing without a trace. Private armies are being secretly formed. The sole remaining protomolecule sample is stolen. Terrorist attacks previously considered impossible bring the inner planets to their knees….James Holden and the crew of the Rocinante must struggle to survive and get back to the only home they have left.”

This is the 5th book in the New York Times bestselling series The Expanse from the duo of Daniel Abraham and Ty Franck (under the pen name James S.A. Corey). There is currently a television series in production set to air sometime in 2015 on Syfy. The first book of the series, Leviathan Wakes, was nominated for the 2012 Hugo Award for Best Novel and the 2012 Locus Award for Best Science Fiction Novel – so you should definitely bring yourself up to speed on this series before the TV show premieres, and check out Nemesis Games as well. 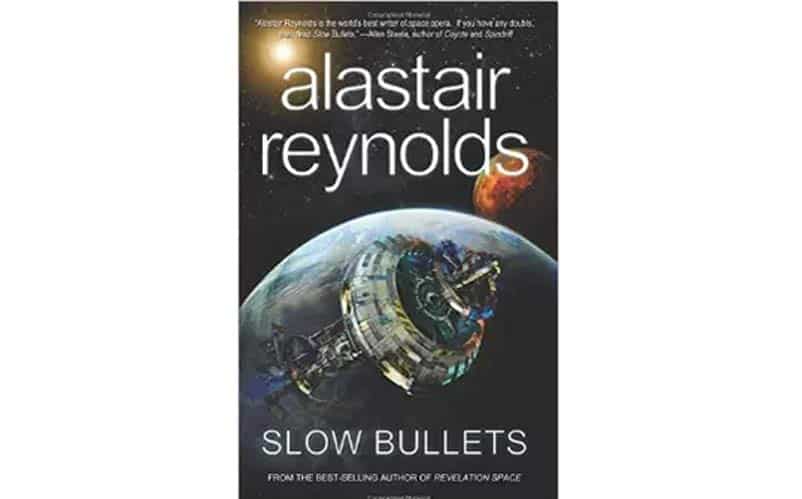 “A conscripted soldier is beginning to consider her life after the war and the family she has left behind….On the brink of the ceasefire, Scur is captured by a renegade war criminal, and left for dead in the ruins of a bunker. She revives aboard a prisoner transport vessel. Something has gone terribly wrong with the ship. Passengers…are waking up from hibernation far too soon. Their memories…are the only links to a world which is no longer recognizable. And Scur will be reacquainted with her old enemy, but with much higher stakes than just her own life. “

Alastair Reynolds is an astrophysicist-turned-author who is hardly new to the science fiction scene (having written the Revelation Space series). We are sure that this novella, titled Slow Bullets, won’t disappoint. And, we can always get behind a female protagonist, which is not altogether common in sci-fi. 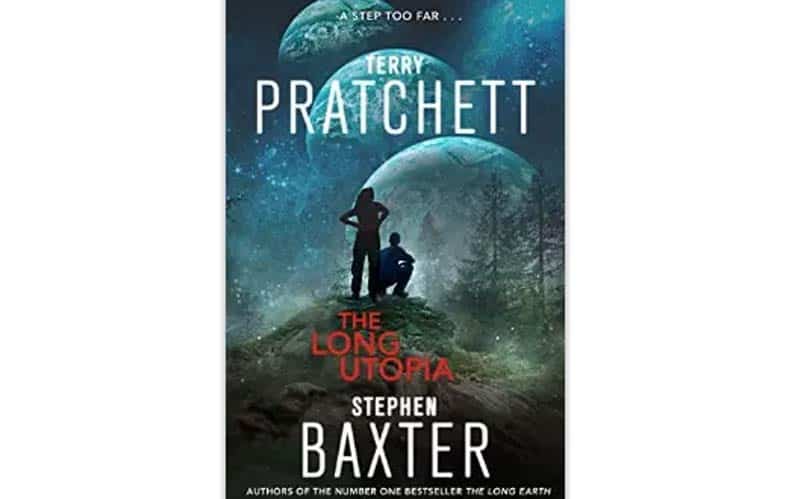 “Human society continues to evolve on Datum Earth, its battered and weary origin planet, as the spread of humanity progresses throughout the many Earths beyond. Lobsang, now an elderly and complex AI, suffers a breakdown, and disguised as a human attempts to live a “normal” life on one of the millions of Long Earth worlds. His old friend, Joshua, now in his fifties, searches for his father and discovers a heretofore unknown family history. And the super-intelligent post-humans known as “the Next” continue to adapt to life among “lesser” humans.”

A collaboration between these two highly-acclaimed science fiction authors can only mean good things for readers. The timing of this sci-fi book release serves as a poignant reminder of the recent passing of Sir Terry Pratchett — so if you needed another reason to pick up The Long Utopia, do so in his memory. It is the fourth installment in the internationally bestselling series, with a projected total of five. 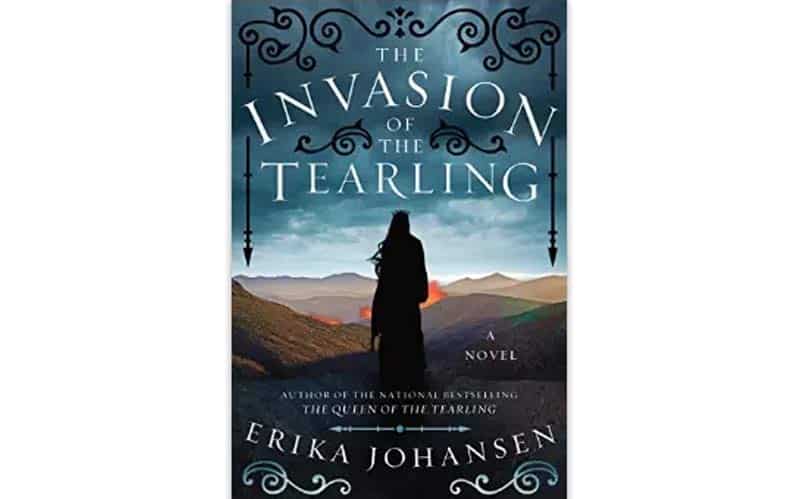 “Kelsea Glynn is growing into her new responsibilities as Queen of the Tearling. By stopping the shipments of slaves to the neighboring kingdom of Mortmesne, she crossed the Red Queen, a brutal ruler whose power derives from dark magic, who is sending her fearsome army into the Tearling to take what is hers….But as the Mort army draws ever closer, Kelsea develops a mysterious connection to a time before the Crossing, and she finds herself relying on a strange and possibly dangerous ally: a woman named Lily, fighting for her life in a world where being female can feel like a crime.”

The sequel to the national bestseller The Queen of the Tearling (and the second book in a projected trilogy), titled Invasion of the Tearling, promises to be equally enthralling. The heroine has been compared to Katniss Everdeen, and Emma Watson is set to produce and star in the movie after becoming obsessed with the books. And if that doesn’t make you want to run out and buy the first book, I don’t know what will.

Buy ‘The Invasion of the Tearling’ here.

7. ‘Book of Numbers: A Novel’ by Joshua Cohen 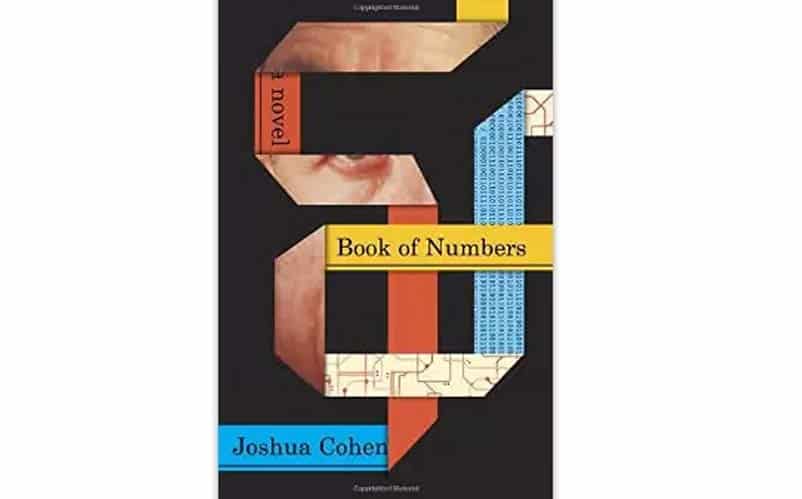 “The enigmatic billionaire founder of Tetration, the world’s most powerful tech company, hires a failed novelist, Josh Cohen, to ghostwrite his memoirs. The mogul, known as Principal, brings Josh behind the digital veil, tracing the rise of Tetration, which started in the earliest days of the Internet by revolutionizing the search engine before venturing into smartphones, computers, and the surveillance of American citizens. Principal takes Josh on a mind-bending world tour…initiating him into the secret pretext of the autobiography project and the life-or-death stakes that surround its publication.”

Initial reviews of the upcoming sci-fi novel Book of Numbers lead us to believe it may have a somewhat narcissistic tone (if the narrator having the same name as the author didn’t give that away) as well as misogynistic and condescending. If you’re not the type to be affronted by these things, you might consider giving this book a try. The subject matter seems interesting and unique, but perhaps the writing style and humor are tailored to a very specific audience. 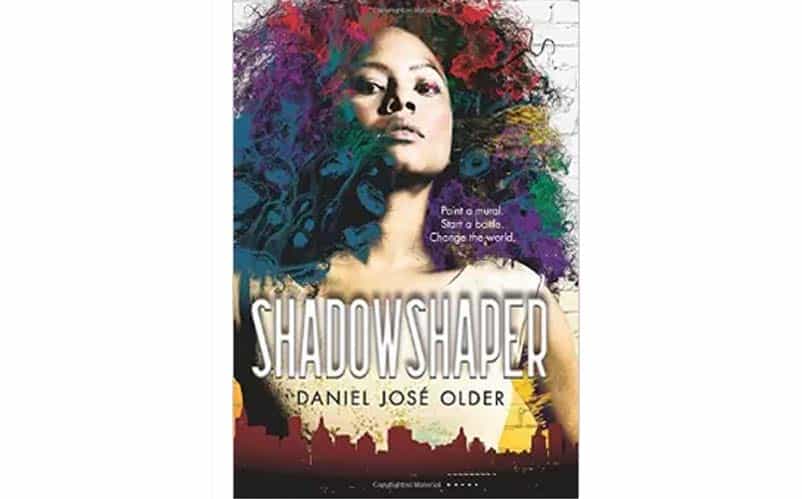 “Sierra Santiago planned an easy summer of  making art and hanging out with her friends. But then a corpse crashes the first party of the season. Her stroke-ridden grandfather starts apologizing over and over. And when the murals in her neighborhood begin to weep real tears….With the help of a fellow artist named Robbie, Sierra discovers shadowshaping, a thrilling magic that infuses ancestral spirits into paintings, music, and stories. But someone is killing the shadowshapers one by one — and the killer believes Sierra is hiding their greatest secret. Now she must unravel her family’s past, take down the killer in the present, and save the future of shadowshaping for generations to come.”

While Daniel Jose Older is new to the fantasy book scene, he has been hailed by Publishers Weekly as “a rising star of the genre”. Shadowshaper is an urban fantasy set in Brooklyn that is classified as a Young Adult novel but definitely seems worth a read no matter what your age (we’re all young at heart, aren’t we?). We love the originality, the artistic notes, and the fact that it features a Latina heroine. 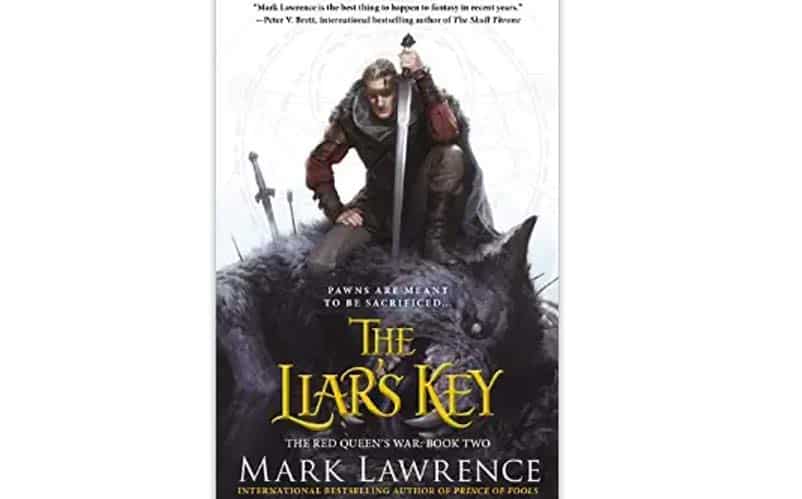 “After harrowing adventure and near-death, Prince Jalan Kendeth and the Viking Snorri ver Snagason find themselves in possession of Loki’s Key, an artefact capable of opening any door, and sought by the most dangerous beings in the Broken Empire—including The Dead King. Jal wants only to return home…but Snorri has his own purpose for the key: to find the very door into death, throw it wide, and bring his family back into the land of the living. And as Snorri prepares for his quest…Jal’s grandmother, the Red Queen continues to manipulate kings and pawns towards an endgame of her own design…”

The critically acclaimed author of The Broken Empire trilogy returns with his second installment of The Red Queen’s War series titled The Liar’s Key. This book is already receiving rave reviews on Goodreads, with a whopping 4.7/5 stars. So if you haven’t read the first book yet (which also seems to receive overwhelmingly positive reviews), we highly recommend you do so immediately — because this one promises to be epic. The conclusion to the projected trilogy is due for publication sometime in 2016.

10. ‘Working for Bigfoot’ by Jim Butcher 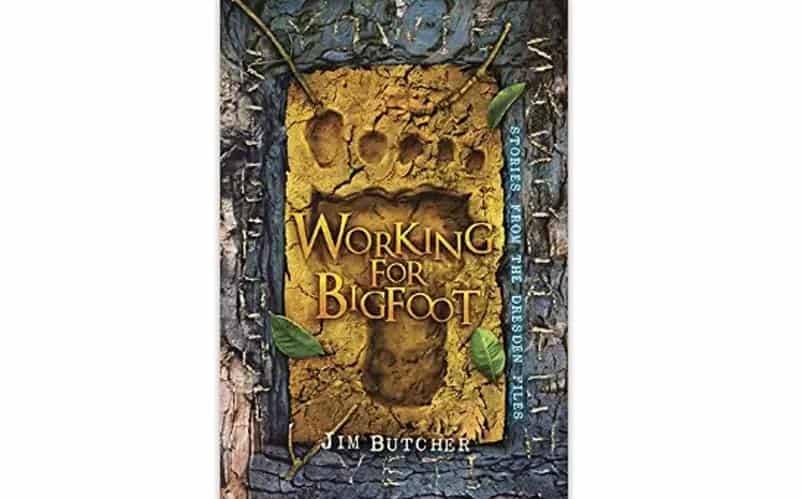 “Chicago wizard-for-hire Harry Dresden is used to mysterious clients with long hair and legs up to here. But when it turns out the long hair covers every square inch of his latest client’s body, and the legs contribute to a nine-foot height, even the redoubtable detective realizes he’s treading new ground. Strength of a River in His Shoulders is one of the legendary forest people, a Bigfoot, and he has a problem that only Harry can solve. His son Irwin is a scion, the child of a supernatural creature and a human…the extraordinary strength of his magical aura has a way of attracting trouble.”

This is a collection of three novellas from the Dresden Files by New York Times bestselling author Jim Butcher. It’s a quick read, and definitely worth picking up if you’re already a fan of the Dresden Files series (if not, you probably should be). Working for Bigfoot is a short compilation that promises to be whimsical, adventurous, and magical.

Nerd Much LLC is a participant in the Amazon Services LLC Associates Program, an affiliate advertising program designed to provide a means for sites to earn advertising fees by linking to Amazon. Our product recommendations are guided solely by our editors. We have no relationship with manufacturers.