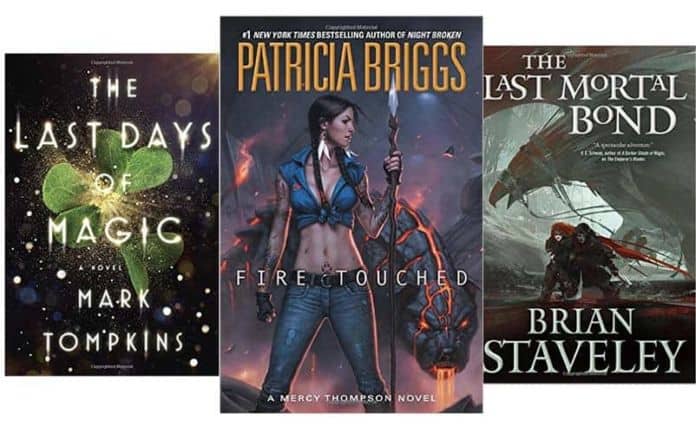 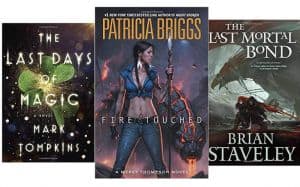 With February’s end fast approaching, it’s that time again for us to look ahead to the next month and decide which books we are most eager to read. As always, if you’re looking for new fantasy and science fiction books to add to your bookshelf or to-read list, we’ve got you covered.

Read on for our list of the eight must-read fantasy & sci fi books being released in the month of March 2016: 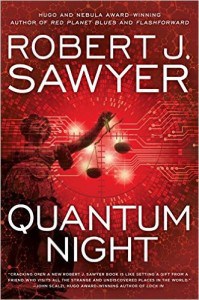 Quantum Night is a new standalone science fiction novel from Hugo and Nebula Award-winning author Robert J. Sawyer. This thought-provoking psychological thriller explores the dark recesses of the human mind, tackling concepts such as ethics, morality, consciousness, and human nature. It follows experimental psychologist Jim Marchuk, who has developed a tool for identifying psychopaths; then, while being questioned about his invention in court, discovers a six-year gap in his memory from twenty years prior. He then reconnects with his forgotten quantum physicist ex-girlfriend, and together the two discover a startling truth that has the power to shake the foundation of society. The concepts are well-researched, yet accessible, although some elements border on the ridiculous (it is science fiction, after all). If you’re looking for a fast-paced, thought-provoking read, look no further.

2. The Last Days of Magic by Mark Tompkins 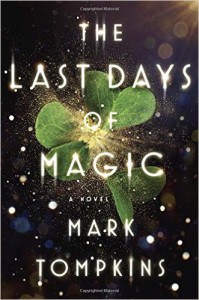 Celtic myth meets biblical lore meets fairy tale in The Last Days of Magic, the debut novel from fantasy writer Mark Tompkins. This alternate history takes readers back to a time when magic still existed, as did magical beings. Humans and Sidhe (also known as Nephilim) are ruled by twins Aisling and Anya, who are two of three parts of a Goddess responsible for keeping peace between the races and is periodically reborn among them. They are also tasked with protecting their charges from the Vatican, who is intent on wiping magical beings from the face of the Earth. Captivating, complex, and well-researched, this book brings Irish folklore to life and puts a fantastical spin on actual historical events; these elements combine to create a solid debut novel that you won’t want to miss. 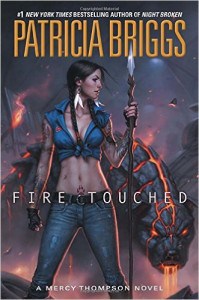 Fire Touched is the ninth installment in the highly popular urban fantasy series Mercy Thompson, Mercy (short for Mercedes) is what’s known as a walker; this means that she can transform into a coyote at will, owing to her Native American heritage. She is also a mechanic from the Tri-Cities area of Washington, surrounded by supernatural beings such as werewolves, vampires, and the fae. In this book, Mercy and her mate, Adam, take on a rampaging troll and come across a human child that had been stolen by the Fae. Fans of paranormal romance should definitely check this series out; start with the first book, Moon Touched, though, because you might be lost if you jump in now. Plot-driven and action-packed, Fire Touched has the power to evoke both laughter and tears.

4. Marked in Flesh: A Novel of the Others by Anne Bishop 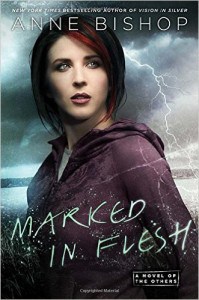 Another highly popular author of urban fantasy/paranormal romance is Anne Bishop, whose fourth The Others novel, Marked in Flesh, also releases this month. Although at times this genre seems to over-saturate the market, there are several authors that do it well, and Anne Bishop is one such author. It’s recommended that newcomers to the series start with the first book, Written in Red. Meg Corbyn, the main character, is what’s known as a cassandra sangue, or blood prophet. Her kind becomes allied with the Others (the collective name for all the supernatural beings), and in Marked in Flesh, face a series of attacks from radical humans intent on taking their land. These humans unwittingly awake ancient and powerful forces beyond their control. Fans of the genre should definitely check out this highly addictive series. We also included it on our list of the must-read new fantasy & sci-fi books in 2016.

Pre-order it on Amazon.

5. The Spider’s War (The Dagger and the Coin #5) by Daniel Abraham 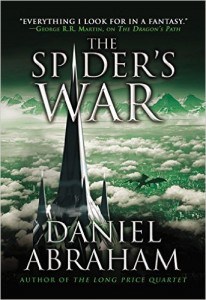 The Spider’s War is the highly anticipated conclusion to the five-part epic fantasy series The Dagger and the Coin by Daniel Abraham. Abraham has been known to collaborate with George R.R. Martin, and is also half of the writing duo known as James S.A. Corey. Fans of A Song of Ice and Fire should consider giving this series a try; it employs a similar chapter/point of view style, full-scale war, and political intrigue. The characters are all complex and well-developed, the world building is spectacular, and the conclusion successfully ties together all the plot threads in a satisfactory manner. If you haven’t already, start with the first book, The Dragon’s Path; if you have, then don’t miss this appropriately epic ending to an excellent series.

6. The Return of the Witch (The Witch’s Daughter #2) by Paula Brackston 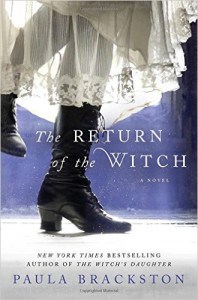 Paula Brackston made a spectacular debut in 2011 with her first novel The Witch’s Daughter; now, five years later, the New York Times bestselling author is following up with a sequel, The Return of the Witch. While her other books seem to have met with lukewarm reviews, their are many readers who absolutely love them, and her latest book is receiving largely positive initial reviews. This book picks up five years after The Witch’s Daughter, and while reading it as a standalone book shouldn’t hinder your enjoyment, you would be missing out on some of the backstory. If you read the first and didn’t enjoy it, you might consider giving this one a try anyway; many reviewers report that the sequel is a massive improvement. Elizabeth, the heroine and a witch, must find Tegan and protect her from Gideon, a dark warlock. The Return of the Witch is a captivating story set against an interesting historical backdrop.

Pre-order The Return of the Witch here.

7. What is Yours is Not Yours by Helen Oyeyemi 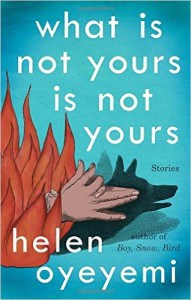 What is Yours is Not Yours by Helen Oyeyemi is an imaginative collection of short stories centered around the theme of keys (both literal and metaphorical). Oyeyemi’s writing unique and absolutely spellbinding, with a fable-like quality. It might not be everyone’s cup of tea, but we recommend you try this anthology if you like short stories (or even if you generally don’t). Each story is substantial on its own but all are loosely interwoven with common themes and some character overlap. If you haven’t read any of Oyeyemi’s works before, let this book be your introduction to her lyrical writing style and breathtaking prose.

8. The Last Mortal Bond (Chronicle of the Unhewn Throne) by Brian Staveley 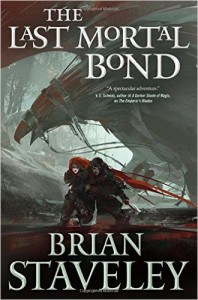 Another popular fantasy series comes to a close with The Last Mortal Bond, the final (and longest) installment in the Chronicle of the Unhewn Throne trilogy by Brian Stavely. As with most epic fantasy series, it has inevitably been compared to George R.R. Martin’s work; that seems to be the standard against which all other series are now judged. So, if you are a fan of A Song of Ice and Fire, you may well enjoy this series, which began two years ago with The Emperor’s Blades. Now, the empire is embroiled in a war for humanity’s survival as the ancient csestriim attempts to wipe them out, while gods and other supernatural beings walk the Earth, attempting to influence the tide of the war; siblings Valyn, Adare, and Kaden are at the center of the chaos. With skillful worldbuilding, endearing characters, and compelling action, it’s not hard to see why this is one of the most popular recent fantasy series, and the conclusion does not disappoint.