Body horror recently seemed like a lost genre that studios would never bother touching again. While the shift for horror has been geared more towards exorcisms, angry spirits, and masked killers, Bite feels like a breath of fresh air. Harkening back to films such as The Fly and The Thing, director Chad Archibald not only pays his respects to these movies, but adds his own twist to them. Now don’t get me wrong, Bite isn’t a perfect film, but it stands as a great example of the power this fairly dormant genre has.

The basic set up is a fairly formulaic one at first glance. A group of young and attractive women travels to Costa Rica for a vacation to celebrate a bachelorette party, only to have one be bitten by a mysterious bug. Said victim and lead of the film Casey (Elma Begovic) then returns home some days later to her work-obsessed fiance only to discover that bug bite she received is more than what it first appears. Eventually, this bite’s infection spreads through her body and eventually turns Casey into a living, humanoid version of the insect that pushes her to the brink of madness. Now I realize this sounds fairly by the books, but the layers of development received to both the characters of Casey and her fiance Jared (Jordan Gray) help draw interesting and unique parallels to her metamorphosis.

This story, at its core, is fairly straight forward in terms of the beat by beat storytelling. If you’ve watched any kind of monster movie before, then you should have a general idea of where this story is going — that’s not a bad thing, but it may detract from some of the bigger spectacles that Bite tries to pull off. If there is one sour note with the narrative, it has to be the god awful ending Bite just fizzles out. Most of Bite is dealing with bigger topics, like what it means to be human, does love transcend extreme changes, and the resistance to having a child. But, the last ten minutes throws all of that out for a cheap set up for a possible sequel. Yes, this doesn’t ruin the enjoyment of the movie as a whole, but it feels like one of those cheap horror endings that clearly there for the purpose of looking to the next movie in this possible franchise. It also doesn’t help there’s some especially cheap looking CGI used that would make SyFy proud. Thankfully, the main character, Casey, easily carries both the plot and major character developments on her own. 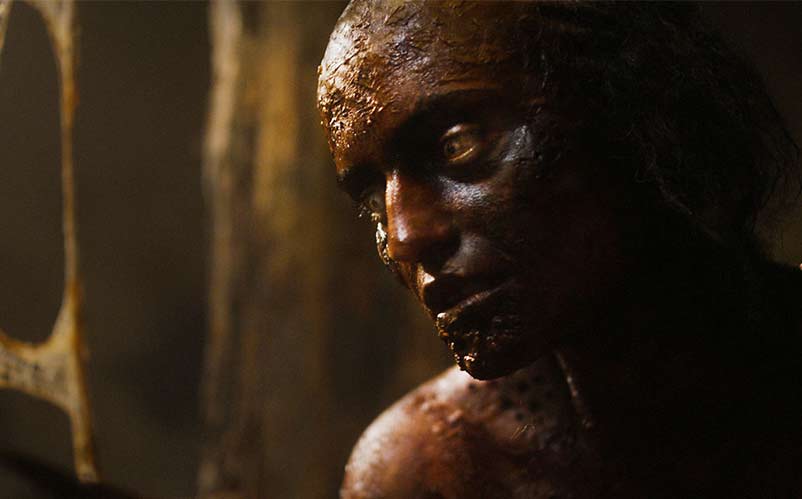 One of the major developments we learn early on about Casey is that she gets pregnant (I won’t spoil the who or the how), but has no desire to have children. It’s an ingenious way to explain why she wouldn’t go see a doctor right away, as many of her early symptoms mimic that of early pregnancy. This choice also helps flush her personality and motives out beyond that of a typical pretty horror victim, as it allows you to connect with her character more. She is not the villain in a traditional sense as there is rarely a point ever in Bite where Casey willing embraces her fate with open arms. Most of the gruesome deaths are by accident or out of her control, placing her into more of the image of a tragic heroine archetype than a typical monster villain. There isn’t a real antagonist in Bite, which is one of its greatest strengths, as it challenges our traditional perception of monsters. We should hate Casey and be afraid of what she’s become, yet I couldn’t help but feel sorry for her fate. It’s clear for most of the film that this is out of her control and it makes for an interesting climax at the top of the third act.

When she finally does go full bug woman, Begovic dominates the screen like a seasoned scream queen. Spanning a wide range of emotions, she gives Casey real depth that helps solidify the terrorizing pain that the soon to be monster is going through. Her transition is fascinating to watch, as the sound design alone for the entire metamorphosis is wholly unique and fascinating. Director Archibald punctuates every crack and movement of her body with various insect sounds that help enhance Casey’s gruesome changes. It’s a nice touch to add cricket noises or cockroach hisses, as it lends the entire process a more organic and “realistic” touch. Though the score at times is a bit underwhelming, it’s this interesting use of sound that allows Bite to stand out among other horror films.

Now that’s not to say Bite is the pinnacle of horror films, as there are some fairly noticeable flaws throughout the movie. While the two leads are interesting, it’s the three supporting characters that lack any sense of substance. Both of Casey’s friends are nothing more than standard horror archetypes that don’t do anything interesting with the “good” friend/”bad” friend set up. Each one embodies this personality, and once you figure out which friend is the nice one and which isn’t, this causes both their character arcs and purpose in the film to be very predictable. Though the acting from both friends is usually passable, except for some awful dialogue in the opening ten minutes, it’s sad to see both of them lack any substance at all. This goes double for Jared’s mom, played by Lawrene Denkers, who feels like a character that’s walked off the set of a 1970’s slasher film. Her extreme personality and especially her motives are barely ever touched upon, making it hard to care about what befalls her. This is even more frustrating because when it looks like the film is going to have a discussion about why Ms. Kennedy is so hateful of Casey, the film speeds past it, never to bring it up again.

Finally, a special shout-out has to be given for the special effects used in Bite, as it’s really refreshing to see that almost all the effects were practical. Given how well designed some of the big set pieces and transition moments for Casey, it really helps sell the entire experience. Bite is the kind of horror film that clearly is paying homage to an entire subgenre of horror, offering some interesting characters and discussions to be had. Sadly, Begovic didn’t fully make up the entire cast, as almost all of the supporting characters come off as flat, dull stereotypes that we’ve seen a dozen times before. If you can look past this, plus the god awful ending, Bite is a genuinely entertaining horror movie. Though it lacks in actual scares, the stomach churning effects will at least put your stomach to the test. Bite doesn’t reach the body horror pinnacle, such as The Fly, but gives you another reason to distrust any kind of bug, ever.