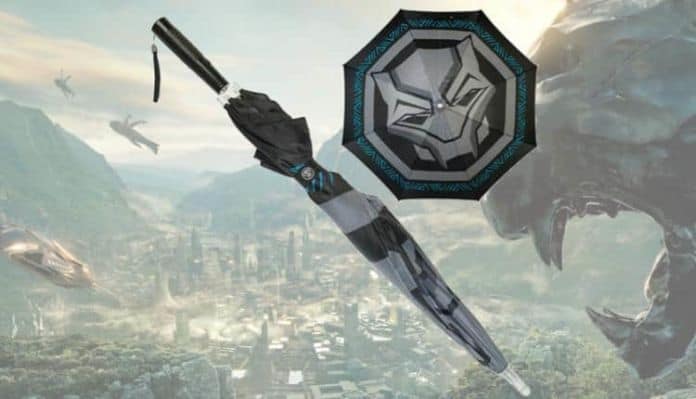 Entertainment Earth presents the Black Panther Logo LED Umbrella, currently available for pre-order at $34.99 USD. It should be coming out of pre-order soon, as the date given is March 2018. However, it might take some time for Entertainment Earth to deliver the product properly. 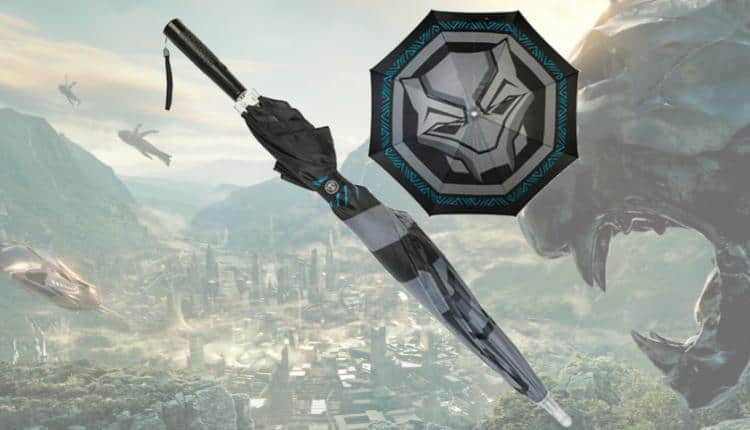 The umbrella itself is not at plain despite the dominant shades of grey. At the very center, we have Black Panther’s mask in strong lines, almost like polygon art. The mask is against black with three circles around it. The first circle is grey, the second a pattern of blue lines, and the third is black.

The top and bottom nubs of the umbrella are a clear plastic but it might still be possible that the ribs are metal for a longer lasting product. The handle of the umbrella is straight and black with a textured grip. There is a small wrist strap attached to the end for extra security while carrying and for easy storage.

In addition, this umbrella has an LED light at the top that can be adjusted between states and strobe settings. The handle of the umbrella has a flashlight but requires AAA batteries. These are not included, nor is it mentioned how many are needed.

Whether or not you love the superhero Black Panther, the movie has been making waves all around North America. It is not the first black superhero movie, nor is it the first all-black cast for a movie, but it is the conditions Marvel has built that make it so unique. For the first time in a long run of trial and error, Marvel has carefully built a movie universe around their comic books.

It started with Iron Man all the back in 2008 and has built to Captain America: Civil War, where we first met Black Panther and witnessed his ascension to the throne. It was only logical that Marvel made a movie about him too, as he will be a part of the Avengers.

So really, what better way to show your support for the movie and Black Panther himself, than getting the coolest umbrella ever?