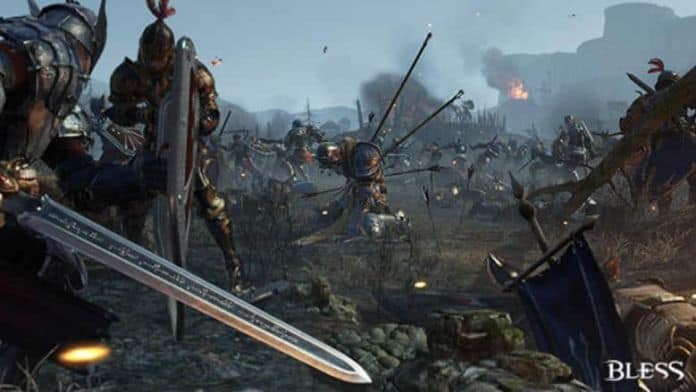 Neowiz Bless Studios has dropped details on the Bless Online Siege of Castra mode headed our way. The developers say the new feature pits up to 140 characters against each other on the battlefield for some epic 70 v. 70 PvP action. 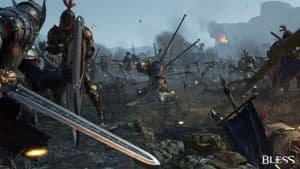 Neowiz isn’t prepared to talk release date yet, but they did want to make the existence of the mode known to start drumming up some hype. In order to participate in Siege of Castra battles your character must be level 25 or higher. Once you enter the mode, you’ll then choose to enter either the Hieron or Union military headquarters to choose your faction.

Each match lasts a maximum of 30 minutes with the goal being to defeat the enemy’s commander located within the opposing faction’s headquarters. Should neither commander be defeated once the 30 minutes is up, the match will result in an underwhelming tie.

There are three branching routes which head toward the opposing team’s headquarters. In the middle is what Neowiz is calling a Purifying Tree. It’s a crucial strategic element to the match, and it’s vital that your team control the Purifying Tree as frequently as possible.

Once a team claims the tree, a “vindictive spirit” will be released and sent to attack the opponent’s headquarters. The spirit is unstoppable, and once the headquarter’s gates fall, it will head directly for the commander to end the match.

On the left and right paths of the map are Guardian Stones. These are what keeps the Purifying Tree and its vindictive spirit in check. Should the team not in control of the tree drain the HP from one of the Guardian Stones, the spirit will then disappear.

We have no idea how long we’ll have to wait to try out Bless Online Siege of Castra. It sounds like a blast though, so hopefully we’ll have our hands on the new mode sooner rather than later.

Previous articleCrackdown 3 Delayed to 2019 (Report)
Next articleUnravel 2 Shadow Dropped at E3: OUT NOW!