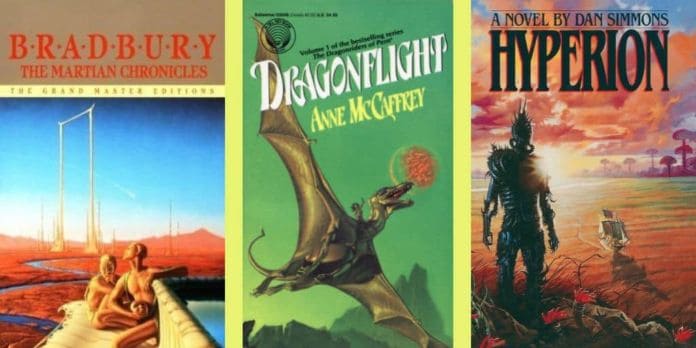 Thanks to Game of Thrones, Harry Potter, and The Hunger Games, most people aren’t totally averse to fantasy and sci-fi movies and shows anymore. This is a magical time when the rest of us nerds get to push our favorite book series on our friends and family in the flashy and digestible medium of film.

There are a lot of types of sf/f to explore besides wizards and children killing each other for food though, and I think we’ve all had our fill of J. R. R. Tolkien adaptations for a little while. Game of Thrones has had a great run, though we’re hoping there won’t be a “next Game of Thrones.” Instead, we want a wave of sci-fi/fantasy movies and shows for a spectrum of different audiences.

Soon, we’ll see adaptations of Annihilation and Ready Player One, and hopefully these will leave people craving more otherworldly IPs (you can check out what other sci-fi adaptations are on the way here).

Source material is bountiful, and there are so many imagined worlds and characters in books that haven’t been explored yet on film. Here are a couple handfuls of sci-fi/fantasy books to movie adaptations we want to see: 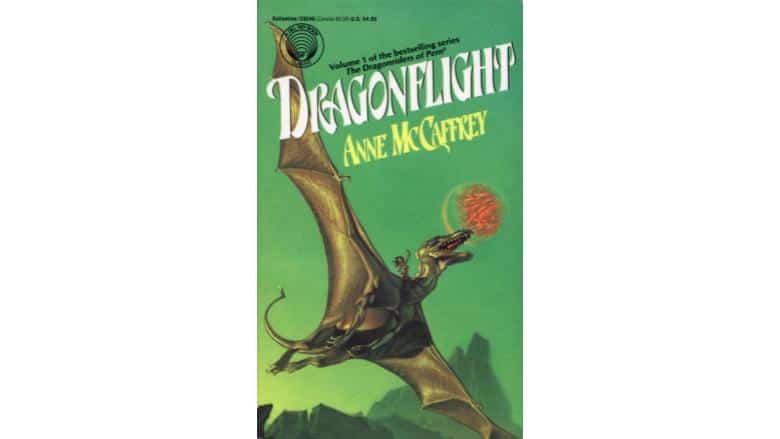 Anne McCaffrey’s Hugo-Award-winning sci-fi series is long overdue for an adaptation. Her books follow adventures of the people of Pern and the dragons that have become an integral part of their cultures. Deadline reported that Warner Bros had picked up rights to the series, but there’s been zero news since then. The two main obstacles for a Pern adaptation are dragons and telepathy (with dragons). We now have the CGI capability to create dazzling dragons for film, but Pern would invariably involve a lot of dragons. As for the telepathy, there’s always the old voiceover telepathy—which can definitely come off as awkward. Still, Anne McCaffrey’s bestselling series has a chance to be a huge franchise.

World of the Five Gods 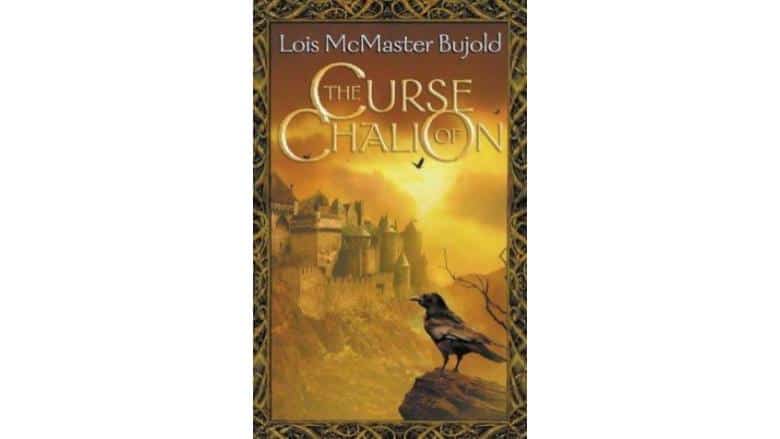 Lois McMaster Bujold’s The Curse of Chalion introduced a political and intricate fantasy world overseen by interfering gods—despite the grand setting, it’s smaller-scale fantasy with many likeable characters. Bujold’s world is complex and well-researched, and there’s plenty of material to work with beyond The Curse of Chalion and Paladin of Souls. The series may be almost twenty years old, but it’s loved by many and its story would translate well to the screen.

Best-case scenario: The first book in the series would be great as a film, as would the second.

Read the Curse of Chalion here.

Josiah Bancroft’s Books of Babel series is so packed with incredible concepts and images—the Tower itself, the sprawling market, the beer-me-go-rounds—that it’s hard to imagine this series not getting picked up for a movie deal. The series follows Thomas Senlin, a school teacher who visits the Tower with his wife, Marya. The tower is hundreds of “ringdoms” tall, and each ringdom has its own culture and history. Upon arriving at the tower, Thomas and Marya become separated, and Thomas sets out to find her, if she’s still alive.

The first book, Senlin Ascends, was just published by Orbit this January (after being self-published by the author in 2013), and its sequel, Arm of the Sphinx, is out in March. This series is bold, unusual, and fresh—all while being fairly tame as far as sci-fi/fantasy goes (this book really sits between the two genres), meaning it probably wouldn’t frighten mainstream audiences. The Books of Babel would dazzle on-screen, evoking tones of Hayao Miyazaki and blending sci-fi, fantasy, and steampunk.

Best-case scenario: Only movies would do the Tower of Babel (one of the tallest fantasy towers ever) justice. Dream casting would be Adam Scott as Thomas Senlin.

Read the Books of Babel here. 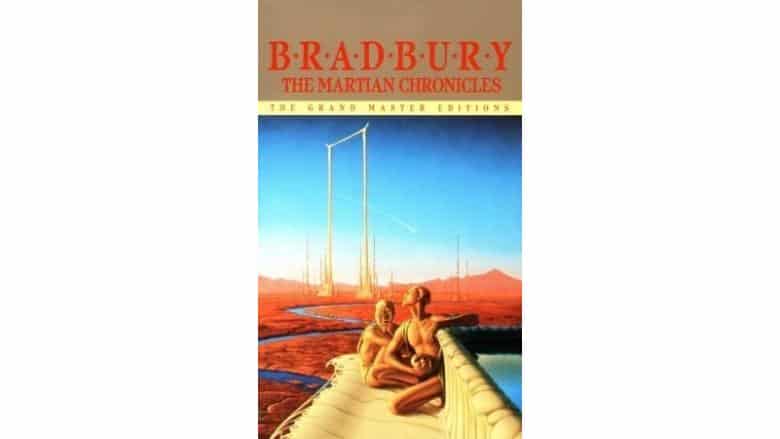 Ray Bradbury’s The Martian Chronicles was and still is a groundbreaking work of science fiction, imagining the human colonization of a Mars with a breathable atmosphere and a civilization of advanced Martians. In fact, it’s on our list of the best sci-fi books of all-time.

The book was adapted as a TV miniseries back in 1980, but it was met with lukewarm reception, and it’s well overdue for a remake. With HBO’s Fahrenheit 451 releasing this year, we’ll see a Bradbury classic on the small screen—and maybe the small screen is the place for his contemplative, idea-driven sci-fi. I don’t really care what format The Martian Chronicles is adapted in—it could work just as well as a movie or a mini-series. But it’s a cautionary tale of humility and human error that I think would fit well with today’s issues discussions. And if we don’t get The Martian Chronicles, I’d take an Invisible Man remake or an adaptation of Dandelion Wine—or anything else Bradbury. You can’t go wrong with his stories.

Best-case scenario: Movie, miniseries, it doesn’t matter. It doesn’t even have to be extremely faithful to the original (a modernization would definitely be necessary). As long as it’s true to Bradbury’s tone and message. 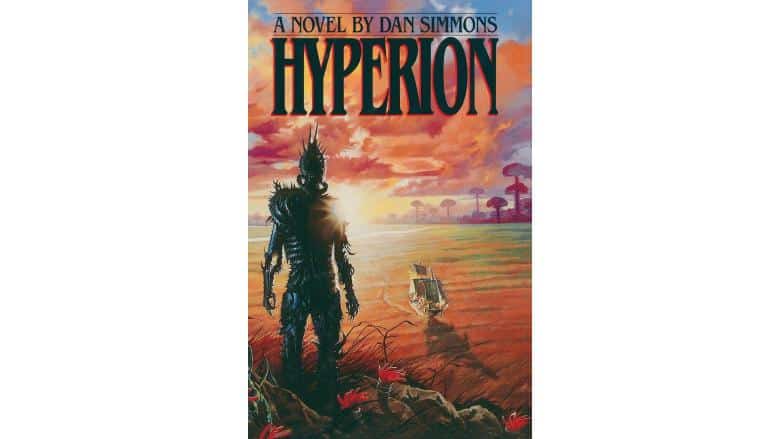 When Dan Simmons reimagined The Canterbury Tales as a sci-fi, he created something brilliant. The plot is out-there, involving lots of time-travel of all varieties, ancient churches, pilgrims, and storytelling. But its multiple perspectives give Hyperion a way to examine different planets and time periods in an intricate universe. SyFy announced a TV series to be written and directed by Bradley Cooper in 2015, but we haven’t heard much since then, and they seem to have their hands full for the time being. I’m doubtful that it will come to fruition, and I’m not sure if a Syfy series is the best idea anyway.

Best-case scenario: Either Bradley Cooper and SyFy knock it out of the park, or it gets picked up somewhere else—but a series (or miniseries) would be a good format for Hyperion and its sequels. 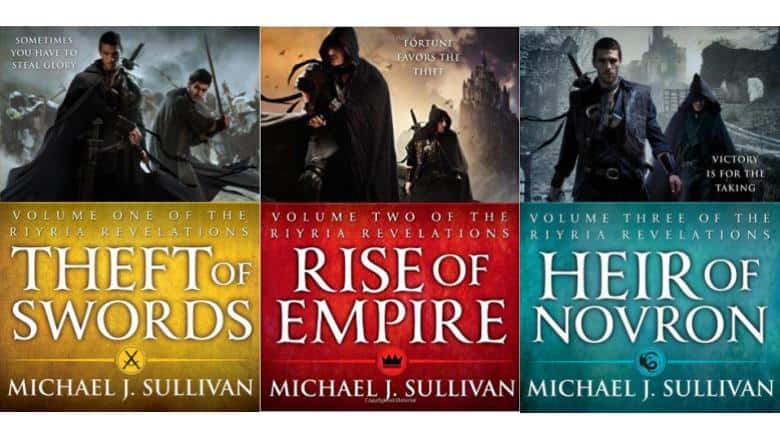 Michael Sullivan’s Riyria Revelations is pure fun, and it’s set in a fantasy world familiar enough (elves, goblins, medieval royalty, wizards) that could fare well on the screen. Sullivan didn’t do anything particularly bold with Riyria, but he did create a tightly-plotted series that is action-filled and has a memorable cast. Riyria follows two mercenaries, Royce and Hadrian, on their various jobs, which almost always involve plots, royalty, and adventure. It’s medieval fantasy at its best, and it manages to be classic fantasy without relying heavily on tropes.

Best-case scenario: TV series spanning several seasons. CGI wouldn’t be needed, though there are a handful of grand setpieces. 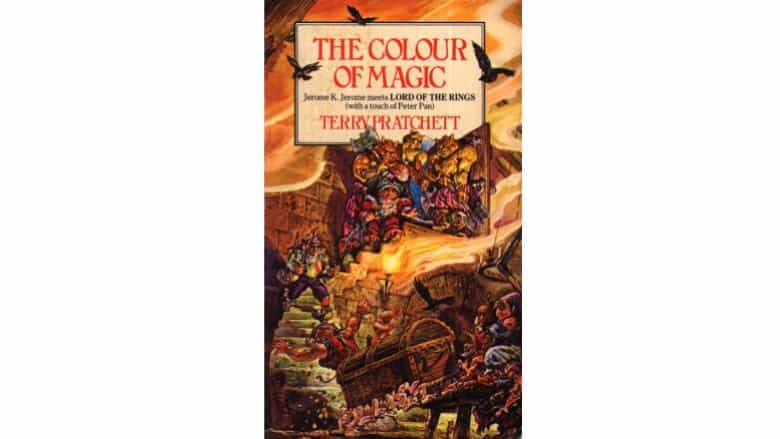 The late Terry Pratchett’s Discworld series spans over 40 novels with hundreds of characters. Several Discworld books have been adapted by Sky One, but it would be great to see a movie or possibly a TV series covering an entire arc (the series is divided into several arcs which follow different characters or groups of characters). Discworld is a satire-fantasy series that is often uplifting and insightful—and always hilarious. No, nothing will live up to Pratchett’s incredible prose and wit, but Discworld is too interesting and vibrant a setting to overlook in this list. Any one of his books would make a great standalone film, but it would be nice to see several films done in tandem and with a consistent cast.

Best-case scenario: All of the Rincewind, Death, or Witches books done as a TV series, or individual books as standalone movies. 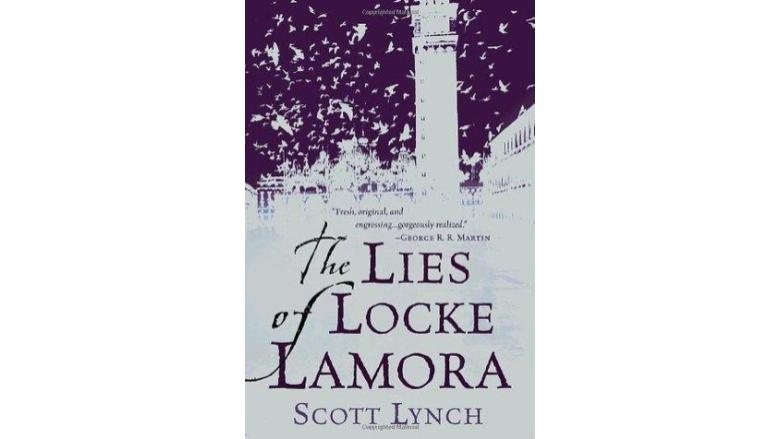 The Lies of Locke Lamora, Scott Lynch’s first book in his Gentlemen Bastard sequence, could make for the same sort of dark, conniving series as Game of Thrones. The books follow the silver-tongued thief Locke Lamora and his adventures in the Venice-inspired Camorr and abroad. There have been rumors of a movie or TV adaptation, but nothing concrete has been announced. While Locke Lamora kind of got on my nerves, it’s a series loved by many, and I think it could work well as a TV series. Lynch’s world and characters are interesting enough that a show could explore plots and places that the books do not.

Best-case scenario: A Miniseries or TV series would work well, especially given how different the three books in the series (released so far) are. 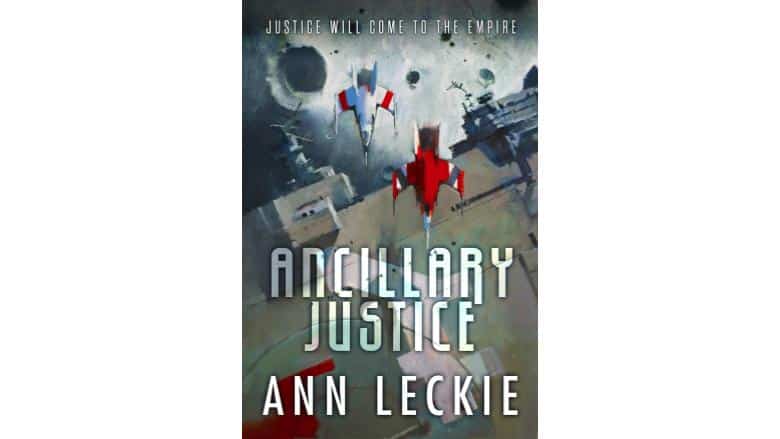 Ann Leckie’s inventive debut novel challenged a lot of sci-fi ideas, and an adaptation would do the same. The book follows an AI of a starship who is in control of a human body, or “ancillary.” The book’s treatment of gender perception is one some audiences may struggle with, and this is an aspect of Leckie’s book (and its sequels) that could not be overlooked in an adaptation. Leckie announced on her blog that the show was optioned for a TV series by Fox back in 2014, but, like many other adaptations, there’s been no news on that front in a while. They presumably still hold rights to any films or shows based on the book.

Best-case scenario: A non-whitewashed, non cisgenderized movie would be wonderful.

A Canticle for Leibowitz 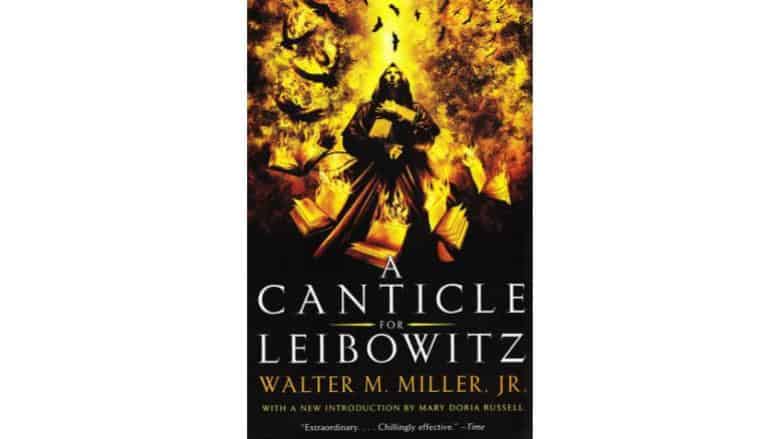 It’s hard to imagine an adaptation that wouldn’t deviate from the source material, but Walter M. Miller Jr.’s sci-fi classic has certainly stood the test of time by now. A Canticle for Leibowitz examines a possible future after a nuclear holocaust and the rebuilding (and redestroying) of society in three parts. Because of the novel’s structure, a single movie would be impossible (and a trilogy is unlikely). The post-apocalyptic genre has been thoroughly explored, but Miller’s vision is still relevant and deserves an adaptation.

Best-case scenario: A three-part miniseries is the only format I could see this working in. 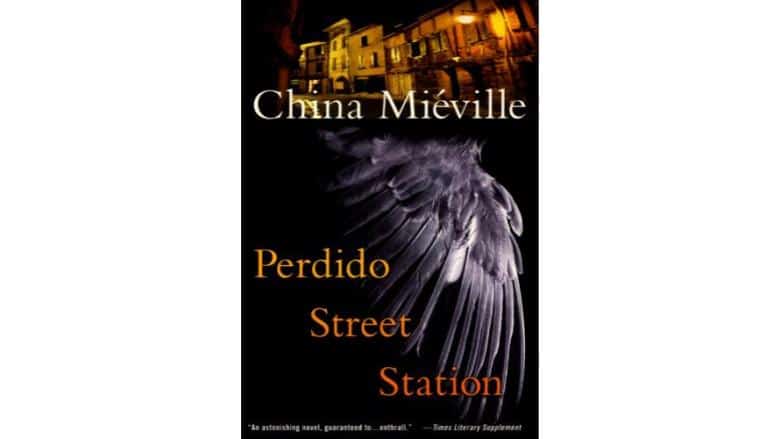 China Miéville’s Perdido Street Station (and any of his Bas Lag books) are bizarre, filled with steampunk, magic, and a variety of unusual races. The BBC has announced that they’re working on an adaptation of The City & The City. A Bas Lag adaptation would be challenging, given the different races and their importance to the plot, but it’s possible, perhaps as an animated film or show.

Best-case scenario: An animated movie is probably the ideal medium for any Bas Lag adaptation.

In this age of remakes, it’s strange that studios aren’t turning to the wealth of material with established fanbases. But I have a feeling that we’ll see that change over the next few years. Are there any made-for-the-screen series that I missed? Let me know in the comments!