Why I Bought Mario Kart 8 Deluxe, Even After Owning It On Wii U 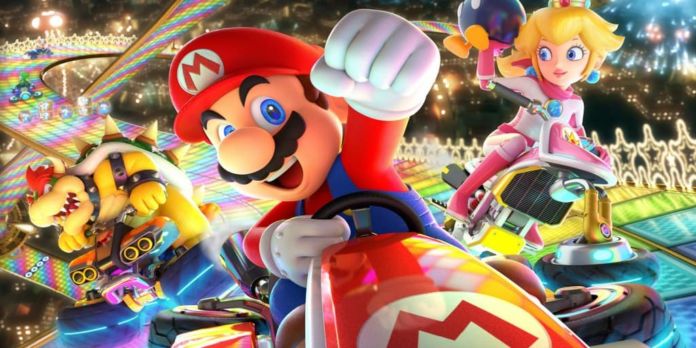 My household had a Wii U so, of course, we owned Mario Kart 8.
And when the DLC was announced we got that too. For those of you who need a reminder, you can read about those original DLC details here.

We went with the latter and, in total, got 4 cups, 6 more characters, and 8 more vehicles. So when Mario Kart 8 Deluxe (i.e Mario Kart 8 + the DLC and a few extras) was announced I didn’t have any plans on picking up any time soon. Sure, I planned on getting it once more of my friends got Nintendo Switches but there was no rush. I’d been playing this game for over 2 years. But then it happened: a tale as old as time… Nintendo’s marketing and hype reared its ugly head.

Here’s how Nintendo got me to buy a game I’d already owned almost immediately.

Mario Kart 8 Deluxe may be a glorified port but Nintendo sold it like it was new which made the purchase feel necessary. I take the train and Mario Kart ads are plastered everywhere.

I walk into Target and am greeted by the sounds of a Mario Kart race starting. Hell, Nintendo even had billboards for this thing. Nintendo made it near impossible not to know that a new Mario Kart was out—despite the fact that this isn’t even new.

For those of us gamers who were on the fence about getting Mario Kart 8 Deluxe (MK8D) we were constantly reminded of this dilemma via advertising. If you decided to just ignore MK8D you really couldn’t.

Hype, due to Switch Hype

If you’re actively involved in the gaming community (i.e follow gamers on twitter, listen to podcasts, read articles, etc) you were guaranteed to hear about Mario Kart 8 Deluxe. And many video game journalists and enthusiasts were having the same debate I was: “is it worth getting Mario Kart 8 Deluxe if you already owned Mario Kart 8 on the Wii U?”

While I haven’t come across any content that outwardly said “yes!” there was a clear consensus across the board: “begrudgingly give in; buy Mario Kart 8 Deluxe on the Switch, even if you owned it on Wii U.” People often cite the battle mode(s) and included DLC as reasons to buy Mario Kart 8 once again. 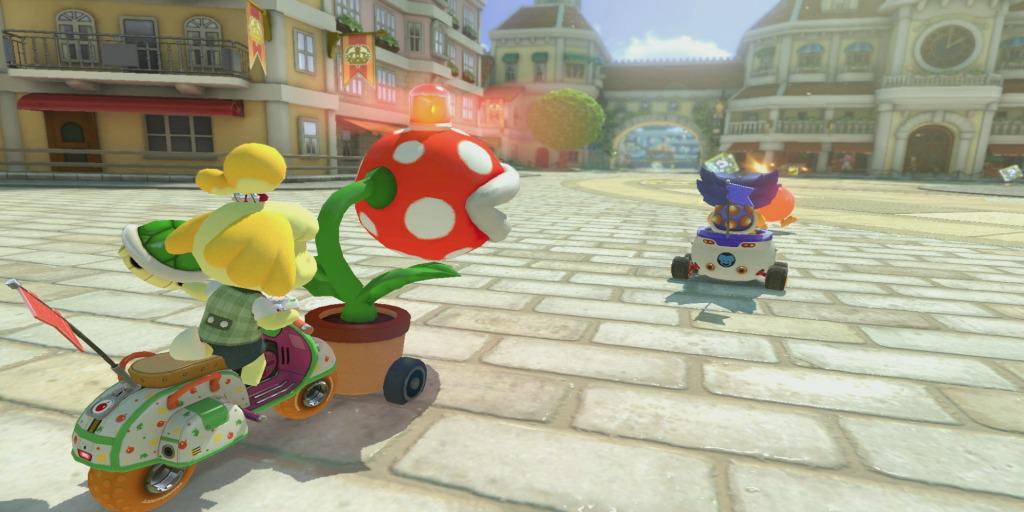 With the Nintendo Switch being a new console, and one that provides players with an inherently unique gaming experience, playing anything on the Switch feels exciting. Combine that with a beloved franchise and its automatic success—despite the salt Wii U owners might feel.

Plus, personally, I’d never actually played battle mode (even on the Wii U). And just like that the reasons began to pile up. I’d see screenshots of Squidkids racing through Wario’s Mine, 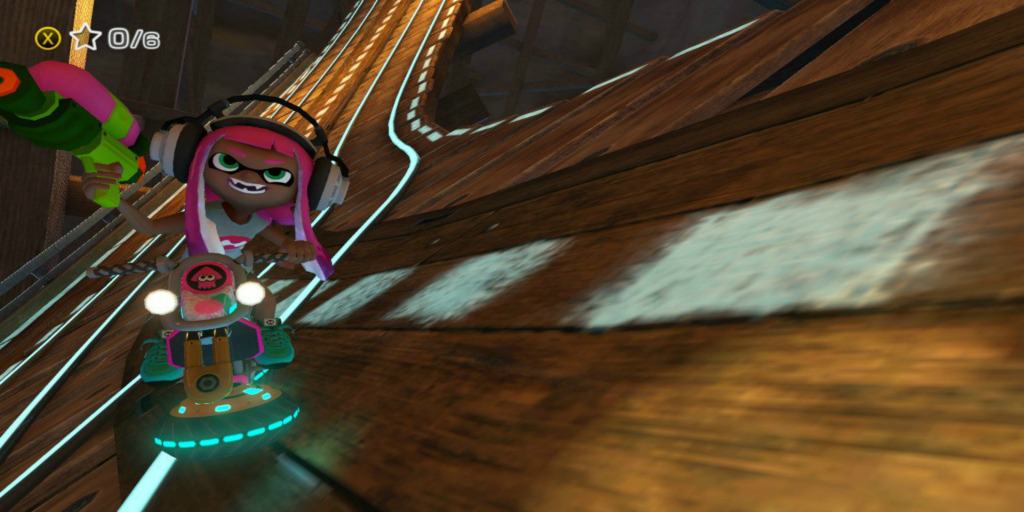 hear stories of people racing each other in cafes, and I knew I’d never revisit Mario Kart 8 on the Wii U anyway. It was bizarre to feel left out after having experienced 2 years of gameplay, yet here I was: on the outside looking in. Everyone else was unlocking car parts and hosting their own tournaments. What was I waiting for? A few more friends to race with? Screw that. I have the whole world via online mode.

In addition to being swept up in the Switch, players are also twiddling their thumbs a bit as they wait for more games to come out. Breath of the Wild may be a huge game but we still need other games to play and, frankly, there’s not much. And outside of Fast RMX, Mario Kart is the only racing option Switch owners have. If I’m not playing Mario Kart 8 Deluxe, what am I playing? And if I plan on buying it eventually, why not just buy it now?

Yup, this was the right choice

When *my brother and I got this game I was excited: Nintendo won; I’ve accepted my defeat, and now we can just enjoy the game. (*it’s worth mentioning that we live together and currently share a Switch).

But when we first started it up I felt pretty stupid. Did we really just buy the same game again? Is everything really already unlocked? Why am I doing this? And how the hell do I turn off “smart steering”? Huh, this could’ve been a huge mistake.

Fortunately, things picked up once we played the battle modes. The thrill of renegade round up, the frantic shuffle for a Shine Sprite, and the ability to play online while having two players locally. Finally, I had the best of both worlds: the joy of facing off against someone in the room met the challenge and novelty of racing online.

But what I really valued was being able to take an experience as superb as Mario Kart 8 and get to enjoy it on the Nintendo Switch. The Wii U’s failure as a piece of hardware has, unfortunately, dragged a lot of wonderful games with it: Super Mario 3D World, Yoshi’s Wooly World, Captain Toad, Donkey Kong Country Tropical Freeze—and that’s just to name a few. I’m glad the Switch is able to give some old titles new life. And if they’re ones I’ve played before, well, I guess I wouldn’t mind a second go-around.

I know it’s pretty basic to turn your life into a Switch commercial, but when I took out my Nintendo Switch on the bar of a Buffalo Wild Wings and ate mozzarella sticks in between races I couldn’t help but feel like this is it. Everything I never knew I wanted. It was at that moment that I knew I made the right decision. 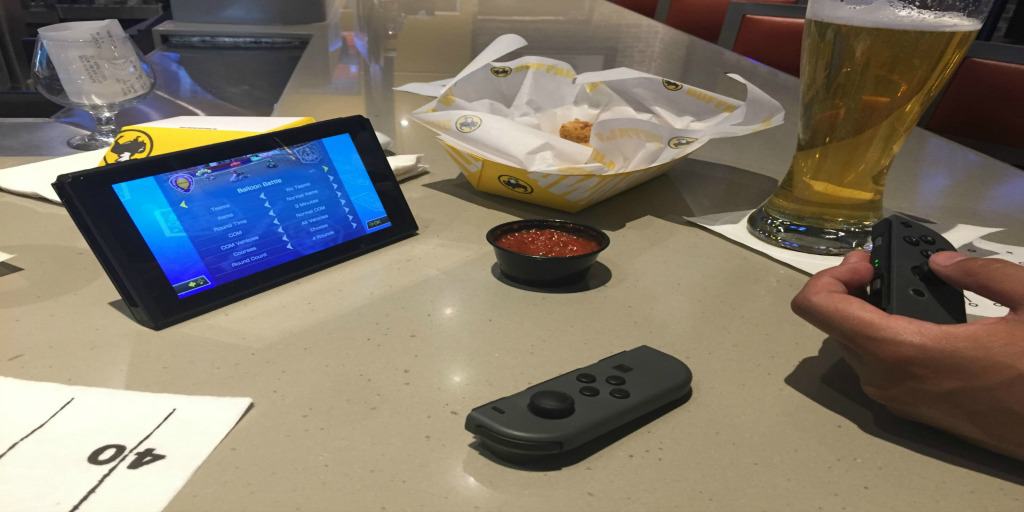