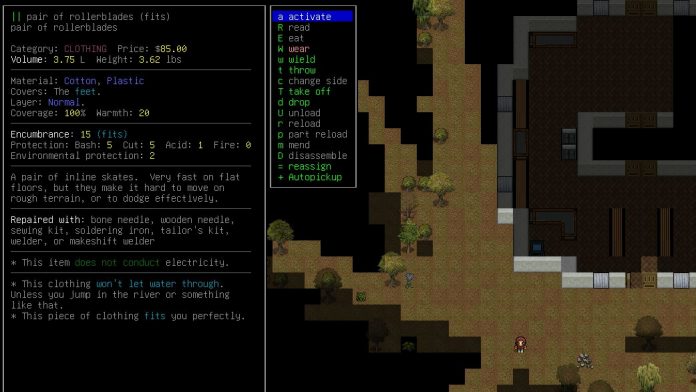 How many game devs does it take to make a game?

It’s a silly question, of course – the answer could be practically anything. Dev numbers certainly don’t dictate how good a game will be. Top-notch titles like Papers Please, Thomas was Alone, and the first Rollercoaster Tycoon were built through the blood, sweat, and tears of a single visionary.

But generally, the larger the game and the bigger its budget, the more people it has behind it. Most indie teams make do with just a handful of developers, while major AAA studios employ hundreds or even thousands to beaver away on their games.

The Exception to the Rule

Cataclysm: Dark Days Ahead, a free, open-world roguelike set in a zombie apocalypse, bucks that trend. Until optional tile sets were added, it only had ASCII graphics; zombies, depicted as little green Zs, would chase you across vast fields of punctuation marks. 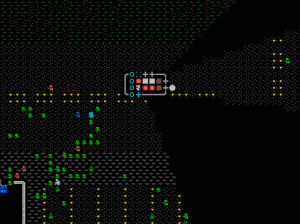 Cataclysm has opted very firmly for depth over accessibility, and new players trying to make sense of its various systems, which range from mutations to sewing, will soon find their heads swimming. A niche title then.

Yet during the course of its 7-year lifespan, Cataclysm: Dark Days Ahead has had over 1300 individual contributors. 1300 developers. To give some perspective, that’s more people than worked on GTA V, the most profitable piece of media of all time. And it’s all because anyone who wishes can come along and leave their own mark on the game.

Cataclysm: Dark Days Ahead is open source, with the source code freely available on the project’s GitHub repository. If you have the know-how, you can make your own code, and – assuming it works properly and gels with the game’s setting and ethos – it will be slotted in for everyone to download. Who hasn’t at some point thought of a brilliant feature they’d add to a game if they could? With Cataclysm, players have that option. The game is built by its own biggest fans.

Cataclysm: DDA is set shortly after a non-specific catastrophic event that’s unleashed zombies, fungus beasts, giant bugs, and worse upon the world. The game is remarkable for the sheer freedom it affords players. The only goal is survival: not an easy task by any stretch, but once you’ve mastered it, the world is your undead, radioactive oyster. Your endgame might be becoming a cyborg, constructing a mobile death platform to retake urban centers, or just building a cabin and living out in the sticks, growing cabbages, and hunting bunnies with a homemade bow and arrow.

It’s a game you can get lost in: rich, complex, and expansive. It’s also, thanks to the efforts of its developers, constantly expanding. In just the last week, the Github reveals, there have been 60,000 additions to the code.

Curtis Merrill, head of the game’s official Discord, is part of the team that checks over all of these potential additions. He tells me the amount of work each contributor varies wildly. The vast majority “make a single contribution and then stop,” he says, which leaves, “a relatively small number of core developers doing a large amount of the work.” But people come and go as they please, so at any one time, he can’t be sure how many people are creating Cataclysm.

The project lead, Kevin Granade, 41, joined Cataclysm in its earliest years. Like most contributors, Kevin got to tinkering with the game after noticing that something was missing. “I stumbled across the original Cataclysm and started playing and before long noticed that there were ‘no bikes in the apocalypse’,” he says, incredulous. Silent, fast, and easy to maintain, logic dictates that a bicycle would be invaluable in the end times, yet most apocalyptic settings neglect the advantages of pedal power. “So I cracked open the code and shimmed in a bicycle vehicle along with support for ‘muscle-powered engines’.”

From there, Kevin continued to fiddle with bits of code, and when the original creator, known by the username Whales, went on permanent hiatus, he stepped in with several others to continue the game in an offshoot branch. As time went on, he gradually inherited the project, becoming more and more involved as other senior members dropped out one by one, until eventually, he found himself alone at the helm.

The Nuts and Bolts of Development 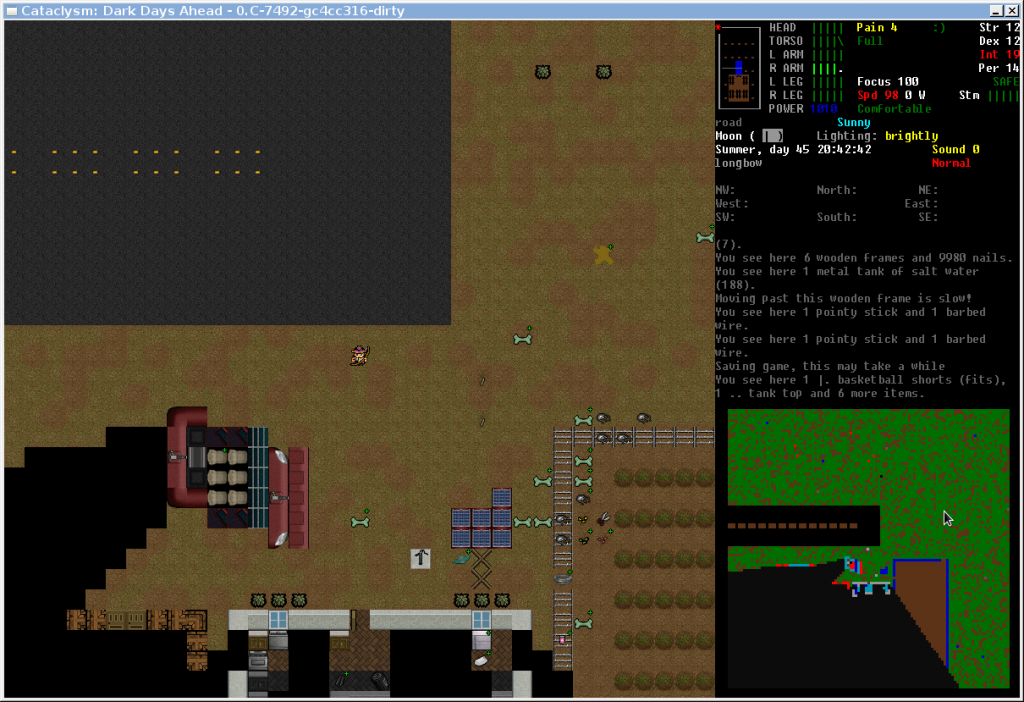 Cataclysm’s development process looks very different from that of a traditional game. It’s a hobby, not a job, so Kevin can’t really assign tasks to anyone. Curtis explains that his own personal process consists of seeing what needs doing and cracking on with it while letting others know what he’s working on.

“People in the developer group have their own areas of expertise,” he says. In other words, as Kevin acknowledges, everyone pretty much does whatever they feel like. But despite the numbers involved and the hobbyist approach, he feels “the degree of cohesion among the team is surprisingly high. Everyone wants the game to be better, and we all have a really good degree of agreement on what that means in practice.”

Nonetheless, it helps to have someone steering the ship. While he’s worked on code for pretty much every aspect of Cataclysm, Kevin’s most important role is arguably to decide the game’s direction. He speaks of the responsibility involved in leading a game that’s the collective creation of so many people. “The way I see being project lead of an open-source project like this is, I have 100% freedom to take the project wherever I want, but I have absolutely no ability to bring anyone with me if they don’t want to come.” Kevin goes on to say that if, in a bout of spontaneous lunacy, he were to announce that Cataclysm was now going to be a Candy Crush clone, he’d be within his rights to do so but would quickly find himself working alone. There’s a very clear requirement, as he puts it, “to tell people where the game is going and stick to it.”

That’s where the design document comes in. This enormous tome is a guide to setting and design philosophy both, explaining in detail what Cataclysm aims to be and cataloging the game’s myriad secrets. Just one of the many ways that the core group of developers coordinates their efforts, the intention is to manage expectations and minimize disappointment for anyone bringing ideas to the table that don’t quite fit. Kevin explains that by making his plans as public as possible he can “let people decide for themselves if this is a project that’s going the direction they want it to and if they want to contribute to that.”

Cataclysm has changed a lot over time. While it still has plenty of little idiosyncrasies, the general trend has been towards a less arcadey, more realistic experience. Players should be able to use their “real-life brain” instead of their “puzzle brain” to succeed in the game. But there’s some recourse for those who want a wackier apocalypse, free from all constraints. The realm of modding lets developers exercise their wilder ideas, populating the game world with dinosaurs or legendary weapons. Curtis has personally devoted a lot of time to a pet project, an overhaul mod called Magiclysm, which injects the sci-fi setting with spells and fantasy.

Bringing You Up to Speed 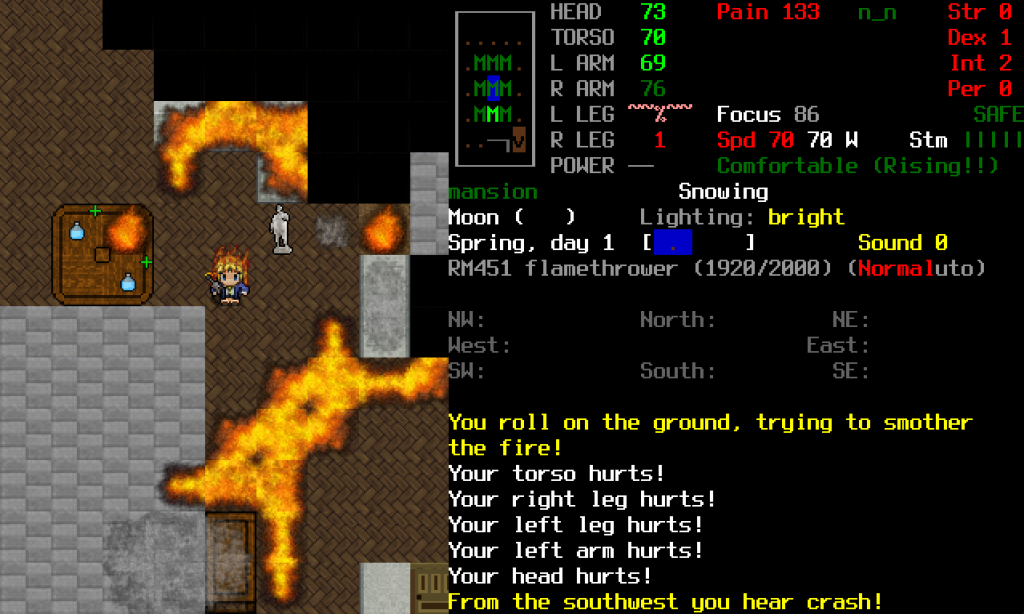 Whereas most projects overseen by large groups will carefully select their developers before bringing them on board, in Cataclysm the screening process is for contributions, not contributors. This allows the team to utilize as many people as possible and maximizes the game’s variety. Kevin has tried to make contributions to the game as easy as possible to encourage more people to get on board. “There are techniques and ideas and approaches we can come up with collectively that I would have never come up with on my own,” he explains.

Many hands make light work, and the Cataclysm team, larger than it’s ever been with around 50 active members, is currently moving fast. “We’ve really picked up the pace and in very real terms we’ve made as much progress over the last year as we made in the previous three,” Kevin says.

This is reflected in the rate the game has grown. A couple of months ago, the new ‘Ellison’ update was launched, an enormous expansion that roughly doubles the number of entities in the game. Players can now craft boats and amphibious vehicles, build camps for their NPC companions and shimmy up drainpipes to parkour between rooftops. What’s more, an entirely new faction has been added to the game, a sinister race of psychic, extra-terrestrial mi-go.

It might be a while longer before I personally explore these new additions. Despite countless hours of gameplay, I’m still just scratching the surface. Most of my characters spend their short existence struggling to knit socks or madly chasing raccoons across the plains. One day, perhaps, I’ll fix up a car or break into one of the mysterious labs that dot the landscape. Till then, it’s nice to know there’s so much out there waiting for me. And, thanks to Cataclysm’s huge and ever-changing team, there’ll always be more to experience.

Previous article6 Batman Video Games We Want Announced Next
Next articleSkate 4 Wishlist: 10 Things We Want From The Next Skate

Matt Bassil
Matt Bassil is a freelance journalist and lover of obscure indie games. You can find his work at Dicebreaker, The Face, Tabletop Gaming, and more.