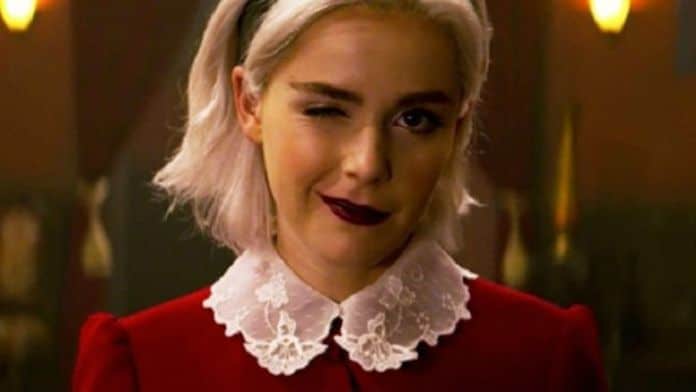 Back in October, Sabrina herself, Kiernan Shipka, revealed that the cast was currently filming for Season 2 of the show. As it turns out, Shipka and the crew weren’t actually filming Season 2, but instead Part 2 of the show’s first season. Today, however, Netflix confirmed that the Chilling Adventures of Sabrina Season 2 is official.

Netflix released a statement this morning confirming the Chilling Adventures of Sabrina Season 2. They’re calling the next installments Part 3 and Part 4 for the series. They confirmed that production will take place at some point in 2019. Season 1 of the show will return with new episodes when Part 2 of the show begins streaming on Netflix as of April 5th.

The series’ creator and executive producer, Roberto Aguirre-Sacasa, released the following quote with the Chilling Adventures of Sabrina Season 2 announcement:

“Praise Satan! I’m so grateful to my partners at Warner Brothers, Netflix, Berlanti Television, and Archie Productions for supporting this darker vision of the world’s most famous teen witch. And I’m thrilled to be continuing to tell Sabrina’s chilling adventures with our incredible cast and crew, led by the unstoppable Kiernan Shipka.”

Netflix compares the Chilling Adventures of Sabrina tonally to Rosemary’s Baby and The Exorcist. They describe it as “a dark coming-of-age story that traffics in horror, the occult and, of course, witchcraft.” Netflix’s take on the property focuses on “Sabrina wrestling to reconcile her dual nature — half-witch, half-mortal — while standing against the evil forces that threaten her, her family and the daylight world humans inhabit.”

We don’t have a timeframe as to when the Chilling Adventures of Sabrina Season 2 will begin streaming. But it’s likely that the show will follow suit with Parts 1 and 2 and release Parts 3 and 4 around October and April.

Previous articleDegrees of Separation, a Hot and Cold Co-Op Platformer, Announced
Next articleNanoleaf Canvas Smarter Kit is the Coolest Way to Light Your Home