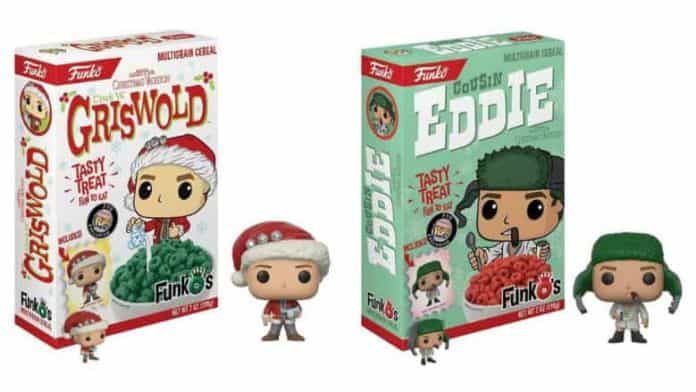 FYE is bringing breakfast to your table this holiday season. The outlet is exclusively offering their Christmas Vacation Funko cereal packs which contains not only cereal, but also Pocket Pops of both Clark Griswold and Cousin Eddie.

The1989 classic comedy, Christmas Vacation, is a must-watch during the holiday season. And there’s nothing that could pair better with the iconic film than these Christmas Vacation Funko cereal packs to are made in their honor. The miniature Pocket Pops of Clark and Eddie that come within the box are wee ones and about 2 inches tall. But they each have distinguishing features that ensure everyone will know the characters they’re representing.

The miniature Clark Funko is wearing his Santa jacket and hat while holding his glass of eggnog. And while Clark’s rendition is fine, he Cousin Eddie miniature Funko is fantastic. The figurine has a cigar in his mouth and a beer can in his left hand. And the only thing he’s wearing is his green hat and bathrobe. He even has a smattering of chest hair detailing his upper torso. The only thing the Cousin Eddie Funko is missing is a button that has it yell “Shitter’s full!”

FYE typically sells these Christmas Vacation Funko cereal packs at $14.99 a pop. But both the green Clarke and the red Cousin Eddie versions are currently on sale for just $12.99. I couldn’t imagine a better cereal for breakfast, or for a snack, over the next couple of months leading up to the big holiday itself.

How to Stream Jingle All the Way