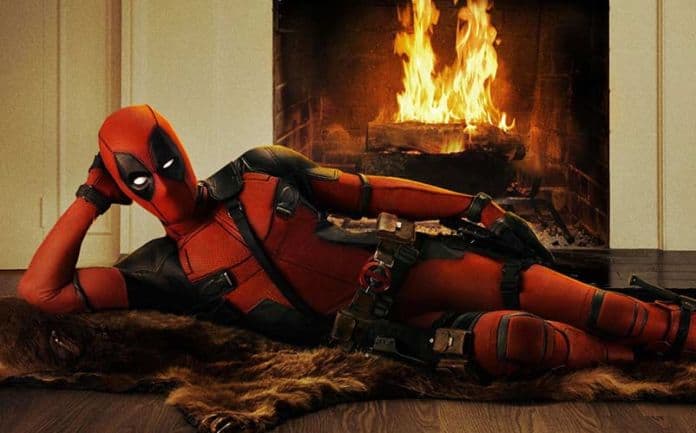 Ah, Deadpool. There is no doubt that he is one of the most popular superheroes right now, especially with his new live-action movie premiering this Thursday. A trip to your next anime or comic book convention will result in several Deadpool appearances, as he has become a fan favorite to cosplay.

Why is Deadpool so popular? One reason why many people love Deadpool is because of his attitude, which is shown through his many memorable quotes from the comics, video games, and cartoons he has appeared in. More of an antihero than your typical Marvel do-gooder, Deadpool is sarcastic, crude, and not afraid to speak his mind whenever he wants.  Below are 10 funny Deadpool quotes to brighten your day:

1. “You just killed the deranged chick from the juice bar that I was gonna score with someday maybe!” 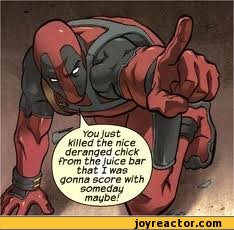 It’s no surprise that Deadpool would say something like this, especially since he is a ladies man. Instead of having a sad or serious reaction that is expected of any hero when a “love interest” falls to the hands of the enemy, Deadpool uses informal language that results in an undeniably hilarious line. What makes this quote even better is his uncertainty. It would be even more interesting to know the context of this situation, which can only be found within the comics.

Who doesn’t love pancakes for breakfast? Especially when there are 374,844 of them. What makes this quote memorable is Deadpool’s twist on the generic line “I love the smell of ____ in the morning!”, the “smells like victory” being a nice touch. Adding to the hilarity of the situation is Deadpool’s apron and chef’s hat, packing the punch for an effectively funny line.

The infamous bit of advice given by instruction booklets or phone operators when electronics seize to work is to “turn it on and off again”. However, when all else fails, don’t be afraid to nudge it, shake it, or kick it… if you are Deadpool. The change of expression between panels makes this quote even better, since his happiness on his mask covered face is evident. Even superheroes need a little R&R from fighting crime. A play on the iconic phrase, “Guns don’t kill people, I kill people”, Deadpool, although holding two powerful looking guns, mentions “doorknobs” as a potential life threatening “weapon”. His expression, pose, and outfit make the quote even better. Well done parody is always the best, especially when a character pulls it off.

Deadpool definitely looks “manly” with his awesome costume, washboard abs, and overall attitude. However, when someone insults his scooter, he quickly has to defend himself, insisting that it is in fact a “motorbike” and 100% manly. Probably the only thing that would have made this scene even better would have been if he was riding a Segway or another questionable mode of transportation. Nice try Deadpool, but you didn’t convince us that you are a cool guy.

6. “Citizens! It is time to be thrown violently to safety!”

An oxymoron at its best, Deadpool feels the need to put “violently” and “safety” into once sentence. In comic books, innocent citizens are easily the targets of any villain’s attacks, and they must be protected by the heroes at all costs. This typically involves seeking/providing shelter for victims, flying them to a safe area, or defending them from an attack. However, Deadpool takes matters into his own hands, throwing the citizens to their “safe zone”. For him, it couldn’t be done a better way. Captain America is best know as the first Avenger with who embodies patriotism and American values. For many, he was the first Marvel superhero (or Avenger)  fans loved and admired in the comic book world, beginning his journey by fighting in World War II. However, some may not like Captain America’s “do-gooder” personality or demeanor, especially the villains. Deadpool expresses his dissatisfaction with someone who hates the famous Avenger, questioning how they could even feel such a way towards him. Deadpool reminds his enemy that even though he is from an entirely different country, he likes Captain America in all his patriotism and American spirit.

8. Most everything from the Deadpool video game 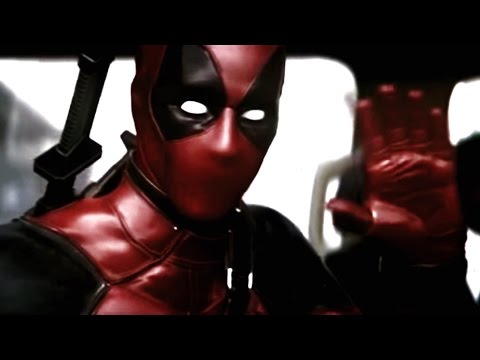 Viewer discretion advised. There are many reasons to play the Deadpool game, from the 4th wall breaking moments to the interesting scenes that completely redefine the “superhero” game genre. However, many of the best times are when Deadpool comments on something, resulting in an entire video game full of memorable quotes and hilarious moments. This video showcases some of the best quotes from the Deadpool game, complied by YouTuber RandomBlackGamer. If this was not a good enough reason to pick up the game, nothing is.

9. Deadpool and Spiderman in Ultimate Spiderman 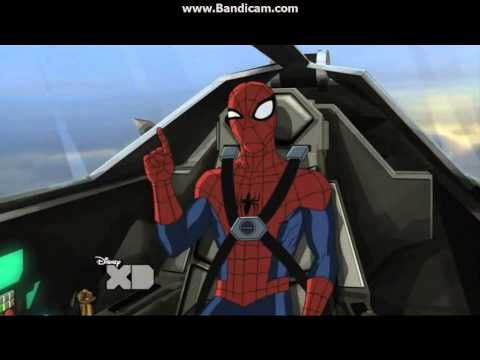 “Origin Story Time YEAAA!” Although the Deadpool game was more adult oriented, Disney XD’s show Ultimate Spiderman had some amazing moments that showcased Deadpool’s craziness and spontaneity that stays true to his character in a more “family friendly” cartoon. Some of the best moments in this series are between him and Spiderman, who Deadpool is often mistaken for. Although the show does not solely focus on him, the moments he appears are great, and when he appears, it often results in some funny Deadpool quotes. Is Deadpool a nerd like us? He may very well be, especially in this picture. “Outta the way nerd!” He screams while toting two Japanese-style swords, a headband, and a cape. This contradictory picture makes this quote even better, causing fans to question who’s the REAL nerd is here.

Previous article
GameTrailers.com Shut Down After 13 Years
Next article
Color Your Own Deadpool Book