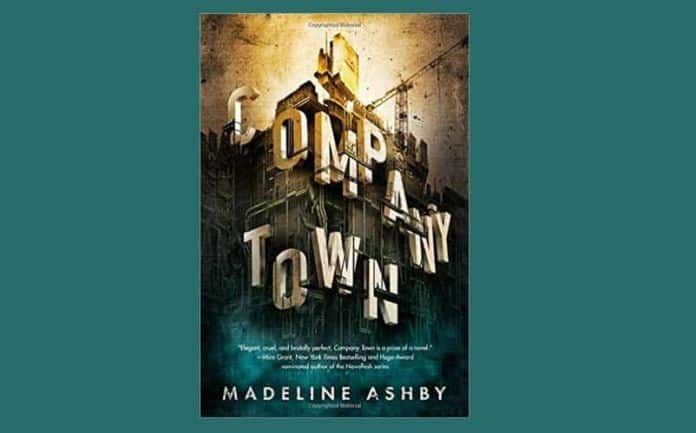 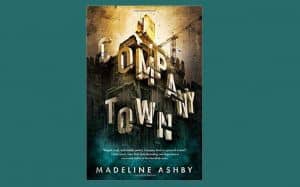 I wanted to like Company Town by Madeline Ashby, I really did; the description and the main character are what pulled me in. The premise sounded incredibly promising, and indeed it is; however, it fails on almost every level in execution. Admittedly, there are a few elements about the book that I enjoyed, but overall it just doesn’t work. It took me an entire week to read this 285-page book, because I just wasn’t at all compelled to keep reading.

First of all, this book would have benefited from being significantly longer; under 300 pages is just not enough to accomplish what the author set out to. As a result, the story feels incredibly rushed, to the point where it is sometimes confusing; there are several action scenes that needed far more description, as they leave the reader with no idea how Hwa got from point A to point B, and it makes no sense as a result. For example:

The scene with the school shooter needed to be far more explicit about the layout of the area. Hwa gets shot and flees to the bathroom; in one sentence, it states that the door doesn’t lock, and then two sentences later says that Hwa locked the door behind her. There is no mention of pursuit from the shooter, and then moments later they run from the bathroom to the elevator unassailed. Why did the shooter just leave them the moment they entered the bathroom? It makes no sense.

The resolution is anticlimactic and also makes little sense, so I finished the book completely unclear how everything was connected. There are some interesting ideas regarding alternate timelines and transferring one’s consciousness; again, however, the author does not fully explore these concepts, so it leaves the reader feeling like she is rushing to wrap things up. It never really explains why Hwa is so important to the timeline, and ends with too many questions unanswered.

There is also a complete and utter lack of worldbuilding. We are just dropped into this world with no context whatsoever, which would have been okay if the author described things as she went; she doesn’t, however, and as a result I found it difficult to picture everything in my head. Overall, the book just isn’t fleshed out nearly enough, and it feels very choppy as a result.

The one redeeming factor in the book is Hwa; as main characters go, she’s very likable, and her relationships with both Joel and Daniel are very endearing. I wish it had explored her past more, like her relationship with her mother and her time spent as a bodyguard to the prostitutes (she had great friendships with them, as well), but you do get the sense that her acerbic tendencies are a defense mechanism because she’s used to being mistreated and overlooked. I wish that her remaining completely organic was more of a personal choice than a result of her being too poor; why is she the only one on the rig that can’t afford enhancements? Again, never explained. The fact that she is not only a woman, but an Asian woman with a disability is fantastic; however, I was more than a little irritated by the fact that sex with a man is what ultimately “fixes” her.

It’s possible that Madeline Ashby has potential as an author; as I said, there were some intriguing ideas and a few strong characters. However, this entire book feels rushed and underdeveloped; with a little more time and at least a hundred more pages, it maybe could have been something special. As is, however, it falls completely flat and left me feeling more than a little disappointed.