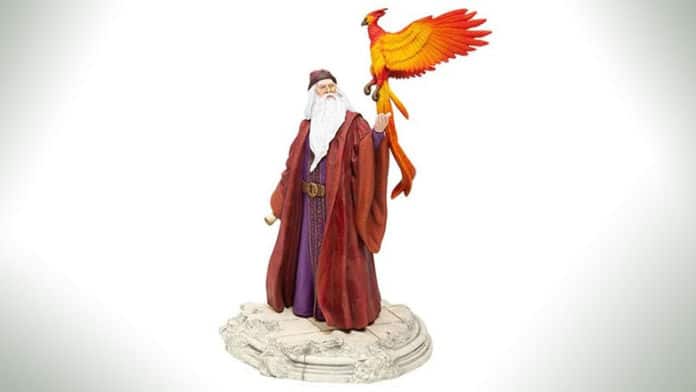 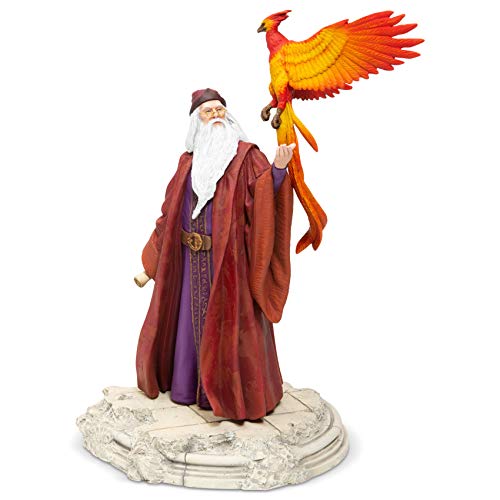 The Headmaster of Hogwarts joins you in your muggle abode with this vibrant statue. Joining Dumbledore in a fiery blaze of reds and oranges, is Fawkes, his trusty Phoenix. Measuring 12” x 9.5” x 12.5”, the statue depicts Albus Dumbledore and Fawkes in incredible detail, with every feature of both characters displayed in scaled realism.

When not guiding Harry Potter and company on their misadventures or protecting Hogwarts from the evils that threaten its students, Dumbledore is sitting in his chambers, Fawkes squawking nearby. The studious and intelligent headmaster appears almost regal in his red robes with the bird of fire swooping down to perch on his outstretched arm. They both stand upon a base of decorative tile and an ornate design.

There’s no denying that this is an essential showpiece for any fan of the Harry Potter series. Collectors may veer toward pieces featuring the titular wizard or Lord Voldemort, but Dumbledore proves his worth as a collectible with this detailed statue. You won’t regret adding this piece to your line of Harry Potter statues. It may even take over as the central focus thanks to its bright colors. And, of course, Fawkes is a really cool animal to have front and center of the rest of your Harry Potter merchandise.

This Professor Albus Dumbledore and Fawkes statue is made of resin and calcium carbonate. It’s a detailed piece at every angle, from the strands of Dumbledore’s long white hair and Fawke’s long, flaming tail.

Potter may have been the hero of the Harry Potter film series, but there’s no denying the role that Albus Dumbledore (and Fawkes) played in helping the young wizard. You know, like that time Fawkes helped him in the battle against Salazar Slytherin’s basilisk.

Of course, you can also check out more ridiculously cool Harry Potter stuff to add to your collection.