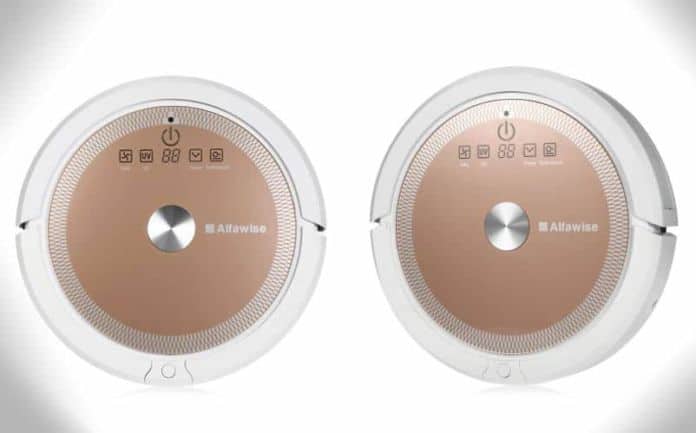 **A review unit was provided for testing purposes.**

I’ve always found it necessary to name my robots and most electronics I own. My newest PC is named Mia (from AMC’s Humans), my Xbox One S is named Beta (after The Last Starfighter), and now, I’ve named my new Alfawise A6 as Alfred (yes, after the butler in Batman lore).

Secondly, the A6’s auto-charging functionality is a great feature to have. As long as your charging base is always plugged in, the robot vacuum will find its home base all on its own when it needs to recharge, recharging itself fully without any need for you to interact with it or plug it in (although, for the record, you can plug it in manually as well). It takes a while for the vacuum to find its charging base on its own at first, but once it learns where the base is, it is able to remember the location for next time. This helps to make the Alfawise A6 basically entirely autonomous, aside from maintenance and removal of the dirt it collects.

Speaking of direct it collects, I was surprised by how much the A6 actually picked up. I’d like to think that I keep a pretty clean household, but with an 8-year-old and 4-year-old running around all day, you’d be surprised just how much of a mess they can make. The A6 is not only able to pick up dust and dirt, but also various other bits of unsightly things, including clumps of dog hair (we have a corgi…he sheds like crazy!), super tiny LEGOs, scraps of paper, hair ties, and more. Obviously, it doesn’t pick up bigger objects that might be on your floor, so a walkthrough before your scheduled vacuuming is a smart idea. But on its own, the A6 picks up a lot, thanks to strong suction power and its dual side brushes that swing out around the vacuum to snag dust and dirt in its path.

The vacuum automatically cycles through 5 preset patterns during its cleaning in an effort to get the best cleaning coverage. It starts with a Special Bounce mode, then a spiral pattern, followed by a perimeter following mode, then Zig-zag, and finally, a polygonal mode. Users are also able to remote control the vacuum using the included remote, and they can also select any one of the five cleaning modes at any time.

Maintaining the Alfawise A6 vac was easy. The side brush and roller brush are both simple to remove for when string/long hairs get tangled, and emptying the dust bin is as simple as it is on my Dyson (just a push of a button).

Unfortunately, the Alfawise A6 only comes in one colorway (white with a “pink” top that’s actually more copper-looking), and we would have really liked to have seen a black or even white and black version (or virtually any other color). Nitpicky? Sure is — I realize most won’t care about the vacuum’s color. But when you have this little guy scooting around your home, you’re going to take notice of that ugly copper color.

But when you factor in the price in comparison to most other smart robotic vacuums, the Alfawise A6’s color issue can be ignored. It comes in at $139.99 from GearBest, and for what you’re getting for that price, it’s one of the best bang-for-your-buck robot vacuums on the market.

For more of the latest cool stuff to buy and waste your rent money on, stay tuned to Nerd Much?.