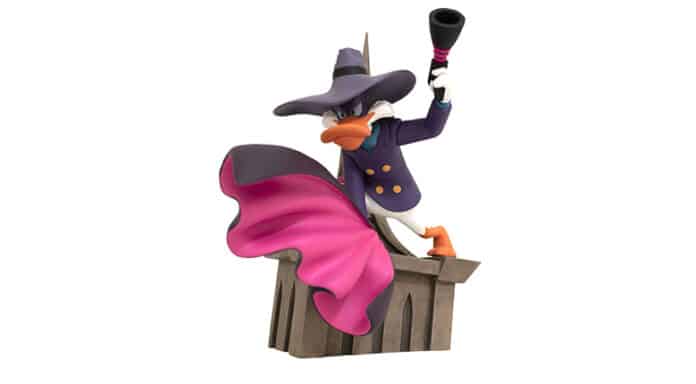 He’s the terror that goes flap in the night! He’s the switch that derails your train, the neurosis that requires a $500-an-hour shrink, the jailor that throws away the key. He is . . . Darkwing Duck! And he can be all of yours when you preorder Diamond Select Toys’ new Darkwing Duck PVC Diorama.

Based on the beloved Disney Afternoon series, this nine-inch tall Darkwing Duck PVC Diorama was designed by Barry Bradfield and sculpted by Varner Studios. Drake Mallard’s superhero alter-ego stands atop a stone St. Canard building, gas gun in hand, ready to take on Megavolt at a moment’s notice.

His iconic purple mask, wide-brimmed hat, and jacket conceal his identity, and his flowing cape is enough to strike fear into the hearts of villains like Bushroot and Quackerjack.

Diamond Select Toys’ Darkwing Duck PVC Diorama is expected to ship in Spring of 2023, and no other characters in the Darkwing line have been announced. Although maybe by the time you’re able to add this collectible to your shelves, you’ll be able to preorder a Launchpad McQuack or Gosalyn Mallard, too.

Also in Darkwing Duck news, Disney announced in 2020 that the series is getting its own Disney+ reboot, with Seth Rogan and Evan Goldberg as attached producers.

In the meantime, though, you can rest assured that your streets are safe and free from the looming threat of dangerous criminals. Diamond Select Toys’ new Darkwing Duck PVC Diorama serves as a shadowy guardian who hunts the city’s thousand criminals like a phantom in the darkness. No one will dare touch your collectibles when this anthropomorphous duck stands amongst your ranks.