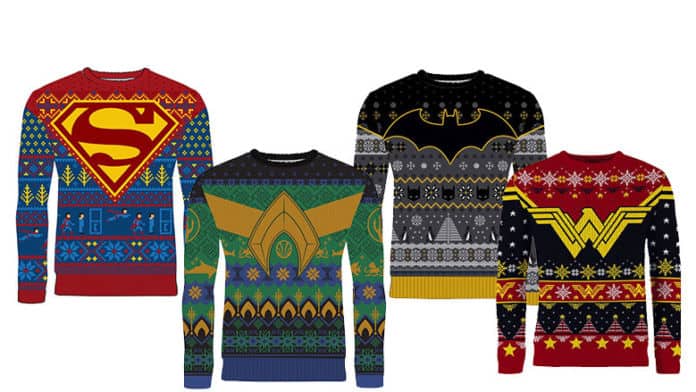 When the Justice League hosts an ugly Christmas sweater party, it’s always a toss-up as to who will win. Let’s just say we’re lucky their superpower isn’t reliant on how well dressed they are.

Wonder Woman, Superman, Batman, The Flash, and Aquaman join forces in these 5 new DC Christmas sweaters from Merchoid, each one uglier – yet more charming – than the last. First, we have Wonder Woman’s red, blue, and yellow motif. Right at the center is her updated logo, which branches off into two sets of bars that overlap onto the shoulder. A mix of stars and snowflakes fill in the empty space on this knitted sweater, creating a delightful pattern sure to bring joy on Christmas Day.

Superman counters Wonder Woman’s use of red, blue, and yellow with a sweater that unashamedly puts his logo as the focus. The large “S” is hard to miss against a backdrop of blues and yellows. Abstract patterns cover much of this sweater, but it’s the graphic of Superman turning into Clark Kent that really sells the design.

Speeding onto the scene in maybe the least offensive DC Christmas sweater is The Flash. His scheme of yellow, white, and red puts a heavy emphasis on the red, which contrasts the yellow and white of his iconic logo. Small figures representing The Flash about to speed off to get some spiked eggnog is knitted near the waist of this Christmas sweater.

The Dark Knight turns his cowl to goodwill and cheer with a Batman Christmas sweater that’s all black and grey tones with a touch of yellow accents. The top quarter of the sweater is actually really cool, with a perfect representation of the Bat Symbol separating a pattern of snowflakes from the mishmosh of images knitted below.

From the depths of the Atlantic rises Aquaman, King of Atlantis and inspiration for this most interesting sweater. Along with Aquaman’s emblem, the sweater features an underwater design with dolphins, octopuses, and tridents creating an unmistakable pattern. Though Aquaman has no problem sporting it in water, wearing this knitted holiday sweater while swimming is ill-advised. It’s simply not comfortable.