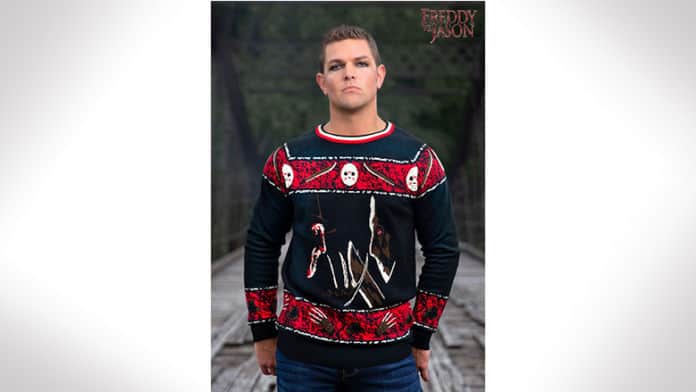 Pay tribute to the fight of the millennium with this Adult Freddy Vs. Jason Halloween Sweater.

Move over ugly Christmas sweaters. Freddy Krueger and Jason Voorhees are matched up on this bloody ugly Halloween sweater. The horrifying duo goes toe-to-toe on the front of this unisex sweater, which sports a banner of both villains’ favorite killing tool. The black sweater features two bright red banners for each slasher icon – one across the upper back and shoulders and the other closer to the waist and wrists.

It’s double the kills when Freddy and Jason come onto the scene together. Whether you’re a fan of one or both, the officially licensed Freddy Vs. Jason Halloween Sweater is something that belongs in your wardrobe. Break it out when you’re feeling the need to represent the horror community or save it for Halloween night as an impromptu costume. Nothing beats an ugly Halloween sweater; especially one that displays two of the season’s biggest stars.

In the dead of winter, Freddy and Jason will snuggle with you on the couch. Their villainous nature is a lot cozier than you would expect. Don this sweater when watching the rivals square off in the 2003 film that brought them together and inspired this knit-in design.

Will you get sucked into Freddy’s dreamland? Or find yourself meandering the woods outside of Camp Crystal Lake? Maybe you’ll find the two universes merged together into one nightmare scenario. There’s only one real way to find out. Pick up this horror favorite and see which franchise pulls you in. Just don’t get caught in the middle of their squabble over who’s the most terrifying of them all.

Made from heavy acrylic and designed with a knit-in pattern and ribbed cuffs at the wrist, waist, and neck, the Adult Freddy Vs. Jason Halloween Sweater is much more comfortable than it probably should be. Machetes and knife-fingers aside, it’s a cozy addition to any closet.