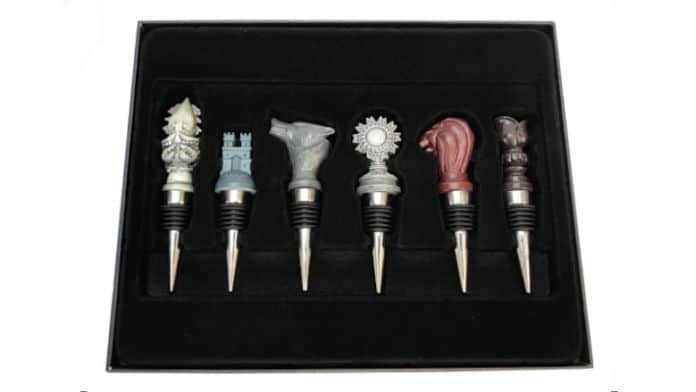 Here at Nerd Much?, we drink and we know things. And when we can find some cool accessories to make us feel better about our debilitating alcoholism, well then, that’s all the better. Today we’ve stumbled upon (and I do mean stumbled) just that in the form of these awesome Game of Thrones wine stoppers.

From Fun.com comes this set of Game of Thrones wine stoppers which are inspired by six of the great Houses in Westeros. Houses include Greyjoy, Frey, Stark, Karstark, Lannister and Tyrell. Each of them is represented by a House sigil that is easily recognizable by an A Song of Ice and Fire or Game of Thrones fan. Fun states that each of them are “duplicated from the same digital assets used to create the actual map marker props during the production of the series.”

Fun’s officially licensed Game of Thrones wine stoppers come packaged in a gorgeous box set. And they make a fantastic holiday gift at a reasonable $59.99.

These Game of Thrones wine stoppers aren’t the onlybooze-themedd items available to commemorate George R. R. Martin’s A Song of Ice and Fire series though. HBO and the brewers at Ommegang have been pairing to introduce a line of Game of Thrones inspired beverages for the last couple of years.

Currently on the market is their Mother of Dragons porter. The brewers at Ommegang describe it as having “Aromas of chocolate covered cherries intertwine with subtle smoke and roasted malt.”

After the Mother of Dragons comes the Jon Snow inspired porter the King in the North. The bastard’s brew is described as “rich and full with notes of chocolate, vanilla, coffee, and roasted malt up front followed by smooth bourbon and a hint of oak.”

Mother of Dragons is available now and the King in the North will be available on Black Friday, November 23rd. Both 750ml bottles list at $12.99 individually. Or, you can purchase them within this year’s Royal Reserve Collection for $24.99. The Collection features the two bottles above, as well as Hand of the Queen (a Tyrion Lannister inspired barleywine) and Queen of the Seven Kingdoms (a Cersei Lannister inspired sour blonde blend). A free Game of Thrones pint glass is thrown in too.

You can order these Game of Thrones wine stoppers from Fun via this link right here. And hey, even if you don’t partake, the box is still really pretty too.