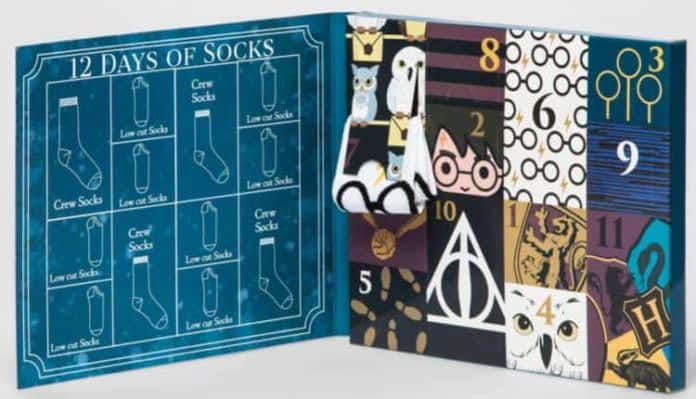 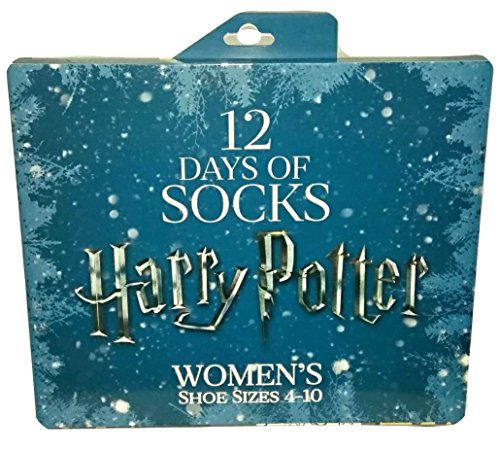 Target is solemnly up to no good with this set of 12 Days of Harry Potter socks advent calendar. For only $15.00 USD you can get 4 pairs of crew and 8 low-cut socks. Snuggle up with these beautiful socks that are sure to compete with Dumbledore’s taste in gaudy socks, and maybe those Harry Potter Christmas Ornaments you got for the tree.

The first crew cut pair, and possibly my favorite, has a pattern of purple over a black background. At the top is a white simple but classic version of the Deathly Hallows symbol.

The second pair of crew socks is completely white with “the Chosen One” written in black, along with a pair of glasses, and a yellow lightning bolt at the top. White socks, something only The Chosen One in your household could keep clean for five minutes.

The third pair of crew socks is in a pattern of three different owls, including Hegwig, Pigwidgeon, and a large brown owl that could be the Lovegood’s, Malfoy, or McGonagall’s. All three have a large Eagle Owl, which is usually brown and quite large.

The fourth and final pair of crew socks are themed after Hogwarts pride, with a dark grey background, the school crest, and the full “School of Witchcraft and Wizardry” emblazoned in appropriately colored stars.

The 8 crew socks are a little less detailed. Two of which are Quidditch themed, one being the Seeker in Gryffindor colors, and the second a Keeper in Ravenclaw colors.

Another is simply the Gryffindor house crest because there is never quite enough Gryffindor in Harry Potter merchandise. Another two are also related, themed after the Marauder’s Map.

One states “I solemnly swear I am up to no good” and the other states “mischief managed” in gold, grey, and white. Another pair has a mini Harry Potter face and scarf, looking very young and cute.

The second to last pair is purple over black with the word “muggle” written on the bottom feet portion. Finally, last but certainly not least, are the pair with Hedwig holding Harry’s acceptance letter.

**Update: These are no longer available at Target, as they were a seasonal release in 2017. However, there are still a few available on Amazon this year (as of writing this update).