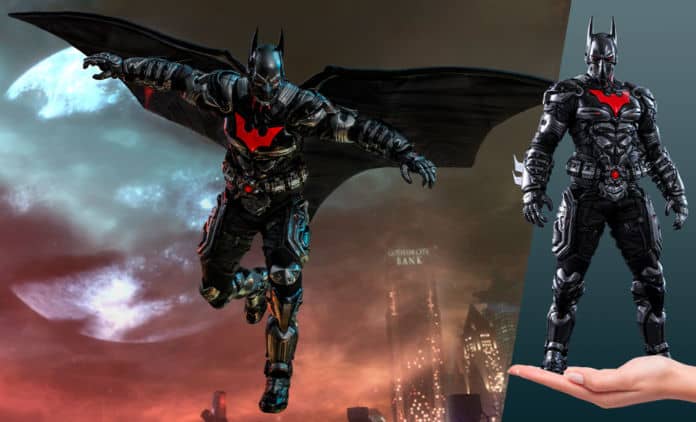 Combining the unforgettable Batman Beyond TV series and the realistic detailing of the Batman Arkham video game series, this Sixth Scale Figure delivers the best of both worlds. As an homage to the cyberpunk version of Batman, the figure sports the intimidating black and red color scheme of Batman Beyond in this Batman Beyond Sixth Scale figure by Hot Toys.

The suit’s armor and the figure’s stature were pulled right out of the Batman: Arkham Knight video game.

While uncovering the truth behind the Arkham Knight, Batman breaks out different suits from his career as the Caped Crusader. Among them is the Batman Beyond suit, originally worn by Terry McGinnis after Bruce Wayne retires in the animated series. While the Batman Beyond skin was released as part of the “Gothams Future” skin pack for Arkham Knight, Batman collectors can bring the iconic suit home thanks to the masterminds at Hot Toys and Sideshow.

The fully articulated figure sports many of the features from the Batman Beyond series along with some of the Dark Knight’s toys from Arkham Knight. Included in the gadgets are a Batman Beyond-styled Batarang, REC gun, freeze grenade, grapnel, and disruptor. Batman is also able to take to the skies to glide over Gotham with a tailored black cape.

Pose the Dark Knight as you like using this assortment of gadgets and accessories. No matter how you pose him, he’ll be a menacing display piece thanks to the solid black armor with hints of devilish red. Even his red eyes seem to stare at you with malice, letting you know that he won’t be putting up with any lawlessness.

The 6” figure comes with interchangeable hands and faces, 30 points of articulation, and hand-painted head sculpts from artists Yeon Sun Jeon and JC Hong. It’s all packaged with nine gadgets and a dynamic figure stand with the Arkham Knight logo.