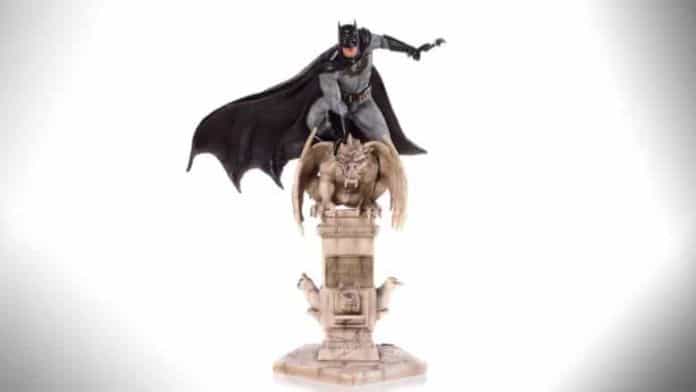 Iron Studios takes on the Dark Knight with their Batman Deluxe Art Scale 1/10 – by Eddy Barrows. This is a fantastic depiction of Batman that even casual fans of the comics-icon would love to see on their shelf. But when it comes to the price of $149.99, this statue may only be something for the most hardcore Batman fans.

The statue depicts Batman perched for action on one of the iconic Arkham Asylum stone gargoyles. The gargoyle is crouched on a pillar featuring the Arkham Asylum placard and four animal heads, lending the whole pillar a suitably gothic flair. The perch and gargoyle have an aged marble appearance, suitable for Gotham City’s notorious asylum.

Batman is depicted in a more modern interpretation of the iconic Batsuit as seen in the recent run of DC comics. The bodysuit is a light grey, and the infamous cape and cowl are traditional black. Batman’s bat-symbol on his chest is rimmed with a gold color while the utility belt is gold with black segments for each pouch. Batman has one hand perched for stability on the gargoyle, and the other hand with a Batarang at the ready. The detail of the sculpt is impressive not only with the weathered marble but the fabric of Batman’s cape and the rippling muscles of Batman himself.

This limited-edition statue is based on an original concept by Eddy Barrows and results in a fierce, iconic Dark Knight. The statue itself is made of polystone and is hand painted. The product dimensions measure 11.8 in (H) x 8.2 in (W) x 6,6 in (L) and it weighs about 1.8 pounds. The statue is set to release in the last quarter of 2019, but can be pre-ordered right now. The pre-order is 10% of the suggested retail price of $149.99.

The statue is a truly impressive sight, but the price might be a deterrent for anyone who is not a major Batman fanatic. 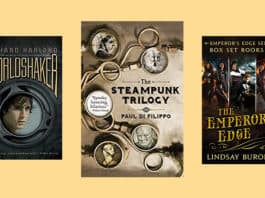 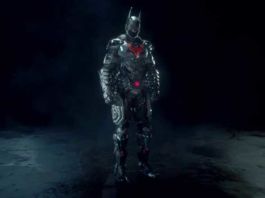