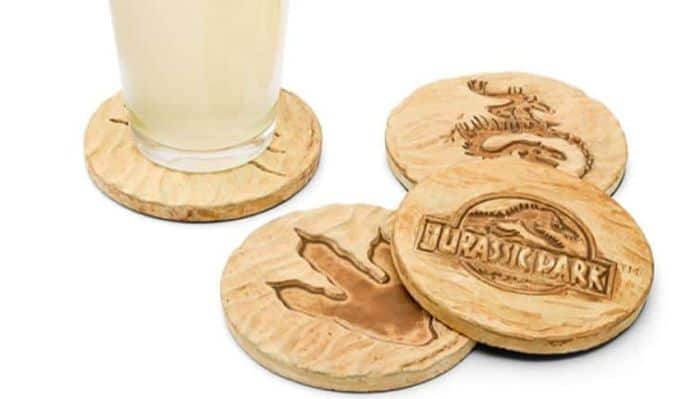 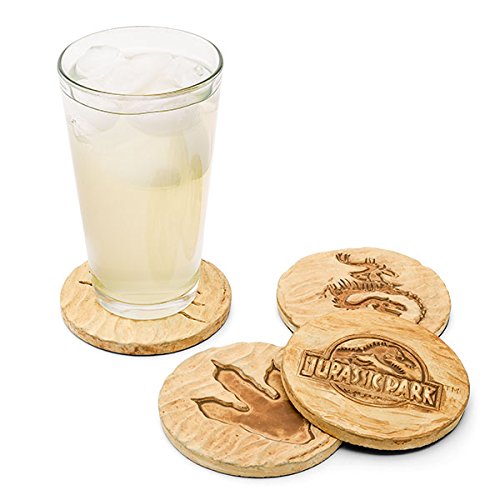 Jurassic Park Coasters Set of 4
Buy it on Amazon

Have you recently watched the Jurassic World: Fallen Kingdom trailer and longed for the time with Jurassic Park was good? Good news! These Jurassic Park Coasters are here to remind you of that golden Spielberg age.

You know, just like the ones you’d find in the souvenir shop of the actual Jurassic Park if it were real. I know this because I’ve been to the Royal Tyrell Museum before. If there was a real-life equivalent of Jurassic Park but in museum form, it would be the Royal Tyrell. As such, coasters are among the many many dinosaur-themed merchandise you can get at the enormous gift shop there.

The Jurassic Park Coaster comes in a set of four, all made out of ceramic. Each is stamped with a different icon from the movie against a background of what is surely supposed to be sand. Though a real fossil of such would be normally be found in stone, not sand.

The first icon is the logo of the park itself with the silhouette of the infamous T-Rex. The second coaster has a T-Rex footprint (sensing a theme yet?). The third is a whole skeleton of what could be any dinosaur. Something just vague enough to be a raptor, as the tail is too long to belong to a T-Rex. Last but not least, are three claw marks, evenly spaced to indicate a single slash.

If you’re worried that these ceramic coasters might be too rough on your table, never fear. The Jurassic Park Coaster includes small felt pads on the bottom to keep from damaging your table and sliding around too much.

Each tile measures at 4 inches across and half an inch thick. Plenty big enough to fit almost any glass size. Perhaps not a large beer mug, but those are not likely to appear at a fine family dining occasion. 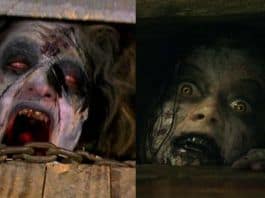 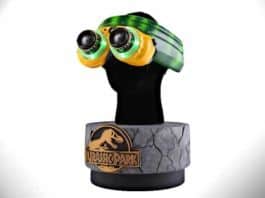 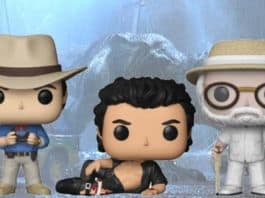