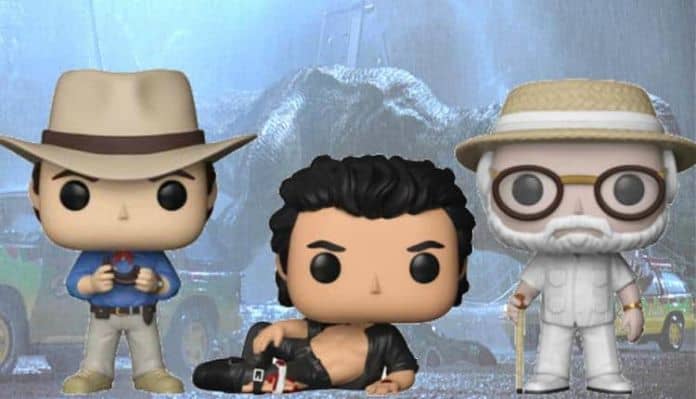 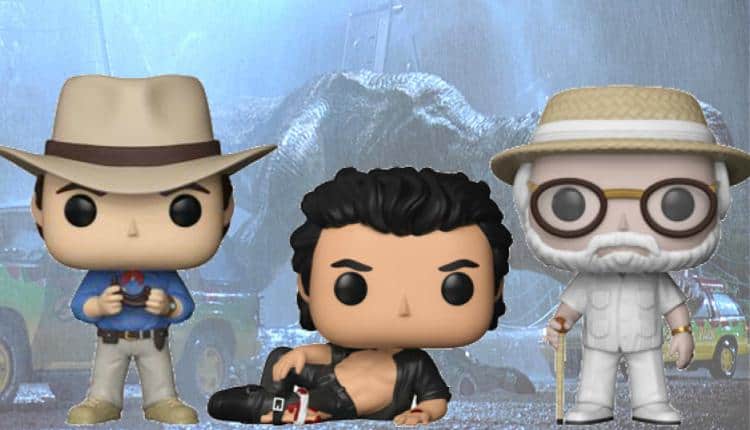 As usual, all are beautifully detailed, Hammond even has the pockets on his shirt and the gold watch he wears during the movie. Dr. Malcom has his “rock star” look with a leather jacket and dark sunglasses. Nedry is in the same outfit he was in before he died, that awful yellow raincoat. He is also holding the can of shaving cream meant to transport the embryos.

The Dilophosaurus has one special edition, a 1-in-6 rarity, that has its bright colorful frill on display, ready to attack the threat of Nedry. This edition is not exclusive to any stories. However, the two pack with the frilled Dilophosaurus and ink-splattered Nedry is exclusive to Entertainment Earth.

The other exclusive edition is found only at Target. It is a rather sexy Jeff Goldblum Funko. He has always been considered the stud of the movie, hence the rather sexy pose despite what was in the movie, a broken leg. Who needs a shirt open to fix a leg wound, we will never know, but here he is abes and all.

Funko Pop! also states that a vinyl figure of Dr. Sattler will be coming soon. That said, these other figures will be available in February.

If you are a fan of Jurassic Park but never quite found the right merchandise to represent your love for the film, Funko Pop! is a well-made and affordable option. Jurassic Park was a ground-breaking film in many ways.

For example, creating how the dinosaurs looked and moved took a great deal of research and consulting with paleontologists in the field. The product of that effort was the first ever association between dinosaurs and birds. Chickens, to be exact, were used to model the way dinosaurs walked and moved.