If sprucing up your home is one of the things atop your New Year’s resolution list, Home Depot has the perfect item for you. Their site is now offering the Nanoleaf Canvas Smarter Kit which looks to be one of the premier customizable smart ligNanoleaf Canvashts on the market. 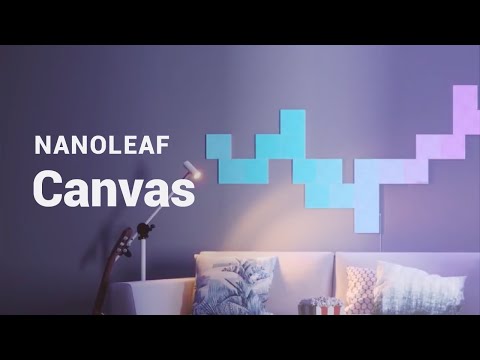 The Nanoleaf Canvas Smarter Kit begins where its predecessor, the Nanoleaf Light Panels, left off. It takes the original’s features, such as modularity, customization and app support, and builds upon them. And since we’re talking about the device’s ability to build via modularity, it’s worth noting that the Nanoleaf Canvas can support up to 1,000 light squares in a single system.

Said system is easily controlled through Wi-Fi within the Nanoleaf Canvas app. And with 16.4 million colors at your disposal, you can truly flex your artistic muscle.

The Nanoleaf Canvas also now incorporates built in rhythm technology. Meaning that your lights will react in real time to the music that you’re listening too. The light squares are also touch enabled, allowing you to trigger programmed effects with a simple press.

Each light square is 6 inches by 6 inches, so it won’t take many to fill up any given space. The Nanoleaf Canvas Smarter Kit comes with 9 light square in the package. And Nanoleaf states they each have roughly a 25,000 hour life span.

Home Depot has the Nanoleaf Canvas Smart Kit listed for $248 with free shipping included. So you’re not going to break the bank upon making a radical upgrade to your home. The Nanoleaf Canvas is also compatible with Apple HomeKit, Amazon Alexa, IFTTT and Google Assistant, meaning you should be good to go with whatever smart home device you’re using to control your home.

Checkout Nanoleaf’s video above breaking down their Nanoleaf Canvas abilities. It’s truly an impressive way to add some functional and gorgeous flair to your walls.