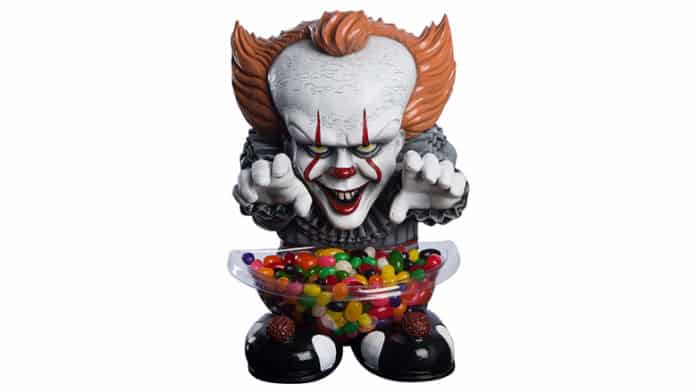 Can you smell the circus? There’s peanuts, hot dogs, and a dish full of your favorite candies. Unfortunately, to get a hand full of these delectable treats, you’ll have to make it past the shapeshifting clown, Pennywise.

Straight from the sewers – and your nightmares – Pennywise rises to keep a close eye on a dish full of candy with the official Pennywise Candy Bowl – perfect for your next Halloween party. The 15” foam bowl holder is modeled after the 2017 design from Andres Muschietti’s “It.” Every creepy detail of Bill Skarsgard’s interpretation of the classic Stephen King character is represented in surprising detail. From the orange hair to the poms of his shoes, the It Pennywise candy dish is a cartoonish replica of the horror movie villain.

Don’t let his clown shoes and harmless-looking clown makeup shown on this Pennywise candy bowl fool you. Pennywise has been terrorizing Derry for centuries. This licensed candy dish just gives him the ability to expand his reign of terror. With him in your house, ominously hovering over the 4” bowl of candy, you can expect to see some truly strange things. Maybe it won’t be a leper or a mummy or a creepy dad, but you’ll find something horrendous stalking you in the halls.

The It Pennywise Candy Bowl is the perfect deterrent for those pesky hands that like to dig into your favorite candy. Even the biggest candy connoisseur will hesitate before taking a handful of candy.

Do you have the guys to go up against Pennywise just for the sake of enjoying candy? Legend has it that those that did approach the officially licensed candy bowl holder have vanished, just like the children of Derry, gone without a trace. Follow in their bravery or answer the calls of the dancing clown and you may just find that it’s not the balloons that float in Pennywise’s world. It’s his victims. Available now from HalloweenCostumes.com.