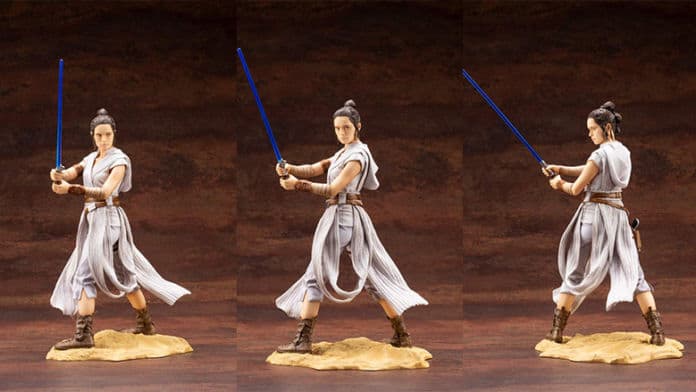 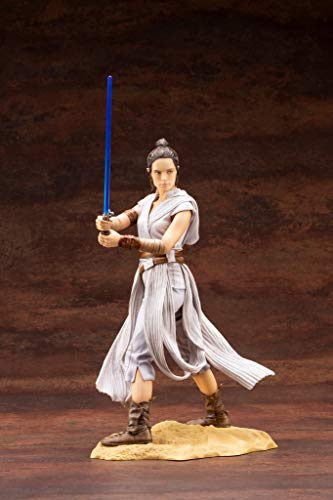 But wait! Skywalker’s lightsaber was destroyed in The Last Jedi, you may say to yourself. Clearly, we’re in minor spoiler territory as it’s fully restored in a piece attached to the thrilling conclusion to the Skywalker saga – The Rise of Skywalker.

The detailed Star Wars statue features the heroic Rey standing atop a base of sand. At her side is a blaster that is surely going to come in handy at some point along her journey. Her hair and outfit are pulled from her costume seen in The Rise of Skywalker.

Rey is positioned to strike down her enemy, but who that may be remains a mystery until the movie’s release. Is it the conflicted Kylo Ren, her potential love interest who can’t decide between the Light and Dark Side of the Force? Or is there a greater threat emerging from the darkest depths of the Star Wars universe?

Whoever it is, Rey is surely ready to bring them down. And that stoic look is not one of someone that’s playing around. After perfecting her skills with the lightsaber, she’ll take no time to cut through her foe. Unless it is Kylo, who she shares a complicated relationship with.

This Rey statue stands approximately 11.5”-tall and is the perfect desktop piece for any Star Wars fan. Start or complete your The Rise of Skywalker collection with this ARTFX statue. Perfected by the masterful team behind ARTFX’s high-quality work, the statue is everything any fan of the new trilogy needs.

Pair it with The Rise of Skywalker Kylo Ren ARTFX statue for a display piece that is sure to be the center of attention in your Star Wars collection.