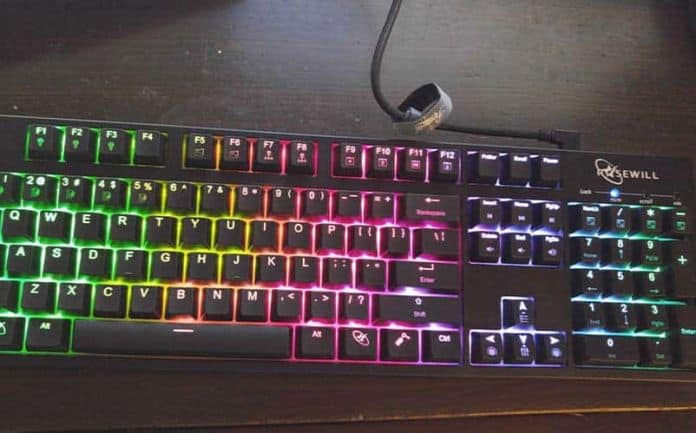 Rosewill has been making keyboards for quite sometime, so it’s safe to say they know a thing or two about design by now. With the Rosewill RK-9000V2 RGB keyboard, the second generation of the RK-9K series, it’s clear that the company’s design focus was on perfecting the basics of a gaming mechanical keyboard without going over-the-top with too many bells and whistles.

At first glance, it looks like a very basic, standard keyboard you’d find at a big box retailer for under $40, and that’s this keyboard’s biggest flaw; without the lights on, it looks quite unimpressive. But when you plug it in, the keyboard comes to life in a variety of ways, and you can tailor its backlighting to your specific tastes.

Rosewill’s RK-9000V2 has quite a few different lighting options, and they all look pretty cool. There are eight in total, including: 100% backlit, Wave, Rain Drops, Trigger, Flashing, Bump, Backlit off, and Color Fading.

Each has their own cool effect, and you can set up your keyboard to display in your favorite colors with ease (using the FN key and pressing any of the necessary keys). On top of this, you can also control the speed at which the lights move for the different movement modes.

For example, when using the Wave display mode, you can have the wave move slowly away from where you type, or you can have it move at a rapid speed.

Typing on the RK-9000V2 RGB gives a satisfying crunch, thanks to its Cherry MX Brown switches. It’s not as rigid with its typing as say, my Cougar 700K with Red Switches, but it’s definitely super close, and we’d have to imagine that the RK-9000V2 RGB with red switches feels virtually identical.

As far as gaming with the RK-9000V2 RGB keyboard with brown switches is concerned, the keyboard was responsive and we didn’t bottom out at all. What’s more, it’s not nearly as loud as my Cougar 700K with its red keys. So for that, my wife thanks you, Rosewill.

Build quality is top-notch, and the keyboard’s legs are noticeably sturdier than your average keyboard. Even when pushing the keyboard away from your body, the legs don’t flip down.

I’ll also note that it includes a Windows lock key, so that when you’re in the heat of battle you don’t accidentally slip and hit the windows key.

One of the RK-9000V2 RGB’s minor annoyances is the cord placement, which, for some reason, sits at the far right side of the keyboard as opposed to the center. It’s not a dealbreaker by any means, but it’s noticeable for those who like to have their keyboard slightly angled to the left while typing.

The RK-9000V2 RGB also has profile capabilities, allowing users to create up to five different profiles with different Macro Key features and LED color profiles. Recording macros is easy, and there are step-by-step instructions included in the little booklet that comes in the box.

This is especially useful for MMO players, although I can see its uses with games like Overwatch (you could set up a macro for Lucio to continually spam his two main abilities so healing is always at a max). The keyboard can store up to 50 macros in its memory bank, and accessing them is as easy as pressing a few keystrokes.

The RK-9000V2 RGB’s quality is immediately noticeable when you pull it out of the box, thanks to that surprising weight and hard plastic shell that makes it feel durable.

Once plugged in, the colorful display is more than enough to satisfy any gamer’s customization needs. Sitting at $119.99 on Amazon right now (20% off its MSRP), it’s definitely an attractive option that’s worth the price tag.

-Cord Placement
-Plain-looking When Off