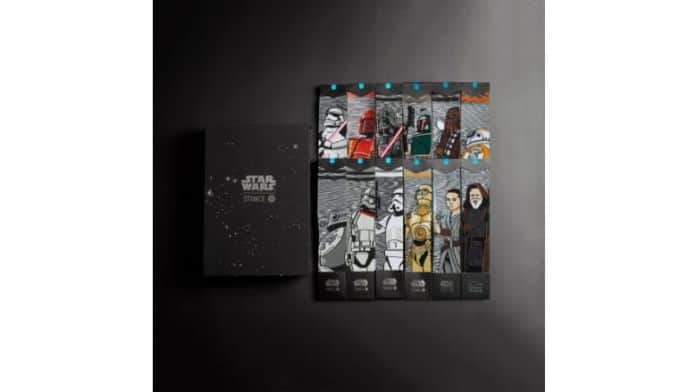 If you’re looking for some epically nerdy clothing that doesn’t shout your fandom from afar, then Stance’s line of Star Wars socks should perfectly fit the bill. The site features close to 50 unique designs, all of which are of course inspired by the Star Wars universe. And all of them are equally awesome.

Stance’s Star Wars socks has some new additions to the group. There’s the Warped Pilot pair which displays a Rogue Squadron fighter on one side and a Tie Fighter pilot on the other. There’s also Warped R2D2 which sports R2D2, C-3PO and Darth Vader in a 360 degree design.

The Warped Boba is another 360 degree design showing Boba Fett alongside a Carbonite frozen Han Solo with Cloud City looming in the background. And the Warped Chewbacca design goes all the way around your lower extremity too with a design depicting Chewbacca and a couple of Stormtroopers.

The new single pair designs are running for $18. But there are plenty of other Star Wars sock designs at Stance too, many of which are available in $50 3 packs. There’s a Droid Pack which hosts a couple of rolling droids in addition to BB-8. The A New Hope 3 pack features Luke Skywalker in his orange pilot outfit on one pair, with the other 2 hosting R2D2 and a Tie Fighter pilot.

The Rogue One 3 pack features a Death Trooper, Stormtrooper and Krennic. While The Empire Strikes Back 3 pack has designs based on Hoth’s Luke Skywalker, a Wampa and a Snow Trooper.

Finally, The Force 3 set is also $280 for 12 pairs. These include more realistic depictions of a Storm Trooper, a Praetorian Guard, Darth Vader, Boba Fett, Chewbacca, BB-8, a Protocol Droid, Captain Phasma, another Trooper, C-3P0, Rey and the older Luke Skywalker from The Last Jedi.

Both of the 12 pack Collector Sets come with a gorgeous box to help justify the heavy price. All of Stance’s Star Wars socks are Crew length in height, and feature a thin to medium thickness Stance classifies as a lightweight and breathable close fit.

Stance’s Star Wars socks are all made of cotton with a tight 200 needle count stitch. There’s a Terry Loop in the forefoot, heel and toe for comfort, and a seamless Toe Closure. It truly is an impressive line. You can check them all out right here.

Previous article
Deadpool Christmas Sweater is as Hideous as the Hero Himself
Next article
Christmas Memes 2018: The Ultimate List of Best Xmas Memes