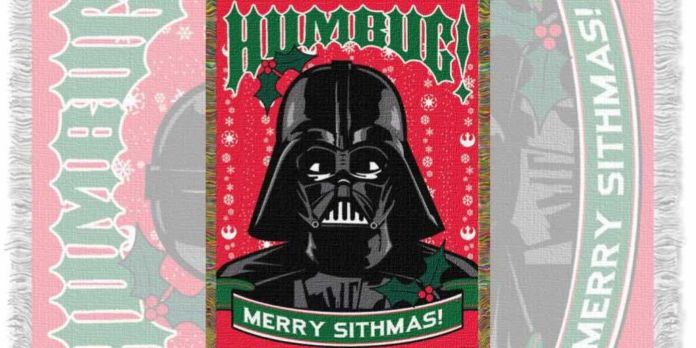 This Star Wars Darth Vader throw comes from Wayfair and would go perfectly with all the rest of your nerdy decorations. It’s about 60″ long and 48″ wide and has the large head of Darth Vader himself taking up most of the throw. 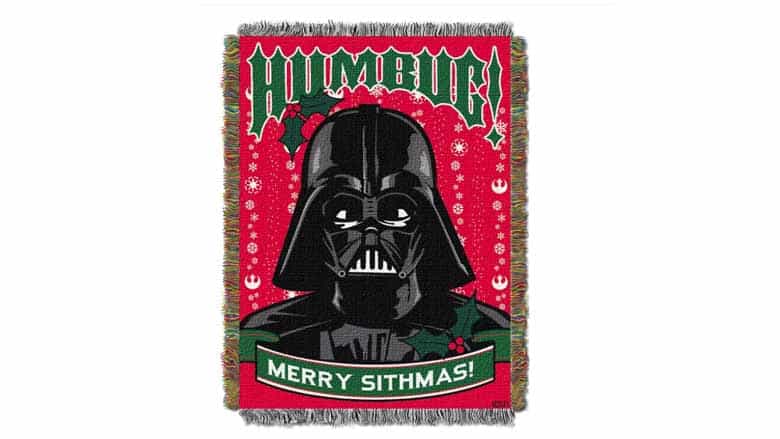 His face is in an almost comic book style, with the entire front of the throw very textured. It’s clearly a printed image, but set into the fabric in a way that isn’t overly plastic and uncomfortable.

At the top is the word “Humbug!” in what I can only describe as the Christmas version of the Old English font. The letters are in green and accented with two holly leaves and berries.

The background behind the Emperor is bright red with white snowflakes and the occasional Empire symbol. At the bottom of the throw are the white letters “Merry Sithmas!” on a green banner, again with a holly sprig on the side.

The throw is made entirely of polyester and completely machine washable, so don’t worry about ruining the image by sticking it in the dryer. This throw may not be as fluffy as one might hope, but there is a lovely fringe along each edge for that extra level of comfort.

Priced at $56.99 USD, this throw is actually reasonably priced compared the most other more common throws sold during the holidays. Besides, this one is themed after Star Wars and nothing gets better than that. We all know Darth Vader wouldn’t approve very much of Christmas, so the proclamation of humbug! seems only fitting.

The pun on merry Christmas is both cheeky and sweet, something any true nerd can go around saying instead. People either won’t notice, be a little confused, or laugh and return the favor. Nonetheless, this throw would compliment any nerdy household and well suited for your next Star Wars marathon.