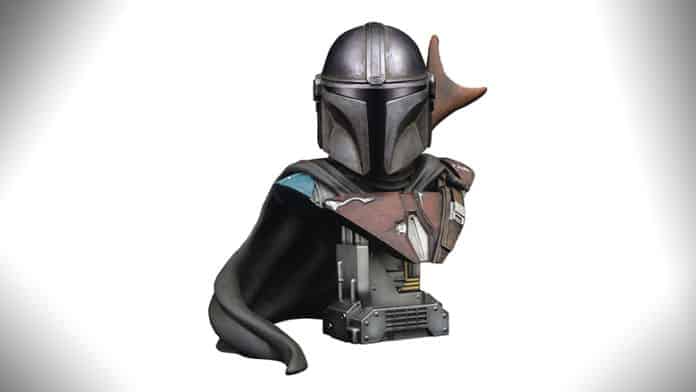 Pedro Pascal may fulfill the role of the bounty hunter in the wildly popular series, but this bust doesn’t need a charismatic actor to appeal to Star Wars fans. The Legends bust is a half-scale resin bust measuring 10” tall without sacrificing on the finer details.

The Mandalorian’s armor sports incredible detailing as if it has suffered through the trials and tribulations as the titular character. Dirt and scuff marks tone down the sheen of the bounty hunter’s helmet while scorches and burns are visible on the chest armor. It’s clear the Mandalorian has been through a lot, and we know things are only going to get tougher for him.

Sorry, fans! There’s no “baby Yoda” joining him on this display, but the accuracy of the bust makes it easy to forget. The Mandalorian 1:2 scale bust features a resin cape that completes the screen-accurate design.

The 3D bust is scheduled to release in June 2020 and is limited to only 1,000 pieces, each packaged with a numbered certificate of authenticity. A statue like this is sure to drive the Star Wars community wild, especially as they’re trying to fill the void after finishing the first season of The Mandalorian.

Ease the pain of waiting for season 2 by adding this bust of The Mandalorian to your Star Wars collection. He’ll fit in right next to your shrine to Boba Fett. Relive the adventures of The Mandalorian, Star Wars’ popular space Western, with this limited edition 1:2 scale bust.