Nerd Much?
Home Movies A Crash Course in Horror Movies: The Babadook Review 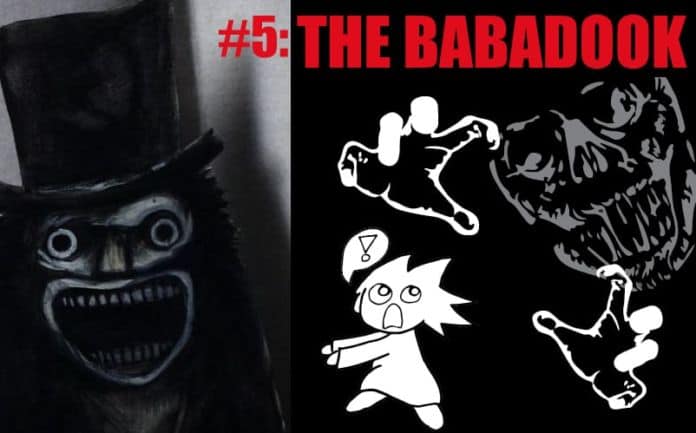 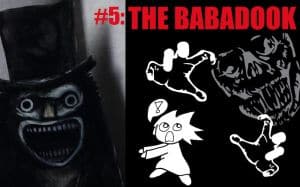 This week I learned that Australians have figured out a way to channel all of the fear that comes from living in a country where everything wants to kill you and put it straight into a movie so we can all know what true fear feels like.

Released in 2014, The Babadook already seems to be unbelievably popular among horror fans. So I know that most hardcore horror fans will have seen it already, but I’m going to avoid anything beyond minor spoilers because it is such a new film.

It’s the story of a mother and her son, almost 7 years after a car crash that killed the boy’s father. The film very quickly establishes that it’s going to be all about grief, and it doesn’t hold back at all. Every horror film I’ve watched so far has taken the time to establish the idyllic, happy life that the monster or villain of the film destroys. There is no happy life for Amelia (Essie Davis) and Samuel (Noah Wiseman).

Samuel has terrible behavioral problems, and keeps building weapons and misbehaving at school because he claims that monsters are coming to get him. Amelia is completely unequipped to deal with this, because she’s still in deep grief for her husband and seems to be experiencing a severe depression. She tries to reassure Samuel that there are no monsters, but he seems unconvinced.

Things are going wrong for the pair of them even before the movie’s titular monster shows up. Amelia’s sister Claire (Hayley McElhinney) is getting increasingly uncomfortable with Samuel’s behavior, and Amelia and Samuel both suffer from insomnia and nightmares. Then, Samuel picks out a book for his mother to read to him as a bedtime story, a pop-up book called Mister Babadook. Amelia doesn’t remember getting Samuel the book, but starts reading it anyway.

A lot of children’s books are kind of unsettling, but this one rightfully sends Samuel into a panic.

From then on, Samuel and Amelia are both haunted by the Babadook, which sends their lives into chaos. The film keeps you guessing about what will happen next and never telegraphs its intentions too much. It trusts its audience to come to their own conclusions.

The unpredictability of The Babadook contributes to this being the most scary horror movie I’ve watched so far. I wasn’t sure if any of the characters would survive the film and would cringe in fear every time the action ramped up. But the atmosphere of this film is so unpleasant and foreboding that I spent the whole movie on edge, meaning that I didn’t get the same adrenaline rush I had when the villains would appear in Psycho or Halloween. I found the oppressive atmosphere way scarier, but if you prefer a horror film with good jump scares, this probably won’t be as exciting for you.

I’m starting to feel like a broken record, saying it every time, but horror is obviously a genre that allows cinematographers to do their best work. This film is beautiful! The lighting and camera angles are used to highlight the drab, depressing nature of Amelia and Samuel’s life as well as the terror of the Babadook. Amelia is frequently shot as close up as possible just to show off the haggard look on her face. My only criticism would be that the film sometimes feels like it’s trying to be too artistic with its framing — which feels completely at odds with the gritty feeling the rest of the film is trying to get across.

Jennifer Kent wrote and directed the film and I’m really excited to see what she does next. She gets great performances out of every actor, including Noah Wiseman. I was extremely impressed, because Wiseman is only 6 or 7 years old and was asked to carry a lot of the film. Other than one or two scenes I found him completely believable, and honestly started to wonder if he’d encountered a monster before.

The dialogue in this film is well-written, which probably didn’t hurt. In fact, the film is quite well written overall. The way that it confronts the issue of grief is oddly sweet, considering the horrible things that happen in the film. Amelia and Samuel’s dialogue is very realistic, and the writing makes it clear even before it’s stated outright that Amelia is still grieving her husband. The symbolism between the monster and her grief isn’t subtle whatsoever, and the concept doesn’t really feel unique, but I don’t think it had to be. I see this film as a modern fairy tale which is trying to teach us how to cope with loss. It’s the most spine-chilling therapy session ever.

I would recommend that every horror fan watch The Babadook. It’s got a good story and is SO SCARY. For those of you who try to avoid movies that will make you scared of the dark, skip this one. It was definitely more eerie than anything I would have chosen to watch before I took on this project. The entire point of A Crash Course in Horror was exposing myself to horror films in hopes that they would: a) be great movies, and b) terrify me. I guess I can’t complain that I’ve succeeded so incredibly this week, because this one is definitely going to stick with me for a while.

If you’re a sadist who thinks they know an even more bloodcurdling horror movie, comment below with its title — I’ll watch it! I may spend the rest of my life cursing your name, but I will. Don’t forget to come back next Saturday. I’m heading back to the theatre to see a (relatively) new release – Crimson Peak.