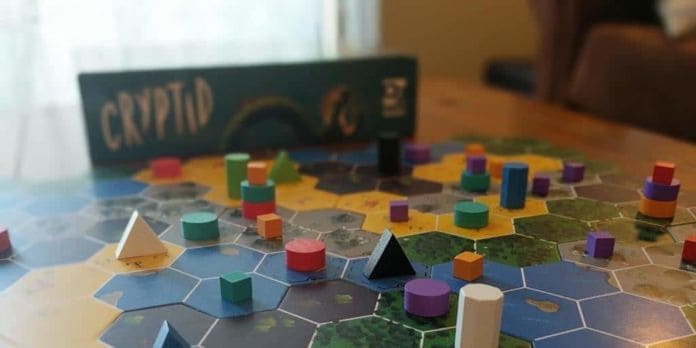 **A review copy was provided by Osprey Games**

First-time designers Hal Duncan and Ruth Veevers have a clever social deduction game that sends you into the wilderness of North America in search of a legendary creature.

In Cryptid, published by Osprey Games, each player is a cryptozoologist in search of an elusive creature. Everyone wants to be the one to make the discovery, and everyone has a different piece of key information about the cryptid’s whereabouts.

This pure deduction game is a competitive race to gather the key information to identify the single viable habitat on the board. The modular board features animal territories, structures, and five types of terrain. There are 54 setups represented by a deck of cards, each of which offers different puzzle for the three player counts. There are setups for regular play and advanced play—and the advanced mode isn’t messing around. The rulebook refers to a companion “app” that is really just a website, but the website is easy to use and appears to offer 200 total setups, far more than the included 54-card deck.

Each player’s clue refers to a terrain, animal territory, or structure and the proximity to possible habitats. A clue could say that the habitat is or isn’t within two spaces of bear territory, or that it’s on either a swamp or mountain space. No single clue gives you anywhere enough information to make an informed guess. In fact, you’ll need every player’s clue in the round, because the combined information from these clues refers to one, and only one, cryptid habitat. 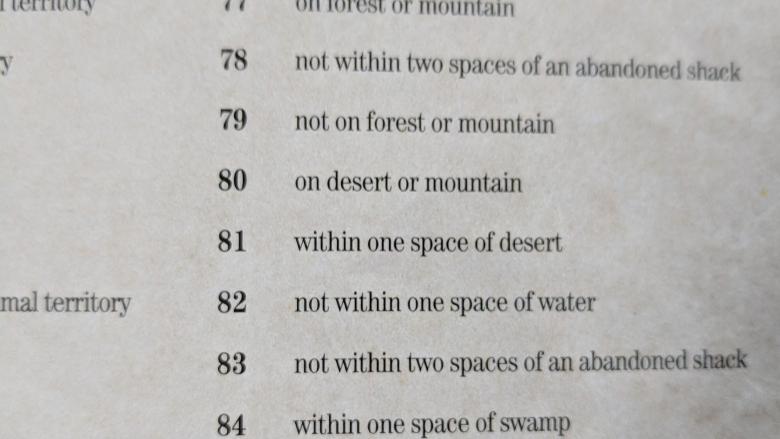 This impressive mathematical feat only adds to the satisfying moment of victory (though I’ve never experienced it firsthand, I’ve witnessed it) and feels a bit magical. Once all clues are known, finding the correct space takes seconds. And with 108 spaces on the board, it is extremely unlikely that a player finds the space on a fluke.

A player’s turn consists of one of two actions: questioning another player about whether a space fits their clue, or searching a space for the habitat. When a player is asked whether a space fits their clue, they respond by placing either a cube (indicating that it could not be the habitat according to their clue) or a disc (indicating that it is a possible habitat according to their clue). Any time one player causes another player to place a cube, the active player must place a cube as well, giving the table a bit more information. Everyone has their set of discs and cubes in their color, which allows players to review revealed information easily by studying the board.

Searching a space is always exciting. A player begins by placing one of their discs on a space, since you can only search spaces that fit your clue. Then, the player to their left places either a disc or a cube. If they placed a disc, it’s up to the next player to place a cube or a disc, and so on. If everyone places a disc, then the searching player has found the single space on the board that fits everyone’s clue, and they win the game. Players often share their guesses to each other’s clues to see how much they deduced, even if they didn’t win.

There are only two differences between the normal and advanced modes. In advanced mode, which uses its own deck of setup cards, clues could be positive or negative; e.g. “The habitat is not on a forest space.” In addition, more structures are present on the board.

In my overconfidence as an experienced gamer, I played the advanced game first with my group, expecting the normal game to be a watered-down version that I would try later. This is not the case. The advanced game is hard, and the negative clues really increase the already hefty mental load required by this game. We did not succeed in finding the Cryptid, even after the group opted to reveal that round’s hint.

The Normal mode is just that: normal. It’s not a family version or a basic game, it’s the experience that most players will find enjoyable. In fact, I find it hard to imagine that my group will ever prefer the Advanced mode. The Normal game provides a satisfying puzzle that doesn’t feel like it’s missing anything. However, it’s nice to have the option of an advanced game in case we ever become extremely confident in our creature-locating abilities. As I said before, I haven’t won yet after several plays, so this day is a long way off.

The rulebook recommends each player use pencil and paper to take notes, and while some players fared well without taking notes, most of us found pencil and paper necessary to the experience. This game is tough, and I expect younger players would struggle with its puzzle. In my first two games, I didn’t succeed in figuring out anyone’s clues, though I had some guesses. This is not a game for everyone, and if you know you don’t enjoy logic puzzles or deduction, you should steer clear. It’s also a game you won’t want to play when you’re tired or otherwise impaired.

That being said, I have enjoyed myself in every play, despite my impressive losing streak. That’s because there are little victories throughout the game. On a few occasions, I managed to piece together everyone’s exact clues, but someone else beat me to the punch and found the habitat first. I also enjoyed throwing players off the trail of my own clue.

There are really two puzzles within this game: deducing other players’ clues and concealing your own. There is a definite strategy to placing your cubes (on your turn, when you can choose their placement) to indicate invalid spaces, and the more a group plays Cryptid, the more interesting this strategy becomes as players become familiar with the clues.

Like most deduction games, Cryptid relies not only on honesty but also on players making no mistakes about their clues. We have played a few rounds where someone misread their clue, resulting in multiple possible habitats instead of just one. It doesn’t ruin the round, but it usually means it ends early. Setup is quick and the game typically plays within 45 minutes, so the solution is almost always to play another round. In fact, it’s hard to play just one game of Cryptid, especially when you lost the previous one.

Though the experience doesn’t change drastically from round to round, the low-luck nature of the game and the consistent excitement of searching a space make Cryptid a clever and rewarding deduction game that’s enjoyable whether you win or lose.

Cryptid scales well from three to five players and takes roughly the same amount of time, as more players means spaces are eliminated faster. The three-player game allows players to focus on only two clues, which is a bit less taxing. In four- and five-player games, searching is even more suspenseful since there are more players to confirm or eliminate a space. The amount of information on the table can be overwhelming at five, but it’s still manageable. The lack of a two-player game is disappointing, but it probably wouldn’t fit the game’s formula.

One prominent issue is the color of player pieces. There are two blue and tealish colors that I had difficulty telling apart as a colorblind person, and many non-colorblind people struggled with these colors as well. It always perplexes me when a game was not tested for colorblindness issues. It isn’t hard to do, and it’s one of the main accessibility issues with board games in general that most modern games solve easily with bold and varied palettes. 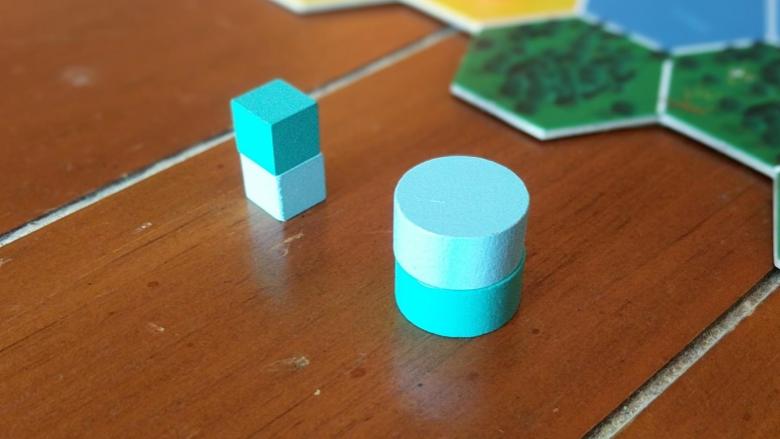 Another problem is the shortage of components. In the advanced game, and even the normal game, it’s possible for a player to run out of cubes. The rules make no comment on running out of cubes. When we start running low, we have resorted to revealing the round’s hint. And when we do run out, we shrug and declare the round a loss for all players.

When it comes to graphic design and readability, this game nails it. The only text in the game is your single-sentence clue, and there’s no heavy iconography, aside from the color-coded bear and cougar territories. The rule book is wordy, but it’s fairly brief considering the number of important concepts. 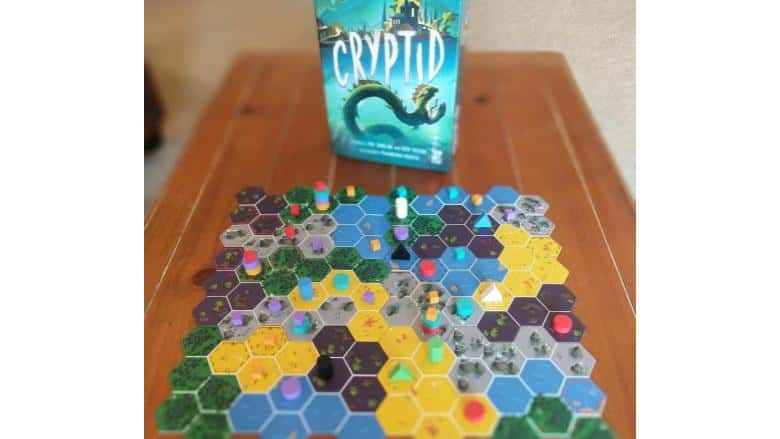 As always, Kwanchai Moriya’s artwork shines and adds character to a game that could almost be abstract. The board is colorful and clean, and the total lack of text make it attractive on the table. Combine this with chunky wooden components that are easy to pick up and you have a flashy and functional game.

The small issues aren’t enough to really hurt the overall experience of Cryptid. The game becomes more fun as everyone wraps their head around the clues, and I found myself doing a bit better each round, even if I’m slightly bitter about my lack of a victory. The game shines in its gameplay, artwork, and overall clever design. It might not be a game everyone’s always in the mood for, but it’s bound to hit my table again and again. This is a great debut from design duo Hal Duncan and Ruth Veevers, and hopefully we see another game from them sometime soon.