Every so often, we come across a game that checks all of the right boxes. Sci-fi? Check. Drones? Check. Multiplayer? Check. This evening, we were sent an interesting announcement trailer for a game called D.R.O.N.E., and now we want to play nothing else in this world.

The game is currently in development by a team of five independent devs, which they’ve rightfully congregated under the name Five Studios Interactive. It’s a sci-fi multiplayer arena shooter with an emphasis on creative freedom, allowing players to not only craft their own badass drones but also levels. Players are able to build a variety of drone types, including drones for flying, swimming, diving, driving, jumping, and more. The devs note that you’re able to create hybrid drones as well, and that different sizes will result in different maneuverability; smaller drones are agile while bigger drones that are heavily armored cannot move as easily. As players progress in the the game, they’ll gain access to more components and they can build more complex drones.

As far as arenas are concerned, players will be able to build complex arenas and define their own rule sets. As is the case with drone-building components, players are able to add complexity to their designs and rulesets as they progress.

D.R.O.N.E. will come with templates for common game types like Deathmatch, Capture the Flag, Racing, and more. In these modes, players will be able to compete in high-octane multiplayer matches against other players in arenas. Competing can be done in teams or against each other.

The devs say that the game is heavily inspired by some of the most notable PC games of the 90s, including Unreal Tournament, Quake 3 Arena, X-Wing and Tie Fighter, and MechWarrior Online (it’s as if they’ve taken every game I put 100+ hours into as a kid and thought of ways to incorporate some of the best mechanics). The most immediately noticeable influence is X-Wing and Tie Fighter, as in the trailer, you see those types of Star Wars sequences we’ve seen so many times before. 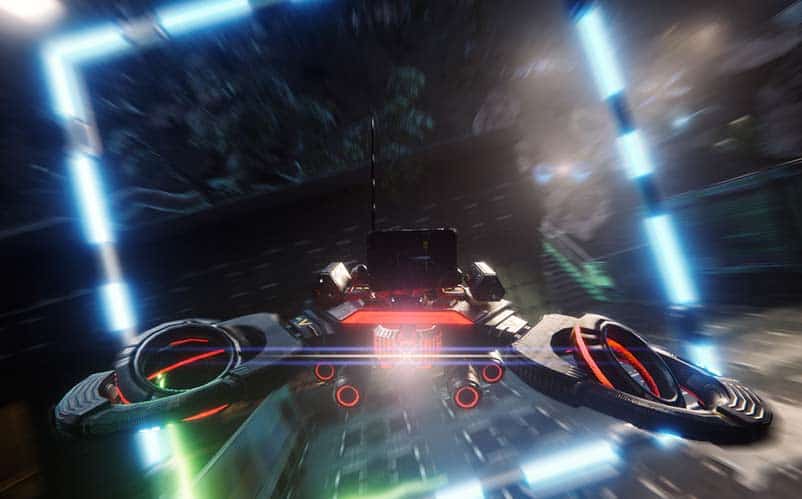 I should also note that the footage shown above is all in-game rendered, and it looks absolutely stunning. Gameplay appears to run at 60fps and in 1440p, environments look beautiful, and the drones look imaginative and futuristic. There’s an apparent emphasis on cool lighting as well, and for anyone who has followed the Drone Racing League, the general aesthetic will look familiar enough.

D.R.O.N.E. is in its early stages, but what is being shown so far looks incredible. It has been in development since spring 2015, and they have a lot of the core mechanics and ideas nailed down firmly, it appears. Unfortunately, we can’t get our hands on it just yet to see if that rings true. But for now, we figure it’s worth pointing a finger at for you all to check out. We’re told it’ll soon hit Steam Greenlight and there will soon be a crowdfunded campaign.

If you want to know more, check out the official site.