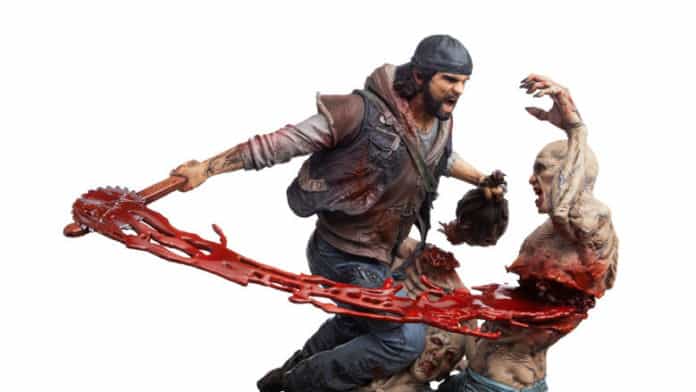 Bend Studios’ Days Gone wasn’t for everyone. But those that enjoy the team’s freaker filled world seem to really dig it. And for that group of folks GameStop has just announced something special. A beautifully sculpted Days Gone statue that features the main character Deacon taking out a group of the game’s freakers.

The Days Gone statue was designed by the title’s Lead Character Artist, Greg Callahan. Callahan vision sees Deacon wielding a saw blade to dispatch a trio of freakers. One he decapitates completely. Another he severs through its ribs, casting a flood of blood in its wake which really gives that statue style. The third freaker is begin bowled over by Deacon as the character drill a knee into its skull.

GameStop’s Days Gone statue is comprised of high quality Polystone. It measures in at 15 inches tall, so it’ll hold its own on your mantle. Due to its high quality and size – and general badassness – it’s listing for $379.99.

If you’re one of the folks that are still enjoying adventuring through the post-apocalyptic Oregon featured in the game, this Days Gone statue is likely right up your alley. And you can brandish the stylish souvenir right alongside your television while experiencing the post-launch DLC that’s coming our way next month.

Sony and Bend Studios confirmed the upcoming DLC will be free of charge and arrives sometime in June. There will be weekly updates which will add a new Survival difficulty, a new bike, a new horde and combat challenge. And likely, some fresh updates to the game itself as the team at Bend continues to smooth out the various hitches we’ve seen since launch.

You can find the Days Gone statue over at GameStop’s site via this handy link here. GameStop offers free shipping on all orders over $50, so that’s a given due to the Days Gone statue’s sticker price. It officially releases on July 15th, but if you dig it, we’d recommend getting your preorder in now.