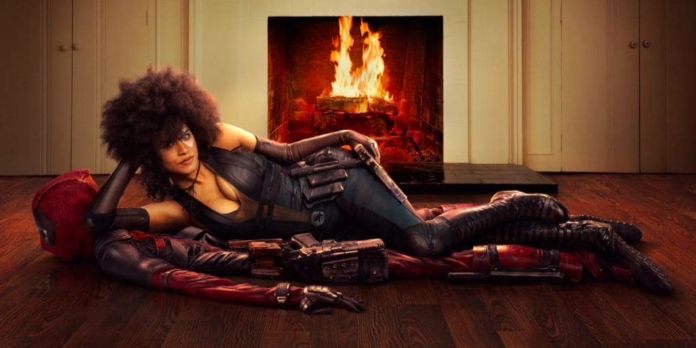 The star of the first Deadpool movie, clearly still riding on the success of that movie, has posted on Twitter an image of Zazie Beetz in full costume as Domino. The fireplace is a background you may remember from one of the many promotional images of the first Deadpool movie. In case you weren’t sure Deadpool 2 was going to be the sequel, Domino is posed the same way as well. Though instead of a lovely bear fur rug, she’s lying on a Deadpool rug. He looks particularly squishy today, I’m sure that’s doing wonders for her back. As Reynolds says in the tweet “some people just know how to work a red carpet.” 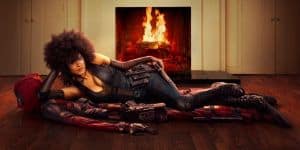 Domino is a reoccurring character in the Deadpool comic series. She is a mutant mercenary much like Deadpool himself, though they don’t always get along very well.

Domino doesn’t tolerate Deadpool’s antics very well, especially his tendency to flirt with anything that moves regardless of the gender. Or his cavalier attitude during combat, where she’s usually kicking ass and Deadpool is sometimes preoccupied with things like a phone call, or a video game. Domino is definitely more the no-nonsense type and Deadpool simply isn’t that at all.

Her appearance is a little different, but it is certainly for the best. In the comics, Domino has most of her face painted white, and a black patch over one eye. Beetz’ version is more subtle, with only a white patch over one eye instead, obviously in tasteful contrast to her skin.

Next up will likely be Josh Brolin as Cable and we’ll lucky enough to see him rocking the red carpet too. I mean, every actor has to at some point, right? Deadpool probably won’t mind as long as he gets to crack some jokes at the same time.

Previous articleDragon Quest XI Release Date 2018
Next articleOverwatch League: How Do You Properly Name Pro eSports Teams?
Rhys Pugatschew
Rhys found his love of gaming in Zelda and expanded to almost all genres. He will be bringing you the latest news in the industry. He has worked for ZeldaInformer and CheatCC, happily writing his opinions for all see!