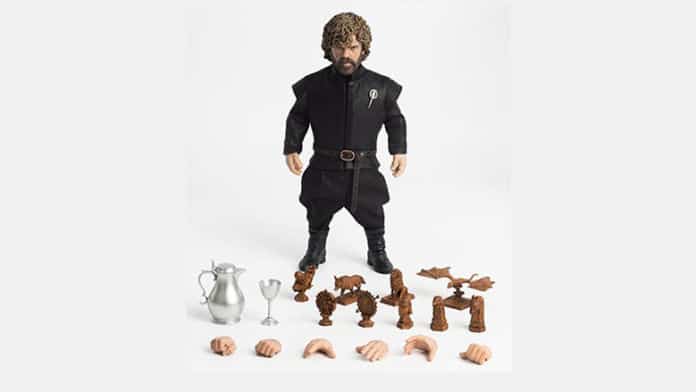 Bring home the greatest mind and the quickest whit of Westeros with this Game of Thrones Tyrion Lannister deluxe action figure. The 1:6 scaled figure is designed after Tyrion’s appearance in Season 7, after his long journey to Esos puts him in the company of Daenerys Targaryen as her Hand.

The scaled action figure, which stands 8 ¾” tall, features a Hand of the Queen brooch, four interchangeable hands, and Tyrion’s absolute favorite – a carafe of wine and a glass to drink it from. The figure also comes with nine map markers that represent the many houses of Westeros. Clearly, Tyrion has some planning to finish with his markers, as Daenerys determines her path to conquer the seven kingdoms of Westeros.

Tyrion comes to life in this heavily detailed figure. From his curly hair to the stoic scowl on his face, there is no mistaking this figure as anyone but the talented Peter Dinklage. Unlike season 8 of Game of Thrones, there are no disappointing surprises with this deluxe action figure. The tailored and fabric vest, trousers, belt, and boots fit perfectly and don’t have that oversized look that action figure apparel tends to have.

Were you displeased with the finale of Game of Thrones? This season 7 figure is the first step in creating your own ending to HBO’s popular series. With the included map markers, plan your own conquest of Westeros or plan out your defenses for when the White Walkers trek south. Whatever your decision, be sure to wash it down with a swig from Tyrion’s goblet.

There is much you can do with the 1:6 scale deluxe action figure of Tyrion Lannister, but you could also just put him on display with any other Game of Thrones merchandise and action figures you may have.

Check out more cool nerdy expensive stuff to blow your money on.

Previous articleGlow-in-the-Dark Slimer Candy Dish
Next article19 Nerdy Tree Toppers for Christmas (2020)
Bobby Bernstein
Bobby is the co-owner of Nerd Much?. Bylines at Heavy, Den of Geek, HiConsumption, and More! Like his nerdtastic tweets by following @Thirstiestgamer on Twitter..