Bandai Namco has revealed that new characters will be added to the Dragon Ball Fighterz base roster. These include Beerus, Hit, and Goku Black. Beerus comes with his super move, called “God of Destruction’s Judgement” and his unique lack of blind spots. There’s no surprising Beerus, that’s for sure. He’ll always see you coming. 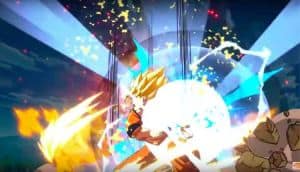 Hit’s super move is called “Death Blow,” but can only be used after a certain amount of time. Meaning it is probably quite the powerful attack with a cool down period. Goku Black’s unique ability is fighting from a distance, as well as Zamasu to help reinforce some of his attacks.

The Shenron System is something that occurs only when the players involved in the fight meet certain combo requirements. At that point, Dragon Balls will show up on the screen and it is up to you to collect as many as possible. Once you’ve got 7 of them, Shenron himself will give you four options that could help you win the fight once and for all.

The game will also feature cinematic reproductions of a few iconic Dragon Ball moments. These are aptly called “Dramatic Scenes” and are only triggered if you meet certain conditions during the fight. Yet another way this amazing game is sure to make you feel like you’re really a part of the Dragon Ball world.

If you can’t wait to play, there will be an open beta coming January 14, 2018 and will run until the next day, January 15. It’s a little short, but if you pre-ordered the game, you can hit the beta even earlier, on January 13. The pre-order will also include SSGSS Goku and SSGSS Vegeta and two exclusive lobby avatars.

The collectors edition is also available for purchase and includes a 7 inch statue of Goku, a steel book for the game itself, and three art boards.