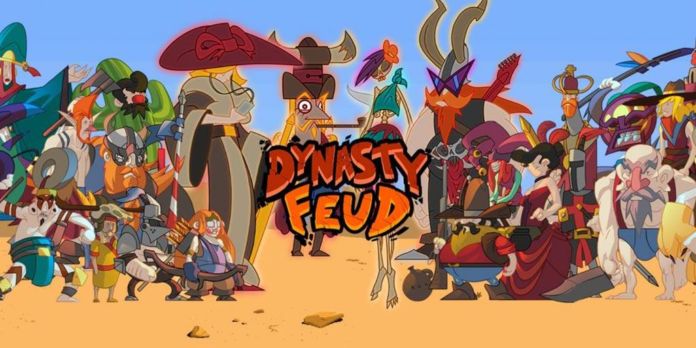 I’m always intrigued when I see some fresh IPs enter into the fighting games space. It seems as though AAA publishers are caught in the same cyclical releases of Street Fighter, Mortal Kombat, King of Fighters, and Smash Bros. While they each have their own flavor, that flavor starts to lose its appeal after awhile, and with each new entry in those series, I get less and less excited. That’s not to say they’re not great games — for the most part, they are — but I’ve been talking about the need for something new in the fighting games genre for quite some time.

Enter Dynasty Feud, a cartoony indie fighting game that released on Steam earlier this month. It’s a competitive platformer-brawler with 2D sprites that’s more akin to Smash Bros. than any of the other fighting game franchises, but at the same time, carves out its own space with some unique ideas — some of which pan out nicely, others, well, not so much.

Most immediately noticeable is Dynasty Feud’s art style, and I’m not even sure how to describe it other than to say that it looks like it was created by a professional MS Paint artist. Maps are the game’s strongest visual elements, each containing a colorful palate. The game’s roster of colorful characters each looks like they were drawn for a Saturday morning cartoon. However, some of the models feel crudely drawn, lacking any visual depth. 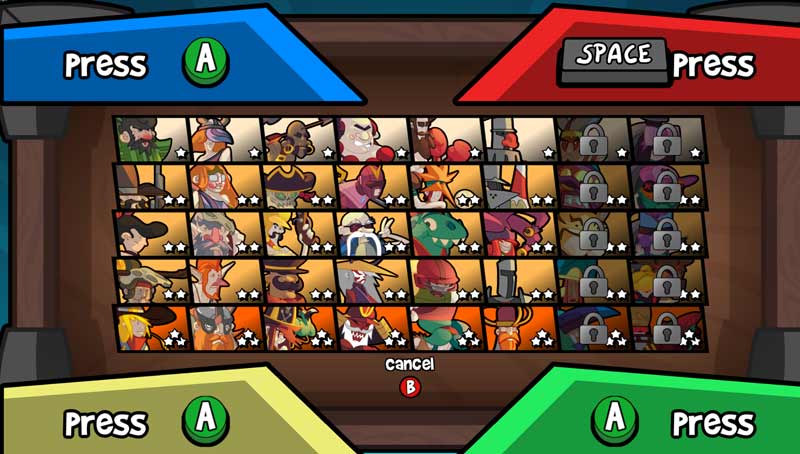 At the start of a match, you’ll choose from eight different dynasties, each of which has their own strengths. For instance, the Yngling clan has a strong melee and effective medium range throws, while the Cartwrongs use guns to attack from long range, making their weakness short range combat. Each dynasty has their own unique flavor, complete with ridiculous back stories you can read up on in the game’s codex. Each dynasty contains five characters, ranging from a skeletal pirate to a Power Ranger knock-off to a dinosaur to a viking, and everything in between. Each of these characters has two unique attacks. Some characters might slash with a sword, shoot with a gun, throw a tomahawk, or fire a crossbow. Character variety is certainly a strength.

Once you’re in a game, you’re tasked with taking down the other family’s five characters in a platforming battle a la Smash Bros. The majority of characters die after being hit once, although some have an extra layer of armor, requiring two hits. The first dynasty to defeat all five of the other dynasty’s characters wins the match.

The dynasty leader of your selected clan also comes into play. When you die, your dynasty leader can “Annoy” the opponent, but more importantly, you’ll also earn a special move as you play that is carried out by your leader. These powerful moves range from a massive electricity attack to a giant ball of yarn that bounces around the map, taking out any opponent in its path.

The maps aren’t just stagnant though, as each has moving parts that make it unique. For example, on one map you’ll hop from train to train as you’re fighting your opponent, while on another, there are numerous levels to the map, with each top level crumbling every so often, reducing the play area. Each of these unique twists on the formula are commendable, and it’s one of Dynasty Feud‘s best ideas. 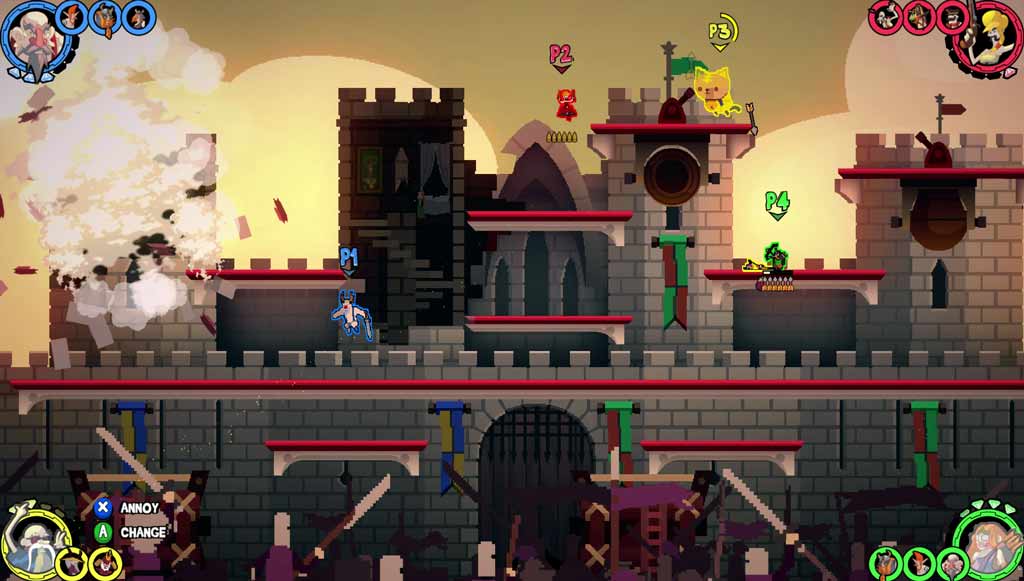 Unfortunately, the idea of having this many characters with unique abilities isn’t as fleshed out as it could and should be. For one, there’s no way to create your own team of five using these characters while battling online. Instead, you’re stuck with whatever dynasty has that character that you want to use. That would be the ideal situation here — where you’d be able to pick and choose characters to create your own team to pit against someone else’s choices online. Instead, you’re stuck with what’s already pre-included in each dynasty. There is a mode in local play that awesomely allows you to do this — and it’s rightfully called “All Star” mode — but that mode is unavailable online. Secondly, those abilities are super limited; there are only two. There are no combos or variations — it’s just those two abilities.

I think that’s Dynasty Feud’s biggest issue is that it doesn’t feel fully fleshed out. There are some good ideas here, but it feels more like laid groundwork than a full game.

Speaking in the most general sense possible, Dynasty Feud is a mixed bag. It certainly has some charm and the concept and maps are good, but it still feels like it’s a game stuck in the conceptual phase, lacking the fully fleshed out ideas that would make it a must-play game.