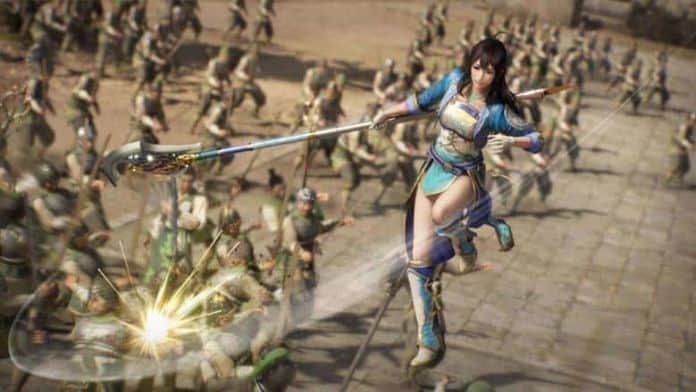 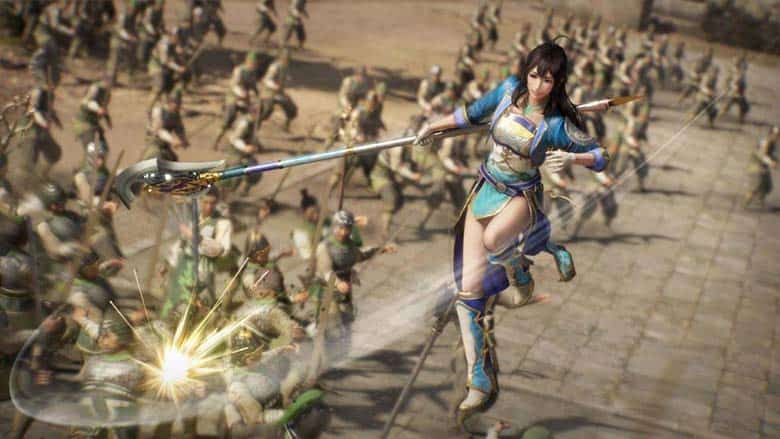 From the moment that I saw the title screen I had an instant flash back to my childhood. It was like I was right in my old bedroom of my parents house sitting on the floor in front of my PlayStation spending countless hours trying to get the highest body count possible.

I remember feeling invincible, almost god-like back then, cutting through endless hordes of enemies like a hot knife through butter. After seeing a few advertisements I was quite excited when I got the chance to review the newest release of the Dynasty Warrior — a franchise that spans over two decades. With all of the promising changes that I had read about, I couldn’t wait to get started and help a dynasty rise to absolute power.

Probably the biggest change for players in Dynasty Warriors 9 is that it’s the first in the franchise to feature an open world. Gone are the days of the loading into scenarios or specific battles that force you to stay within a confining area. You are now placed within a vast version of China which allows you to approach the battlefield in the way of your choosing. Dynasty warriors 9 also boasts a dynamic day/night and weather system which means that both of these change in real time. 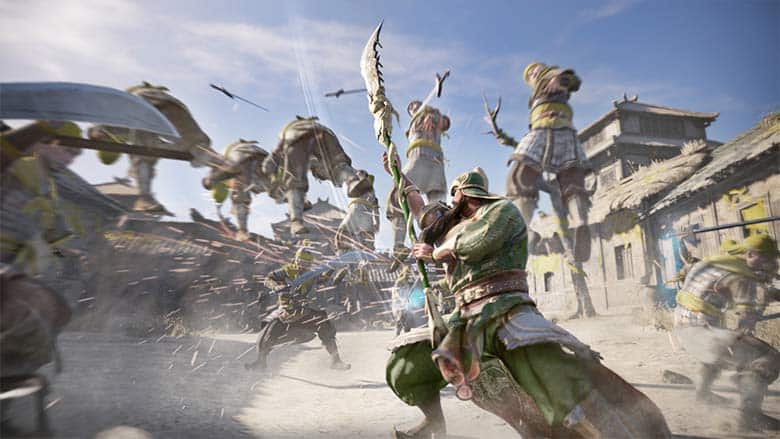 These changes aren’t just for aesthetics alone, they will actually impact gameplay and can lend you advantages during certain situations.  Attacking an enemy stronghold at night will make it easier to accomplish with a stealth approach as enemy’s field of view is smaller during night time. Enemies are also impacted by weather conditions such as rain and this can also be used to your advantage in an assault.

The world includes many environments from snowy mountains to jungles which each have major cities, smaller towns, and outposts for you to take over and spread your domain. Depending on which character you play and how far along you are in the campaign can be peaceful or actually involved in the ongoing war.

This new open world also brings with it some wildlife. Though in my first few hours of exploration I only ended up finding one small herd of deer and once I approached they scattered in the most artificial patterns I have experienced in gaming. There was also the occasional tiger to go toe to toe with which I found to be more challenging than anticipated.  Warriors 9 allows you to hunt these animals and also fish which are required by certain side missions and also for making food.

Though the map truly is huge and could potentially provide hours of exploration, I really found no need or interest in doing so. Compared to today’s standard of a living open world, this one felt dead and artificial to me. Cities and towns, once captured, only had a handful of NPCs, some vendors and some gave side quests. There aren’t many peasants or nobles wandering around, no townsfolk going about their daily duties, and no city guard patrolling to keep the people safe — all of which are basic expectations of an open world game in 2018.

This was one of the aspects of the game that, again, reminded my of my childhood playing on PlayStation. Aside from the brain dead armies of your enemies, there was pretty much no one else around. Unfortunately, no matter what the landscape actually is the game manages to make you feel like you’re in a desert that is all but entirely void of life. I have been too spoiled with open world games such as the Witcher 3, Skyrim, Fallout 4, and Horizon Zero Dawn just to name a few. Unfortunately, the world that Omega Force created doesn’t even come close to meeting my expectations.

Dynasty Warriors 9 also gives the franchise many new graphical upgrades. The beloved characters I remember playing look better than ever. Each character has been given upgraded visuals and appearance with many that have new armor entirely. Though even with this upgrade over warriors games of the past buildings, foliage, and enemies still look dated and bland. One example that really sticks in my mind is the river banks that are sharply angled and abruptly shoot down to the water in almost a 90 degree angle around cities. The cities seem to be made up of copy and pasted buildings that are all looking the same and the textures used for the walls and doors also seem dated. 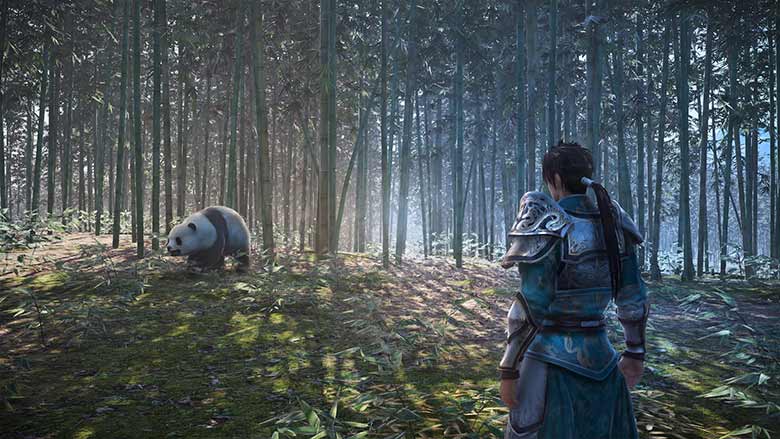 In my time playing I didn’t have one moment where I sat back in awe of my surroundings. I often felt familiar and underwhelmed in the environments like this was a remastered version of a previous Dynasty Warriors game. One of the hardest things to get past for me was the lip syncing that seemed to be from an old school Kung Fu movie. During cutscenes, officer’s mouths move like a ventriloquist’s dummy during the voice acting. It was actually painful at times and made it quite easy for me to lose interest and put the game down.

The campaign in Dynasty Warriors 9 is progressed by completing key missions which are required and each have optional linked missions. Though these key missions can be completed and the story can be rushed through it is more beneficial to complete the linked missions which once completed they make key missions easier to accomplish.  For example, completing linked missions that require you to capture enemy strongholds or open barricaded city gates give you are your army an important advantage. There are many different ways to complete missions, such as attacking at night, attacking from an elevated position, or taking a stealthy approach. This is the first game in the franchise that really gives you that choice and it is a welcomed improvement to the accustomed “just run in and attack everything” mind set of prior games.

The campaign itself is the typical story of three warring kingdoms and the continuous ebb and flow of there control of China. It’s pretty much the same story in every other Dynasty Warriors game and as always depending on which side and warrior you choose to play the story will change as it progresses.

The games hideaways are purchasable buildings scattered throughout the map that act as a sort of housing for your warrior. These buildings once purchased allow the player to buy over 60 pieces of furniture and decorate their hideaway in a limited fashion.  Some of these items such as a stove will allow you to cook, a bed will allow you to sleep and recover health, and a pot will give you the ability to craft items. Other warriors that you have built a relationship with will also visit your hideaway and will appear in their casual attire. Though probably the most important benefit to purchasing hideaways is that it will become another location that you can fast travel to on this massive map. 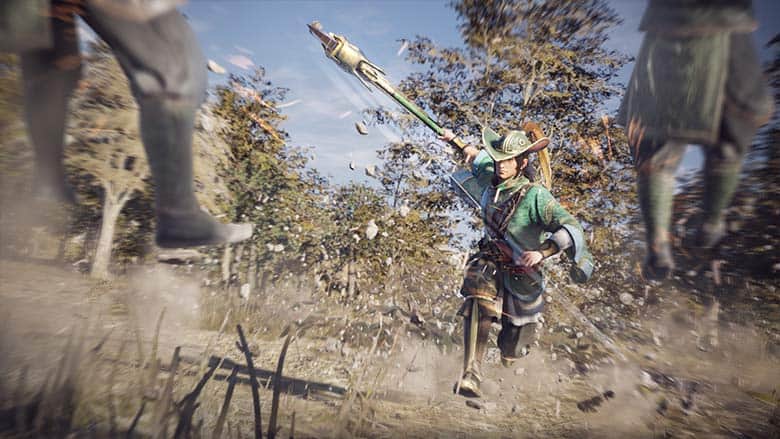 There is also a crafting system that allows you to create weapons, accessories, food, and items. Crafting these items will give you an advantage over your enemies in battle and often will give you a temporary buff.  Most food will give temporary increased speed, strength, defense, and experience for a set amount of time. You will also acquire scrolls as you complete missions and defeat enemy officers, scrolls are basically blueprints that allow you to learn how to craft new weapons and items.

Once a scroll is accrued and all of its required items are collected you can create the item at any blacksmith who is located in a town. Some high level weapons require multiple scrolls to be learned before you are able to craft that one weapon.

Another new addition is the improved combat system known as the “State Combo System”, which is supposed to react and respond to your surrounding conditions and add depth to each warriors attacks. To activate these different abilities you merely hold down R1 and continue to mash the attack buttons. Holding R1 allows your attacks to have an elemental effect, stun enemies, and will also activate your warriors special ability. Though this change was meant to add depth and allow you to chain combos and stuns I found myself just button mashing in the same frantic fashion as my pre-teen self had almost 20 years ago. It really didn’t seem to matter what button I hit as all of the mobs were mindless drones that didn’t seem too aggressive as long and I attacked first sending an entire battalion into the air. Another thing that I seemed to notice in combat is that I couldn’t feel the blows I was inflicting on the hordes of enemies. Sure they went flying into the air or flopped to the ground like rag dolls but I felt that each enemy reacted the same and it didn’t matter how or where I hit them.

Dynasty Warriors 9 tries very hard to bring this 20 year-old franchise up to speed with modern gaming  by creating a huge open world map, adding depth to combat, and a visual update. Even with all of this effort, the newest entry in the longstanding franchise just doesn’t do enough to hook modern players and make them feel apart of a living world. Dynasty Warriors will always have that small niche, almost cult type following, and for those players, this might just be the Warriors game they have been wishing for. But for everyone else, this franchise just continues to feel like it should be left in the past. After the first couple of hours, it became a struggle to keep playing and trying to experience content to be able to write this review. I think that the button mashing days are behind most of us in 2018, and Dynasty Warriors just doesn’t give enough to the modern gamer.

Jordan Harrington
Jordan loves him some Destiny. He’s a recovered World of Warcraft addict looking for the next big MMO. And, pretty much, everything since WoW has failed him.